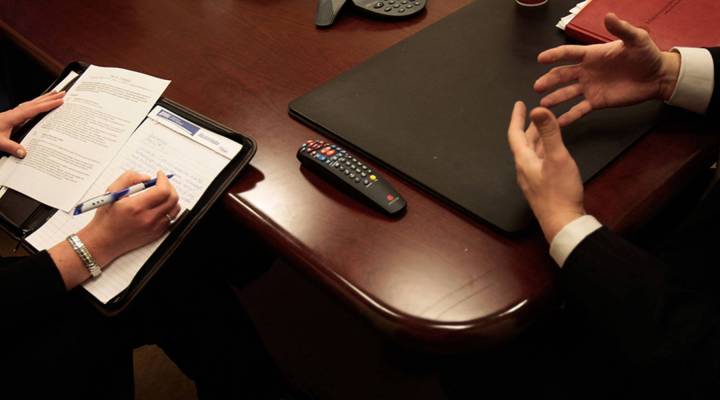 COPY
{Image Description: An overhead shot of two people sitting at a desk in an office setting. The individual on the left is holding a folder and is writing notes on a notepad, while the individual on the left is mid-gesticulation. The desk is a dark brown, and has various objects placed on top, including a phone and a remote control.] Chris Hondros/Getty Images
Economics of Disability

{Image Description: An overhead shot of two people sitting at a desk in an office setting. The individual on the left is holding a folder and is writing notes on a notepad, while the individual on the left is mid-gesticulation. The desk is a dark brown, and has various objects placed on top, including a phone and a remote control.] Chris Hondros/Getty Images
Listen Now

Hundreds of listeners wrote to Marketplace Weekend about their experiences with disabilities. We picked three who were able to talk to us about having “invisible disabilities,” disabilities not immediately evident to the naked eye — a mild traumatic brain injury, attention deficit hyperactivity disorder and dyslexia. But there are many other invisible disabilities that affect an individual in ways that are not obvious to their coworkers: autoimmune diseases like fibromyalgia, lupus, multiple sclerosis, heart problems, to name a few.

People with disabilities are protected against workplace discrimination by two federal laws: The Americans with Disabilities Act of 1990 and the Rehabilitation Act of 1973. But to draw on these protections, workers must disclose their disabilities — a difficult decision, according to the the national ADHD resource organization CHADD, because discrimination often begins after disclosure. Below are three perspectives on how an invisible disability can affect a person’s employment and financial future.

How it affects performance

Carol Phillips lives in North Carolina and has a mild traumatic brain injury from hitting her head. It slows down her thinking process. When she went back to work after the accident, things were fine, but when she got transferred to a different office, she said her bosses were less than understanding.

[Image Description: Carol Phillips is smiling, and facing directly at the camera. The photo cuts off at her chest. Her dark blonde hair is shoulder-length, with bangs that reach just above her eyes. Her collared shirt is brown, with a mint green shirt on underneath. She is wearing bronze and turquoise dangling earrings and a silver and rainbow bird necklace.]

“In my new job, I was a technical writer, and one of the problems I have is word retrieval. So I would use the wrong word, “what” instead of “want,” that sort of thing. So one of the things that I really asked for was somebody to just proofread my work. And my boss said no. If I’d had the accommodations that I asked for, my job performance would have been better, and I think that I would’ve stayed employed — I certainly wanted to stay employed. It was the only choice I had, was to go out on disability or be fired. And I went out on disability. It was the better choice, but it’s certainly a decrease in lifestyle and everything else. And I felt literally worthless. Absolutely worthless.”

Today, Phillips is a published writer of articles, short stories and haiku, and she has regained a sense of self-worth. “The challenge is to find out who you are that’s independent of your job or your task. … I think I have.”

To disclose or not disclose, that is the question

Valentino Perez lives in the Bronx in New York and has held many jobs in his lifetime. He’s worked at a boarding school, in tutoring programs, at a factory and at a card-writing company. At the latter, he said he was let go for lack of punctuality — a result of his ADHD. He also has dyslexia.

“For a while, I didn’t disclose [my disabilities] at all. I just played along, like most people, and just kind of blended in. If things got difficult, I forced myself to either learn what I needed to, or find tools to assist me and kind of do it secretly between employers, and stuff like that. So what I try to do is I act as if I’m normal signing up, and once I have the job and I start filling in the paperwork is when I explain that I have a learning disability. Because I assume by then that if I was fired very quickly after that announcement, legally, that would make it difficult for them [employers] — sadly enough — to not dismiss me so quickly or so brashly.”

At that point, Perez said, he asks his employers for the reasonable accommodations that he is legally entitled to. For Perez, those accommodations are more time to read documents and emails, and for emails to be reworded when he doesn’t understand a sentence. He also uses a text-to-speech application.

[Image Description: Carry Croghan sits in a blue denim shirt, holding her pet rabbit Godiva in her arms. Her dark brown hair is pulled back into a ponytail. The photo cuts off at her chest. She is smiling and facing the camera.]

Carry Croghan, who is severely dyslexic, called in from North Carolina, where she works for a research agency. Like Perez, she uses text readers in order to get through the documents she needs to read.

“For many years, I didn’t ask for reasonable accommodation at my workplace, but the more and more communication became more written communication, it really started to put me at a disadvantage. So finally I got a text reader. As well as being a mathematician, a statistician, I have a master’s degree … but I read and write at a fifth-grade level. The organization that I work for uses the academic model for advancement: first-authored, peer-reviewed journal articles. So the fact that I am not a very good writer, I have no advancement potential.”

For Croghan, asking for accommodations throughout her education and professional life has been difficult and often met with criticism. But, she said, “reasonable accommodations aren’t special treatment. They allow us to play on an even field, they just allow the employee to reach their potential.” 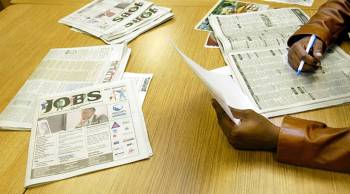