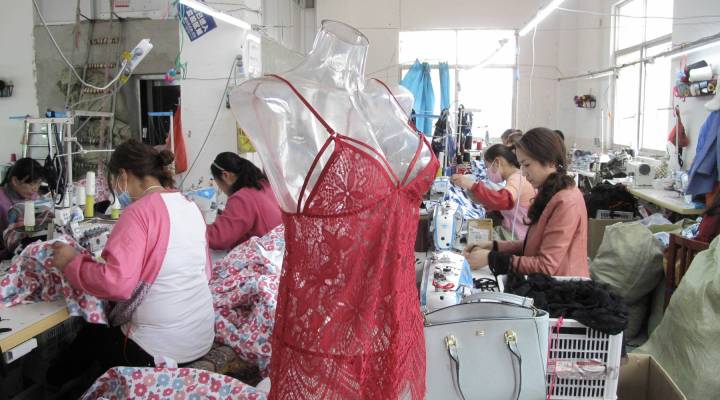 On a dusty road in China’s eastern province of Jiangsu, a slim, middle-aged man stood in front of an open truck and played an announcement through a speaker.

That’s less than 20 cents a pound, which is cheap even for China. Guanyun County, some 300 miles north of Shanghai, used to consistently rank among the poorest areas in this province.

“When I was growing up, many places were run down. The streets were narrow and dirty,” said Lu Xijuan, a resident and head of the county’s government e-commerce division.

But the rural county with a population of just under a million has undergone a dramatic transformation. High-rise apartments and tree-lined roads have replaced rice and wheat fields.

“It’s like the county got plastic surgery and suddenly it had become very beautiful,” Lu said.

The change was partly due to a budding industry producing lingerie and revealing costumes in this sleepy county.

Entrepreneur Lei Congrui, 27, was among the first wave of manufacturers.

Lei said his entry into the industry was purely “accidental.” His journey began two years before the financial crisis in 2008, when he was still in high school.

“My mom was forced to close her shop in 2006, after her building was slated for demolition. She had to get rid of her inventory fast because our family needed the money. Someone suggested that we open an online shop,” Lei said.

Since his mother didn’t know how, Lei said it was up to him to help his mom open an a virtual shop on Alibaba’s Taobao, sort of like Amazon.

Once he sold his mother’s inventory of children’s clothes, he branched into selling slippers, cosmetics and eventually added condoms and cheap lingerie to the mix.

Lei Congrui drew simple designs so that housewives could easily learn to sew the product.

When the financial crisis hit in 2008, scores of factories in southern China closed as Americans and Europeans bought fewer cheap goods. Some 20 million rural migrants were out of a job.

Guanyun County, which was largely subsisting on wheat and rice farming, was insulated from the financial turmoil.

Yet, when China’s government tried to drive economic growth by calling on its citizens to spend more, Lei noticed one category of items in his online shop sold particularly well – cheap lingerie.

“I would order a few hundred pieces, but the supplier would come up short every time. I had no choice but to produce the lingerie,” Lei said.

His setup was modest. In 2009, Lei Congrui and his family invested roughly $50,000 to buy fabric and cutting and sewing machines. He learned how to sew and drew up designs simple enough for his staff of seven, mostly relatives, to produce.

Next, he recruited sellers. His family, friends, neighbors, even his middle school teacher’s wife joined in.

“A lot of people didn’t even know how to use the internet. I had to help them open online shops, so that they could sell my products,” Lei said.

Lei Congrui said his designs were copied so much by local competitors that he switched to the export market in 2014.

In recent years, his sales have averaged $7 million to $9 million annually.

Some of Lei’s designs sold so well, other factories started copying.

“After our designs were copied, the prices went down. We couldn’t make a profit,” Lei said.

In 2014, as Western economies recovered, and foreign sales picked up, Lei switched his focus from domestic consumers to exports.

When Lei needed to fulfill big orders, he would call on a network of housewives from the village who could sew from home and cut down on the cost of work spaces.

He is one of 500 manufacturers in Guanyun County employing some 20,000 workers directly. Three out of five intimate apparel and revealing costumes sold online in China come from this county.

A job posting for Midnight Charm’s lingerie factory offers salaries between $600 and $900 a month, which is higher than some factory work in China’s megacities.

The disposable income for villagers nearly tripled from 2008 to 2017. Yet it wasn’t easy for the industry to be accepted in this conservative part of China.

Lei said when he first started out, workers felt embarrassed about working in the industry, and some even quit when they realized what the products were.

Li Jiaojiao, 23, doesn’t have the same reservations about working for Midnight Charm. She joined the firm as a seamstress a few months ago because the hours are flexible, and the salary, starting at $460 a month, is higher than for other jobs offered in the area.

But like the rest of the staff who spoke to Marketplace, Li said she would not wear the flimsy lingerie and costumes she sewed.

“I still don’t like the look of them,” she said.

Seamstress Chen Xinwei, 36 and a mother of two, blushed when asked if she would wear the garments.

“Some of the designs are pretty, but they don’t cover much. I wouldn’t wear them,” she said.

Like many families in China’s rural areas, Chen’s husband left to find work in the bigger cities and sends money home.

Guanyun County government officials would not disclose to Marketplace how many residents had migrated to urban centers, but they hope the budding lingerie industry could attract these workers back. The government has been planning to invest more than $450 million to help manufacturers upgrade.

“At the moment our lingerie is in the low to mid-level range. We need to help companies scale up and create brands to compete with others,” said Lu of the county government’s e-commerce division.

A digger across from Lei Congrui’s warehouse prepares the ground for his next lingerie factory site.

This type of government support for China’s industries is part of the reason trade relations with the United States have been tense. Lei said he’s not worried about the U.S.-China standoff, even though nearly half of his products are shipped to America.

“If the U.S. doesn’t want our products, we can sell more to Africa,” he said.

Business is so good that Lei said he’s already building an even bigger factory across the road from his present one.