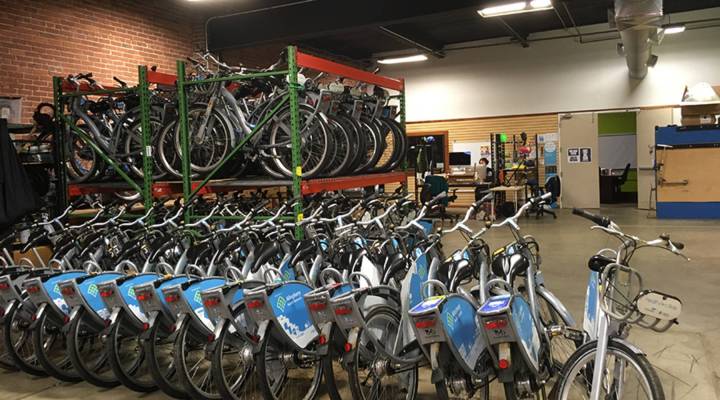 On a busy street, outside the headquarters for Pittsburgh’s bike share program, staffers are unloading a shipment of nearly new 200 bikes. The city’s Healthy Ride program is growing from 50 stations three years ago to 175 this year. David White, who runs the program, said growth was always the plan because many bike share programs like his are nonprofits and start out with a small amount of seed money from grants and corporate sponsorship. To lure more funding, they need to show they’re successful, and initial success means putting bikes mostly in places where they’ll get used — that’s transit hubs, spots with lots of foot traffic and touristy areas which tend to be more affluent. Often overlooked are poorer, blighted neighborhoods. This strategy has left bike share programs open to criticism that the users tend to be young, white and have a higher income.

Bike share programs have proliferated in American cities over the past decade. But there’s a growing body of research that finds they’re not always equitable in terms of where stations are located or who has access to them. A 2016 study from the University of Vermont Transportation Research Center looked at bike share programs in seven cities from Boston to Seattle. It found that white, college educated and higher-earning people all lived in closer proximity to bike share locations than blacks, non-college educated and lower earners.

At Portland State University, urban planning professor Jennifer Dill looked at bike share programs in low-income neighborhoods in New York, Chicago and Philadelphia. She found only 4 percent of respondents there were bike share members. She said the systems can be an asset but, “when they aren’t serving the entire community that’s not a good thing especially if there’s public dollars involved in these systems.” Which typically they are, much of it in the form of federal transportation grants. Researchers like Dill say a big part of the demographic discrepancy in bike share usage is the way bikes are rented — many of them require apps and credit cards — that means people without smartphones or cards can’t use them.

Another reason  is that not all neighborhoods are bike friendly. Much of that is rooted in planning decision made in the past, according to Gabe Klein, who got Capital Bike rolling in Washington D.C. 10 years ago. He said that during urban renewal in the ‘60s, highways were largely plunked down in black or brown neighborhoods.

“Here we are 50 years later and we’re dealing with the impacts still and we have these big wide thoroughfares sometimes there are four five six lanes,” he said. And that doesn’t lend itself to cycling. But research shows demand is there. Dill says nearly three quarters of low-income residents she surveyed thought bike shares were a good idea.

Recently, cities have been trying to make bike shares more accessible. Philadelphia has a cash payment option. Boston offers discounts to people with food assistance cards. In Pittsburgh, bike share director David White closely watched what happened with programs elsewhere. When Healthy Ride was established a few years ago, he said it “really was kind of a reaction to some of those other cities.”

To get the demographics of riders to match the demographics of Pittsburgh, the cost was set at $2 per half hour – around the cost of a bus ride. There isn’t a big sign-up process – no smartphone or credit card hold needed. And since October, anyone with a transit card can use a bike for 15 minutes for free.

“We wanted to make a model where it felt like an easy way to access just another transportation tool,” White said.

Joi Roboch signs Dino Lombardo up for the Pittsburgh Bike Share program at the organization’s office.

So far, about a thousand more transit users have tried Healthy Ride. Recently, while White’s staff were unloading bikes from a shipping container, Dino Lombardo and his friend Ross Bucaro walked up.  They had heard that they could use their transit cards to use the bike share. Both men live in subsidized housing and collect disability. Bucaro doesn’t have a smartphone and, like Lombardo, doesn’t have a credit card. Most months, he said, there isn’t any leftover money.

But now they can ride — although for Bucaro, there’s another barrier: he hasn’t been on a bike in about 40 years.