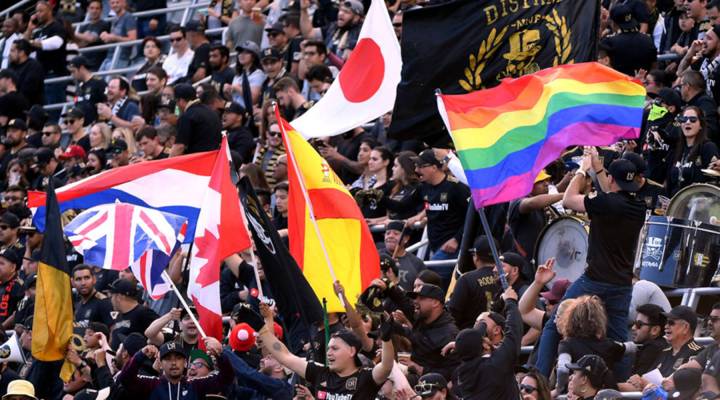 COPY
Fans fly the rainbow flag before the game between New York City and Los Angeles FC at Banc of California Stadium on May 13, 2018 in Los Angeles, California. Harry How/Getty Images

Fans fly the rainbow flag before the game between New York City and Los Angeles FC at Banc of California Stadium on May 13, 2018 in Los Angeles, California. Harry How/Getty Images
Listen Now

FIFA’s policy states that it has a policy of “zero tolerance for discrimination based on sexual orientation” — and that’s come up a lot in advance of this World Cup because of Russia’s “gay propaganda” law, which many see as a ban on promoting or acknowledging LGBT rights and culture.

Yuval Weber, a fellow at the Kennan Institute at the Wilson Center, joined Marketplace Weekend to explain how FIFA, Russia and World Cup sponsors interact to make rules.

The host country already has laws in place

In the case of Russia, there are actually quite a few laws on the books that are at odds with FIFA’s mission to attract a large stadium audience and to uphold its human rights standards. In addition to the gay propaganda law, Russia has very strict requirements for tourists — most need a visa to visit. These issues present a challenge for FIFA, but not an insurmountable one.

Organizations like FIFA that host big international events have a lot of power — FIFA (and the International Olympic Committee) can use their influence to suspend or work around laws in the countries where they host games. In the case of Russia’s visa requirements, FIFA has a workaround: a ticket can be used as a visa. Yuval Weber says that the same goes for tax laws and labor laws, which FIFA can ask hosts to suspend in order to build stadiums and rake in the profits at the World Cup.

Corporate sponsors have a lot of clout, too

At past games, FIFA has used their law-changing power at the behest of major corporate sponsors. At the 2014 World Cup in Brazil, it was pressure from FIFA that made Brazil approve the sale of alcoholic beverages in soccer stadiums during the tournament. That pressure from FIFA was, perhaps unsurprisingly, sparked by pressure from Budweiser, a major sponsor of the World Cup.

So how about those human rights standards?

A rainbow flag flies before the Sky Bet Championship match between Barnsley and Leeds United at Oakwell Stadium on November 25, 2017 in Barnsley, England.

Yes, FIFA has exerted its power in the name of beer sales. But when it comes to the gay propaganda laws in Russia, they haven’t pushed for change. Instead, Russia has agreed to welcome and protect all visitors equally, and officials say LGBT fans visiting Russia won’t be arrested under the propaganda laws.

But anti-gay violence has increased in the five years since the laws were put in place, and LGBT fans have been warned by human rights groups that public displays of affection may not be safe.

Weber says that visitors can expect heightened police and military presence to prevent any violence, and English speaking volunteers stationed to help out. But although FIFA could have asked for a suspension of the gay propaganda laws across the board, they didn’t. Which brings us back to the corporate sponsors.

“Private companies have a lot of money, and they can dictate quite a lot to sovereign governments,” Weber said. Sponsors of the 2018 games have expressed concerns about the Russia World Cup as well as the upcoming games in Qatar.

Many of the usual sponsors are taking a step back, reluctant to associate too closely with Russia or with FIFA itself. Those that do run ads will probably stick more to soccer than politics.

Corporate sponsors love a feel good story, and tend to focus on the positive. When the World Cup was held in South Africa in 2010, sponsors made a big effort to incorporate the end of apartheid into their advertising. Weber says that the same cannot be expected in these games. Sponsors are more likely to de-emphasize the Russia element and highlight the tournament’s big stars.

While some giants like Coca-Cola, McDonald’s and Budweiser are sticking around in 2018, many of the biggest sponsors of the 2018 game are Russian, Chinese and Middle Eastern companies. Gazprom, a Russia national gas business, Qatar Airways, and Chinese real estate firm Wanda Group all have top sponsorship spots.

Weber says that many of these newer sponsors are less concerned with voting with their dollar to change Russian laws and more concerned with “burnishing their soft power.”

The Russian games will be something of a test for FIFA and for sponsors. The 2022 World Cup will be held in Qatar, and FIFA is already fielding concerns about human rights standards there. Morocco, where homosexuality is a criminal offense, is still in the running to host the 2026 games.