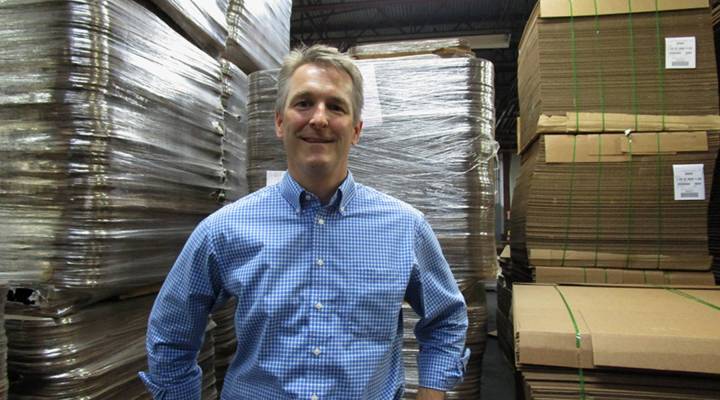 Marketplace host Kai Ryssdal took a trip to Columbus, Georgia to do an informal survey of American manufacturing by looking at three slices of how we make things in this country today.

We’ve told you about a a textile company that’s had to reinvent itself as the trade economy changed around it.

We’ve told you about an iron foundry where some of the new changes to American trade policy are more than welcome.

Anker started Ankerpak in Columbus, Georgia in 2004. Originally, Ankerpak did full-service packaging — wrapping up products that other companies had made, getting them into boxes or onto shipping pallets and sending them on their way.

When he heard that one of his customers was closing a plant and offshoring it to China, he saw his chance. “I ran to them and I said ‘Wait, why are you going to China? Can I do that?’ And they said ‘John we’re moving all our manufacturing. All you’re doing is packaging for us.’ And ended up they came back and gave me an opportunity to keep some of the manufacturing here as opposed to moving it as originally planned to China.”

That’s when Ankerpak transformed from a just packaging company to a full service manufacturing company. The first product they manufactured were bobby pins, a type of hairpin.

“It was a partnership in its truest sense,” Anker said. “They already owned the equipment. They were moving it, and closing it down, moving to China. So, their choice was number one: send it to China like they planned on just move the equipment to China, China has the labor they had the supply side and Goody products had the demand side. And so, we picked up their equipment gave them a second option, that was: outsource it to an American company at the same price as an overseas provider. I mean the same price.”

Anker competes on flexibility more than price. He’s profitable, maybe not as profitable as others might be, but he hustles. Ankerpak has three facilities in Columbus.

Anker showed Ryssdal around the one where the manufacturing happens. This is where Ankerpak makes composite fabrics, commercial refrigeration compressors and more.

One of the many machines used to manufacture products at Ankerpak.

After Ankerpak started making bobby pins, Anker found out about another company that was making pencils, pens, erasers and other office products. That company was closing down its Tennessee-based factory and moving its operations to Mexico.

“We ran to them and said, ‘What can we do for you?'” Anker said. “I tell people I’m like the old Life commercial. ‘Give it to Mikey, he will eat anything. And Mikey likes it.'”

Anker: They were closing this whole factory down and moving to Mexico and when I ran in there said ‘What can I do?’ They said, ‘John, it’s all been slated. Here’s the plant lay out in Mexico. Here’s where these machines are going.’ I left, I came back home and they called me two weeks later and said, ‘you know we’ve been thinking about it, we might give you an opportunity to quote on some of the stuff that might be suited to keep here in America.’

Ryssdal: This is going to sound worse than I mean it to sound, but you almost don’t care what you’re making — so long as you’re making something here in Columbus, Georgia.

These grease pencils, known as Sharpie China Markers are manufactured and packaged at Ankerpak in Columbus, GA.

Ryssdal: Why are you here in Columbus? Just because you’re from Columbus?

Anker: It’s a town I call home now. I’ll tell you there’s a lot of good things about being in this town. We’re an old mill town. Since NAFTA came into effect, just the textile industry alone has lost over 2.5 million jobs — direct jobs, not counting the ripple effect.

Ryssdal: Are you worried, by the way, about NAFTA or TPP or the trade tariffs or any of that stuff that you hear in the economic headlines right now?

Anker: I’m only mostly worried about our country if we continue on the same path.

Anker: Well as it relates to NAFTA, my workers would like to make more money. I’m competing, and I don’t mind competing on a global market. But I want it to be apples to apples. So, I’m worried that if we don’t modify or put some more bigger walls up on NAFTA, it’s going to continue to be a slow bleed long term that we won’t ever be able to continue the trend as a world class leader and economic leader.

A sign inside Ankerpak Packaging Company reads “What if… you could outsource to an American company at the same cost as an overseas provider?”

Anker’s a big part of the local economy in Columbus. He provides around 70 entry-level manufacturing jobs. He does it by recognizing his place in Columbus’ economy, and in the global economy, as well.

Ryssdal: So, let me ask you this: Do you think the future with all respect to what you’re doing here right, is this the future of American manufacturing?

Anker: Well, we hear a lot of rhetoric about high-tech, high paying jobs. It’s not rhetoric, it is what we want as a country. I like it, I didn’t mean to say rhetoric. I love those jobs. But I feel like my gift is to help lift people up to put them in those jobs. Now, there’s other people that are out there now that are working at these high-tech jobs that have now bought a house and a car. They’re married with children. And they came right here from Ankerpak on minimum wage is where they started. There’s too many people falling through the cracks. I used to say our school system is a Jeffersonian system. We’re scraping the gems from the rubble. That’s the way it started. That’s still the kind of way it is. You got to fit in this mold of graduating in 12 years or you’re just no good. Or you got to go to college, or you’re just no good. If you got a lot of rubble and you put it down on a dirt road, you can build a really nice highway. Well, I’m kind of proud of Ankerpak. We’re building a highway and we’ve got a wonderful culture of family here.

Ryssdal: So, what I hear you saying is you want these jobs to be worth something.

Anker: I want them to be worth something.

Anker: That’s exactly right. It’s a stepping stone. I can tell you time after time people that we’ve lifted up and today they’ve gone on and they’re doing high-tech manufacturing and I’m proud of that. That’s my mission and I think we ought to be doing more of this right here in America.

Manufacturing accounts for over 12.5 million jobs in this economy. Between Ankerpak, the Boyd brothers at Goldens’ Foundry, and Monte Galbraith making textiles, we’ve accounted for about 300 of them in this series. Call it a non-representative sampling, sure. But the fact remains, that politics, trade policy, and the global economy have been changing U.S. manufacturing in the past couple of decades.