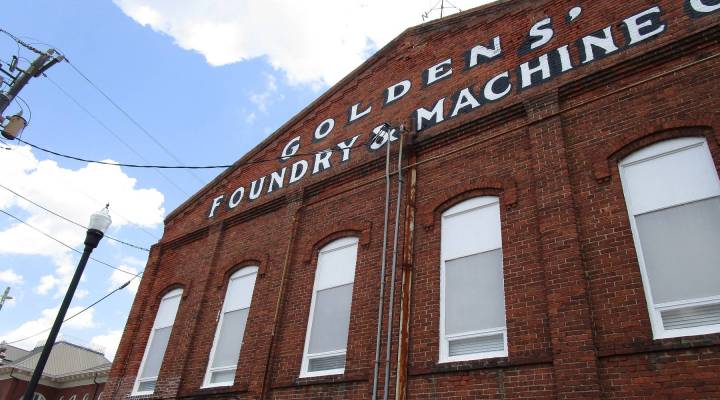 Over 12.5 million people in the United States work in the manufacturing sector. That’s nearly 12 percent of U.S. GDP. So what we make and how make it matters. Manufacturing has changed a lot over the past several decades, so Marketplace host Kai Ryssdal went to Columbus, Georgia, to get an understanding of what manufacturing in America looks like today.

We’ve told you about a business owner running a denim factory in Columbus who had to stop making denim because of changes in the global economy.

We also talked with Ed and George Boyd Jr., brothers who are fifth-generation owners and managers of Goldens’ Foundry and Machine Co. Their family established their manufacturing business in 1882, and they like where trade policy is heading under the Trump administration.

Ed Boyd: We had a little lull in the business, and it’s come back pretty strong with some new work that we’ve got going. The cookers that we make are starting to get kind of busy as well.

Kai Ryssdal: The cookers? The cast iron and grills?

Ed: And then just the industrial economy’s picking up.

Ed: We tend to think that it’s some of the things that are happening up in Washington right now.

Ryssdal: You’re seeing that you guys are feeling that here?

George: After that, we went into a three-year lull, where order books flattened out, and you heard people talk about the more gradual recovery that’s what we were seeing. But now over the last 18 months, it’s revved up considerably.

Ed: Oh, I think it’s a little bit of everything. Certainly, it’s having more confidence that the administration is more business friendly, and you can feel a lot more assured if you’re going to go out and invest in a piece of equipment, you’ll have the opportunity for the business to support it to pay it back.

Ryssdal: Is that what you’re hearing from your customers?

George: And, you know, in terms of the impact of the tax bill, we think that’s going to be felt this year and in the following years. But I think mostly it has been, it’s been a belief that this administration is moving things in the direction of bringing manufacturing back here, making this a place to continue to build things.

Ryssdal: Just to get this out of the way, are you bothered by the chaos, or do you guys just want to look at the bottom line and forget all the tweets and all the other stuff?

Ed: I think all and all, the direction the country feels like it’s heading right now is one we agree with. I would do without Twitter for him in a heartbeat if we could. But the noise doesn’t affect the day to day.

George: And look, we’ve had a consensus for the last 20 years in Washington, and it’s been a consensus that has pretty steadily moved manufacturing out of our country. So if it’s a little chaos to interrupt that kind of consensus —

The financial crisis was a turning point for Ed and George. Before the recession, George was a lawyer and Ed was a banker. They came back to run the family business.

Ed and George Boyd Jr. are fifth-generation owners and managers at Goldens’ Foundry and Machine Co.

Now, 10 years after the financial crisis, business for Goldens’ Foundry and Machine Co. is going well. There are 200 employees in the Columbus, Georgia, facility and the company is looking to fill about 40 positions.

Kai Ryssdal: You know, it’s funny, there aren’t as many people here as I thought there would be. But at the same time, there has to be a certain number of people here to get this done. My point is I guess you can’t automate all of this right?

Ed Boyd: You can’t. There’s certainly more automation that we could apply, but you’re going to always have to have attendants monitor the automation, automated pouring, core setting, there’s opportunities out there.

George Boyd Jr.: One of the things that drives us crazy is when we hear people talk about the reason you don’t have as many people in manufacturing today is all because of automation. It’s not because the jobs have left. And that’s just not true. There certainly has been automation. If you had been here 40 years ago, this line would have been floor molding, and it would’ve had five guys to a floor mold, very labor intensive. So some of those jobs have been replaced through automation. We have a lot of people here. And you’re always going to have a lot of people here. And it’s really just trying to hide the ball and the fact that those jobs have been sent to Mexico and overseas.

Ryssdal: What do you make of the argument that, you know, we’ve been just in steel and metals and by inference iron as well, we’ve under-invested in our steel capacity in this country since the end of World War II?

George: Yeah, I think there’s truth in that, especially when you look at what’s happened over the last 40 years as we’ve allowed those jobs to be to compete against people that aren’t competing fairly. I mean, there’s no way when you ask me today to compete against China on a piece price basis, it’s just not a fair comparison at all. So where’s the money from the tax reform going to go first? It’s going to go to reinvestment. We’ve put over a million dollars every year just into new equipment to keep our processes going.

One of 200 workers at Goldens’ Foundry and Machine Co.’s Columbus, Georgia, facility.

Not all of the Trump administration’s policies help Goldens’ bottom line. The Boyd brothers say they’ve seen a small increase in the price of steel since president Trump’s steel tariffs went into effect in March.

“To whatever degree those tariffs move the price of steel, we’re going to feel it,” George said, “but it’s about time that we start doing something to protect our domestic industry. And so, if you don’t have the ability to make steel here, you are losing a core industry that we need in our country. We’d like to see those protections spread in a way that we’ve got a balanced fair-trading platform with other countries.”

Trade policy in 2018 is wrapped up in global politics. The Boyd brothers are counting on the politics of the moment to help them compete in a global economy that’s changed around them and their slice of American manufacturing.