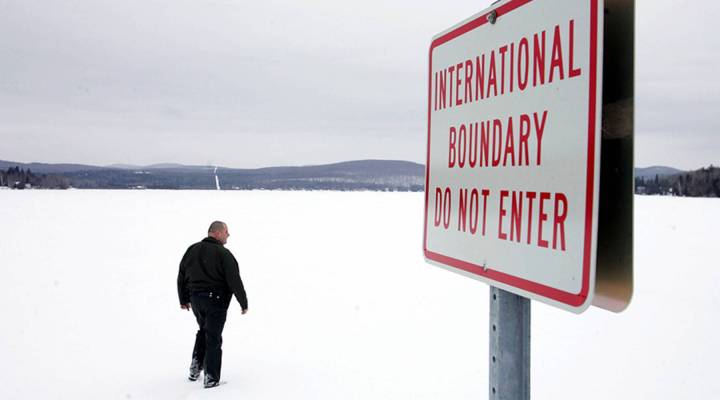 COPY
A U.S. Border Patrol agent walks onto a frozen lake that is split between Canadian territory to the right and the United States in 2006 near Norton, Vermont. Joe Raedle/Getty Images

A U.S. Border Patrol agent walks onto a frozen lake that is split between Canadian territory to the right and the United States in 2006 near Norton, Vermont. Joe Raedle/Getty Images
Listen Now

Canada is one such country. But the points-based immigration system there has had an unintended side effect: With the prioritization of high-skilled workers, the country has worsened its low-skill labor shortage, which is entering its third year.

“If you go into Quebec City now, the unemployment rate is only 2.7 percent. This is full employment,” said Richard Vigneault, spokesperson for Olymel, one of Canada’s biggest food-processing companies. “So you don’t find anyone, it’s very tough to find employees.”

Olymel needs employees across all sectors. But the shortage is especially pronounced for drivers and maintenance workers, and people to work the production lines, slaughtering chickens.

“We have 1 million jobs to fill for the next five years,” said Yves-Thomas Dorval, who heads up the Conseil du Patronat of Quebec — sort of a chamber of commerce equivalent. That’s a million jobs in Quebec alone, a province with a smaller population than the five boroughs of New York City.

A classic solution to a labor shortage is to import more workers. Canada took in close to 300,000 immigrants in 2016, nearly half of them through the “points” system, which favors advanced degrees and qualifications. But after Trump ended temporary protected status for thousands of temporary immigrants in the United States, Canada has seen an influx of new workers that are helping to solve the labor shortage.

“Every year about 1,000 Haitians come,” said Marjorie Villefranche, director of the Haitian community organization Maison D’Haiti in Montreal. “Last year it was 12,000.” The last time Canada saw such a huge influx of Haitians, she said, was after the horrible earthquake there in 2010.

A spokesperson for food processor Olymel presents job opportunities at a career fair at Maison D’Haiti, a community center for Haitians in Montreal.

Villefranche said asylum seekers coming from the United States learn about Maison D’Haiti almost immediately upon presenting themselves at the border for arrest and processing. The immigration court and appeals process there can take two to three years, and in the meantime, asylum seekers are allowed to work.

Companies like Olymel recruit at Maison D’Haiti several times a year. Marc Melfort attended one of its career fairs. He fled political violence in Haiti in the early 2010s and arrived in the United States in 2013, working as a driver in Georgia and then Virginia. But when the Trump administration announced it would end his temporary protected status, he figured Canada would be a safer bet.

“There the president says, ‘No immigrants, we don’t want immigrants.’ That’s why [we] come here, [we] get afraid,” he said. Now he’s looking for a job at Olymel on one of its pig farms. He said with the company seeking him out, he feels valued and adds that America could learn something from the example.

“Without immigrants, a country is not gonna be OK,” Melfort said.

Olymel has hundreds more positions to fill, and while asylum seekers may have to leave after two or three years, for now they provide a valuable service. They couldn’t come to Canada through the regular system, but after crossing illegally, they’ve become essential.