“Avengers: Infinity War” isn’t just a showcase for more than 70 of Marvel’s popular characters, it’s also a big stage for advertisers—with more brand partnerships and product placement than any Marvel Studios movie to date. One of the brands you’ll see on the big screen is Rocket Mortgage, a service from Quicken Loans that lets you get mortgage approval in minutes using an app on your phone.

Rocket Mortgage’s partnership with what’s already expected to become one of the highest grossest movies ever began with a TV commercial during the NCAA’s March Madness. It shows a young woman wearing headphones traipsing through middle of an “Avengers” battle scene. She’s filling out a mortgage application on her phone, oblivious to the fact that Dr. Strange and Iron Man are using superpowers to save her from exploding debris.

“Rocket Mortgage by Quicken loans makes the complex simple,” a voiceover says, “giving you superhero levels of confidence. Understand the details and get approved in as few as eight minutes, so nothing stands in your way.”

The company launched in 2015, with a controversial Super Bowl Ad. It’s been marketing aggressively to millennials since. Francis Ridder first heard about the brand last year while listening to college football games on satellite radio.

“They were bombarding the airwaves with ads at that point,” Ridder said. “So it’s like, ‘well hey, might as well just give it a shot.’”

The 35-year-old Nebraska Cornhusker fan was planning a move from Los Angeles to Omaha, to buy his first home.

“The whole online-only thing was appealing just because it made it easier to start the process,” Ridder said.

Most traditional banks have pulled back on mortgage lending since the recession, following big penalties and new regulations. Non-banks have filled the void, and Quicken’s Rocket Mortgage plays a starring role, competing on convenience.

“People have been comparing getting a mortgage to going to the dentist,” says Mike Fratantoni, chief economist at the Mortgage Bankers Association. “This is about a technology change and a business process change to try to avoid needless paper shuffling.”

Fratantoni says the cost of processing mortgage loans has more than doubled since 2008. New mortgage originations at the big banks are at their lowest level in years. And Quicken surpassed Wells Fargo in last year’s fourth quarter to become the country’s largest retail mortgage lender.

“This is a machine that is right now working quite well,” said Susan Wachter, real estate professor at The Wharton School at the University of Pennsylvania.

She says these non-bank lenders have kept the market alive.

“We have mortgage rates still at historic lows,” said Wachter. “It is difficult still  to become a first-time homeowner, but less so than if we didn’t have the Quickens of the world stepping up to play.”

Non-bank lenders are more lightly regulated, and their credit scoring models haven’t really been tested yet.

It’s worth noting the Department of Justice is suing Quicken for allegedly misrepresenting borrowers’ income or credit scores to qualify for government-insured mortgages. Quicken denies the charges.

But non-depository lenders now handle the vast majority of government loans through the Federal Housing Administration and VA. Wachter says that means taxpayers could be on the hook if the market collapses.

Quicken is a private company, so we can’t see its financials, but CEO Jay Farner says it has the assets to weather a storm.

“At Quicken, we have built a fortress-like balance sheet that makes us stronger than 93 percent of all the FDI-insured companies or banks in America,” Farner said. 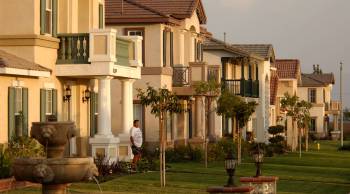 Could falling interest rates mean a pick-up in hiring by mortgage lenders?