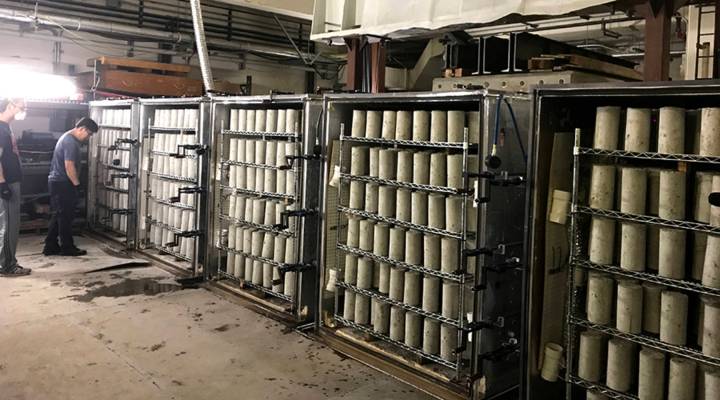 Ten competing teams from around the world are one step away from winning millions of dollars for developing new ways to reduce carbon dioxide emissions. This week, XPRIZE, the company that gained fame for helping launch the commercial space industry, announced the finalists in a contest to convert carbon dioxide emissions into usable materials.

Gaurav Sant, a civil engineering professor at UCLA, is leading a team called Carbon Upcycling UCLA. It has created an alternate form of concrete by replacing the traditional cement component with calcium hydroxide. The material absorbs carbon from carbon dioxide, permanently binding it to the concrete as it hardens.

Concrete is ubiquitous within the built environment, and some estimate its production accounts for 5 percent of the world’s greenhouse gas emissions. Sant said his team’s process has the potential for significant reductions in atmospheric carbon.

“Globally, if you imagine that this becomes the standard of construction tomorrow, you’re talking about maybe a billion, billion and a half tons of CO2 sequestration annually,” Sant said.

The goal of the prize is more than just capturing carbon and storing it underground — what often happens. Instead, it is focused on making the carbon capture process profitable by converting carbon dioxide into valuable materials such as fuel, plastics, chemicals and building materials.

The competition’s director said teams that have made it to the final round have developed systems that take up carbon dioxide efficiently and that have great potential for profitability.

“We look at what is the global size of that market, how many tons per year of that stuff are bought and sold, the idea being that if a team can sell into a large market, then in principle, they could get more CO2 into product and into the economy,” said Marcius Extavour, senior director of energy and resources at XPRIZE.

Some estimates value the carbon recycling market at a trillion dollars by 2030, capturing about 10 percent of emitted carbon dioxide.

“The reason it’s so big is because there’s so many different products that you can turn carbon emissions into,” said Matt Lucas, associate director for carbon capture at the Center for Carbon Removal. “When you can touch so many major commodities, you have a huge market potential.”

UCLA researchers 3-D printed and hardened this object as an example of how carbon can be captured as part of the construction process.

Lucas said the carbon recycling industry is still nascent. He said more than 50 startups are working on carbon recycling in North America and that the XPRIZE competition could help the field achieve similar momentum for carbon capture, which has gained a lot of attention within the past 18 months.

“I think that the Carbon XPRIZE could be that same sort of inflection point for carbon recycling,” Lucas said.

In the meantime, Sant’s team at UCLA is working toward the finish. It has to scale up its process by 10 times and demonstrate it at a coal power plant in Wyoming. The $7.5 million prize would be pretty sweet, but Sant said it’s actually kind of small potatoes compared to what they’ll have spent getting there.

He said his team was already working on its carbon recycling process before the competition and that the competition helped the team move more quickly toward a finished product.

“Competing in the competition maybe made us speed up our timeline, made us maybe think about the problem a little bit more differently than we would have,” Sant said. “Maybe we would have taken a much more academic position towards purely knowledge creation rather than knowledge translation.”

He said winning the prize would not change the way they work.

“You don’t compete in these competitions for money,” he said. “There’s a higher purpose than money in it.”