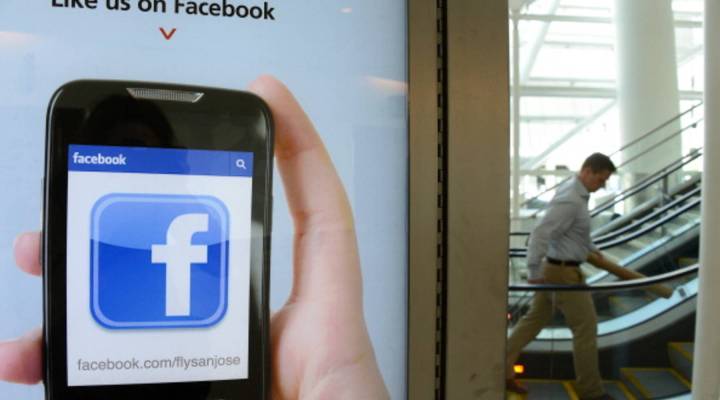 An advertisement for San Jose International Airport suggests to users to 'like' the airport's Facebook page. (ROBYN BECK/AFP/GettyImages)
Listen Now

This article is part of Marketplace Tech’s ongoing series on The Data Economy. You can read the other parts here.

Here’s a fun fact for you. Cookies, the absolute foundation of online ad tracking, the tiny little pieces of code embedded in websites that save information about your password or your browsing history and follow you across the web, were invented all the way back in 1994.

At that time on the World Wide Web, targeted advertising was mostly a matter of creating an online destination for like-minded people to gather, and then serving them ads based on those interests.

“I can remember some of these early platforms, whether it was a Afro-net for African-Americans, whether it was PlanetOut, trying to organize gay and lesbian consumers and sell them products and services,” says Safiya Noble, a professor at the University of Southern California’s Annenberg School of Communication. “All of these early platforms were really about tracking us and organizing us to sell us as a consumer group to big advertisers.”

And the ads were pretty rudimentary, too: banner ads, followed by pop-ups, then pop-unders, then pop-explosions.

But as the size of the web grew to millions of pages of published content and billions of users, and advertising became the most obvious and most lucrative way to support all that content, the tech got exponentially more complex, and increasingly data hungry.

The ability to track you across the web became increasingly sophisticated, so it felt like those shoes you briefly looked at on Zappos were following you to every site you visited. Showing you shoes you might like was called targeting, and then companies figured out how to follow you and show you those shoes later, too — that’s known as “retargeting” — and it’s the “following you around the web” part. And then Facebook figured out how to do things like let a company show you ads based on your posts about a barbecue, or a “like” on someone’s post about a restaurant, and it could do that even if you weren’t actually on Facebook’s site.

Pretty soon, computers were doing most of the buying and selling of ads, based on the context of a website or the information and the behavior of the people likely to see that ad. And fundamentally the more personalized, targeted and individually specific an ad is, the more likely a person is to interact with it, or just click on it and buy something. Hence, all the data.

Over the last 10 years or so, says Noble, advertisers have been more and more interested in the idea of psychologically profiling users, and targeting ads based not just on demographic information, but on personality. That’s what’s called behavioral or sometimes “psychographic” advertising, and the behavior, at least, is a mainstay of social media advertising, where companies like Facebook have the luxury of lots of very specific information about you.

“Advertisers have always been interested in knowing the complex interplay of what goes into the kinds of purchasing decisions that we would make,” says Noble. “This idea of doing it at a mass scale through something like Facebook is a bit of a newer phenomenon, because in the past advertisers were really reliant upon other tools, whether it was surveys, or qualitative marketing, or consumer research firms to get at that nuance.”

Now, all they need is your “likes,” your searches, your email, your YouTube views, your messages back and forth to your friends, your purchase history, location, information about what device you’re using, age, gender, marital status, education … heck, when I checked out my ad preferences on Facebook, it even wanted to let advertisers target me based on my employer and my job title.

Eventually, as we’ll explore in a future story, the idea of targeting users for ads expanded beyond shoes and barbecues and restaurants and into politics — first online, in the form of social media advertising, and eventually, around 2014, even onto television.

Now seems like a good place to note that the two companies that arguably know the absolute most about you, Google and Facebook, account for 60 percent to 70 percent of all the digital ad dollars in the United States. And while Google has had to gather all that data through a huge array of services and technology, most of us just hand it over to Facebook all day every day. Advertising accounts for the vast majority of Facebook’s revenue, and that revenue was $40 billion per year in 2017, and the chart of its revenue growth only ever goes up.

That’s why, as you listened to Mark Zuckerberg’s testimony before Congress this week, one thing was crystal clear: Advertising is Facebook’s business model, and despite multiple senators asking the Facebook CEO if the company would ever offer users the option to pay to remove ads (and presumably the data collection underlying those ads), Zuckerberg repeatedly declined.