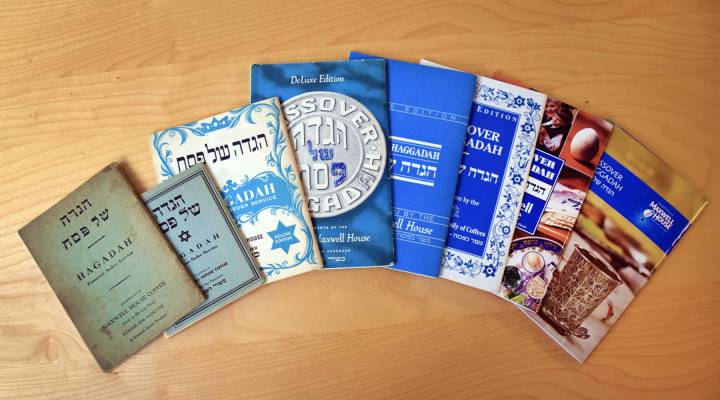 My dad, Mitchell Rosen, jokingly says Judaism has a few fundamental questions: Who wrote the Torah? Why us? And why does Maxwell House make what’s become the standard Passover Haggadah?

For the gentiles reading this, let me spell a few things out. This weekend Passover begins. Jewish people around the world will gather around Seder tables and read from a Haggadah, a text containing the story of the Jews leaving Egypt, along with prayers and commentary. So it’s no wild surprise that my dad is a bit perplexed about a coffee brand originally manufactured in Nashville, Tennessee, somehow having its brand splashed across this religious text.

“I don’t really think anyone knows the answer,” he said. “I mean, just like everybody I grew up with, we would use the Maxwell House Haggadah.”

It wasn’t just his family. It was everyone, it seemed.

Of course, my grandfather would modify it in his own way. He’d sit at the head of the table, his Maxwell House Haggadah alongside crinkled, typed-up notes — for years typed on an actual typewriter — from which he would direct the family to jump to certain parts and skip others. He’d have his discussion points about hot topics of the day that could lead to heated family arguments. And by the time the Haggadot, blaring the Maxwell House brand, were collected at the end of the night, there’d inevitably be new purple splotches dotting their pages — grape juice on some, wine stains on others.

I asked my dad what other brands he associates with the Passover Haggadah.

“The only brand I ever think of is Maxwell House,” he said with a laugh.

And that’s the work of one of the longest ongoing sales promotions in U.S. history.

The original Maxwell House Haggadah from 1932.

In the 1920s, Maxwell House had a problem. Jewish customers weren’t buying their coffee during Passover.

During Passover, Jews aren’t supposed to eat leavened grains or beans. But coffee’s fine, since coffee beans are actually the pit of a fruit. Still, with the word bean in the title, it was ripe for confusion, and many stores wouldn’t sell coffee during Passover. Maxwell House had to change perceptions about its product.

In the 1920s, the company reached out to Joseph Jacobs, the head of an advertising firm that specialized in marketing to Jewish consumers, who got a rabbi to certify that its coffee was indeed fine to drink.

In 1932, the company decided to ratchet up the marketing campaign: Maxwell House gave out a free Passover Haggadah with every can of coffee purchased.

The goal was to infuse the brand with the holiday. It worked.

“It wasn’t a cultural thing, this was business,” Rosenfeld said.

Since then, the Maxwell House version has emerged as a standard Haggadah found in Jewish households. They provided an inexpensive way to give groups of diners the same Hebrew and English texts. Over 55 million Maxwell House Haggadot have been published since the 1930s, according to Rosenfeld.

But it’s not just branding, there’s a trade component at work, too.

“A supermarket wants to give this away, but in order do that, they have to commit to Maxwell House to purchase x number of coffee,” Rosenfeld said.

In 2011, the Maxwell House Haggadah got its first big update since it was originally published. Over the decades, the size of the book changed and the typeface was updated once. Since 1932, the translation had stayed the same.

“Art, thou and hast — it’s just not modern,” Rosenfeld said. “It was time to refresh the book.”

“If you translate it properly and translate it carefully, you don’t need to ascribe a gender,” Rosenfeld said.

But the question remains: Does this ongoing promotion increase coffee sales?