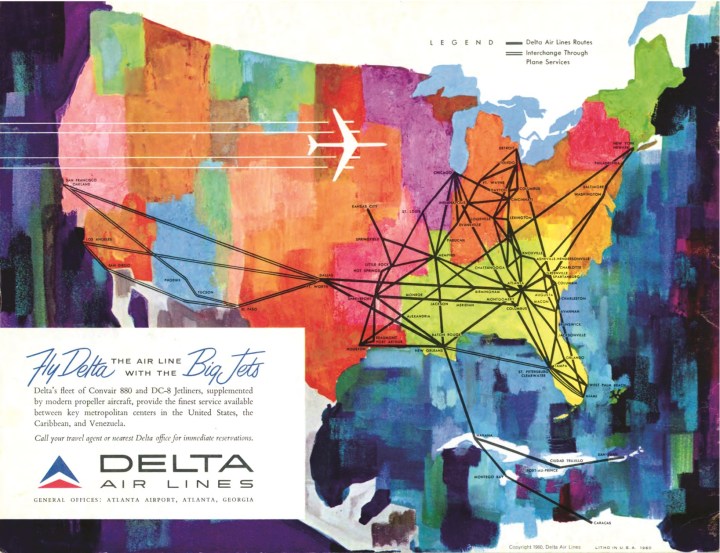 The following is an excerpt from “Airline Maps: A Century of Art and Design,” a new book by Mark Ovenden and Maxwell Roberts about maps and posters used by airlines in their advertising over the last century.

A new branch of cartography took off with the dawn of civil aviation a century ago. Airline maps were completely different from what came before, such as navigational maps used by pilots or even railroad route maps for train riders. Airline passengers did not need to know many specific details about their journey. All they were involved with were the airlines’ departure and arrival cities. To those with a fear of flying, perhaps the lack of detail was a clever psychological trick to entice them onto the fastest-moving machine ever invented.

Such a laissez-faire attitude to geographical accuracy gave rise to great experimentation, as the pages in this book testify. The very concept of whizzing rapidly from one side of the world to the other provided artists and marketers with inspiration. During the infancy of aviation, service maps were able to display in an instant both the proximity of the “colonies” and the viability of the new-fangled airlines over any surface-based transportation (especially the great oceangoing liners). Maps played a part in glamorizing flight and making it feel practical, and as networks matured, they were a valuable weapon in beating the competition.

Yet airlines did provide window-seat travelers with aids to assess what they were passing over and in the twenty-first century the live map on a seat-back screen or even on a handheld device is evolving rapidly. So much so that, in recent years, the tendency of airline websites has been to offer a “point-to-point” drop-down menu with the route laid over something like Google Earth, depriving users of the ability to browse the airlines’ wider offering of destinations on a well-designed map. Luckily for the collectors and students of modern industrial design, corporate identity, and cartography, printed paper maps live on. Keep hold of the next one: it could be collectible.