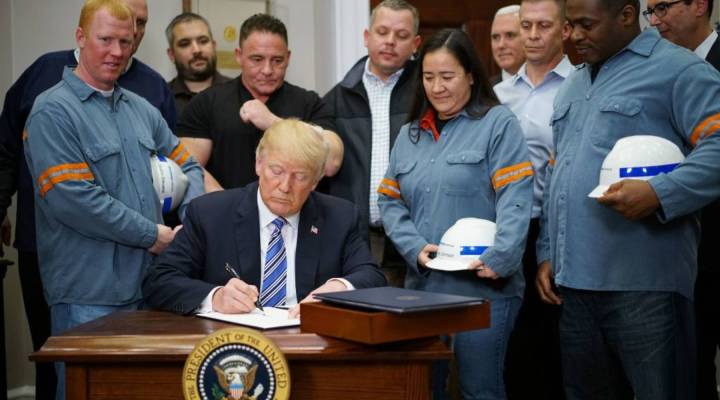 When it comes to fiscal policy, it might seem like politicians and economists would work in lockstep. But in many cases, the politics come first — and that tends to lead to policies with not-so-sound data backing it up. And according to Princeton economics professor Alan Blinder, the fault might lie with economists as much as it does with politicians.

In his new book, “Advice and Dissent: Why America Suffers When Politics and Economics Collide,” Blinder sets out to explore the troubled relationship between politicians and economists — and offer some solutions. Marketplace host Kai Ryssdal spoke with Blinder about his book. The following is an edited transcript of their conversation.

Kai Ryssdal: I have to say as somebody who believes in both of these items in your subtitle, “Why America Suffers When Economics and Politics Collide,” actually all three items — economics, politics and America — it’s a bit distressing, as is this book.

Alan Blinder: It is a bit distressing, and, you know, economists could lean a little bit more political, by which I mean not partisan but savvy. And politicians could pay a little bit more attention to facts and logic and basic economics. You know, it doesn’t quite have to be a meeting of the minds, but a little better communication about what’s good economics without any illusions on the economists side that the politicians are always going to choose the correct economic answer. But we’re kind of politically naive, and you need to understand the constraints under which the politicians operate.

Ryssdal: So, you know, what’s interesting about that, saying that economists are politically naive, you’re a guy who, just to get this out there, right, and you say in the book you’re a Democrat, you served in Bill Clinton’s National Economic Council. But you do start this book, or early on in the book is a scene with you and then I guess he was president-elect at that point, you go down to Little Rock, and you have your first sort of interaction with that mechanism.

Blinder: I have the phrase in there jokingly, “It’s a new world, Tevye.” It wasn’t a world I was accustomed to then. I was a young man then, it was a long time ago, but it operates under strange rules, strange to an academic and a very different sort of logic which I call in the book “political logic” to distinguish it from say Aristotelian logic — the kind of things we teach in universities.

Ryssdal: Explain that a little bit, would you?

Blinder: One example is what you were just alluding to before: Politicians get elected, except for the president, politicians get elected by somewhat narrow constituencies, and even the president is catering to a variety of interest groups. That can lead them, for example, to favor policies that shower large benefits on a tiny but politically active minority even though it’s at the cost of a huge number — tens of millions, maybe even hundreds, of people. Take the TPP — the TPP would have given tiny, tiny benefits to millions and tens and tens of millions of Americans, but it would have exacted costs, sizable costs, on a small number. The large number says nothing to their politicians. I mean, who is going to be activated politically by a few dollars? The steel tariffs, another great example, is in front of us right now.

Ryssdal: Go ahead, tell me more, because it is in front of me, it’s been in the news.

Blinder: There are a small number of steel companies and a relatively small number of steel workers. They are not wrong to favor these tariffs. They’re not foolish. But if you stack that up against the vast number of businesses and consumers, each of whom will lose a tiny little bit, the sum total, if you add it all up, is extremely skewed as it’s been in the media recently towards the anti-tariff position, but by political weighting, the skewness, if anything, goes the other way around.

Ryssdal: OK, but here comes the pushback then, because you get economists involved in this and they say, “Look, this is about market efficiency, and this is about the long run, and this is about, you know, transition costs. And of course this happens, and we’ll be better off in the end.” And politicians are like, “Are you out of your mind?”

Blinder: Yeah, and I think we are out of our mind when we make the arguments only on those grounds. Again, not that we’re wrong. You need to understand the political backdrop. In politics, efficiency doesn’t matter so much but fairness matters hugely, so we can make some of those arguments on fairness grounds more than we do. Secondly, I think you started about in the long run — this is one of my pet peeves. You know, the long run for economists could be measured in decades. Go try to tell that to a politician who is standing for election in six months or even two years. And then you mention Kai, the last, my real pet peeve for my fellow economists. I’m on a one-man campaign to get the term “transition cost” banned.

Ryssdal: How’s it going for you?

Blinder: Well, I have some hopes for this book, we’ll see. But not so well, so far. I mean, if you take the case, let’s go back to steel — a 55-year-old steel worker who loses his job in a steel mill. He will never get a job in a steel mill again. He probably won’t get as good-paying a job as the one he lost. And if we keep wailing, “these are only transition costs,” they’re going to think we’re crazy.

Ryssdal: And they’re going to stop listening to you, right? You’ll get shut out of debate.

Blinder: Yeah, completely. They already are.

Ryssdal: So this is a little bit of a downer to end on, but I guess I began on a downer, too. It sort of seems like economists and politicians in varying degrees are failing the country.

Blinder: Well, I think they are. And that’s indeed the motive for writing the book. I do end the book, Kai, on a somewhat optimistic note.

Ryssdal: Yes sir, you do.

Blinder: Not to be a Pollyanna, but make a few suggestions for, I call them palliatives. We’re not going to cure this problem. This is a problem that you try to manage rather than cure it. I think there’s room for improvement.

Click here to read an excerpt of Blinder’s book “Advice and Dissent: Why America Suffers When Politics and Economics Collide.”