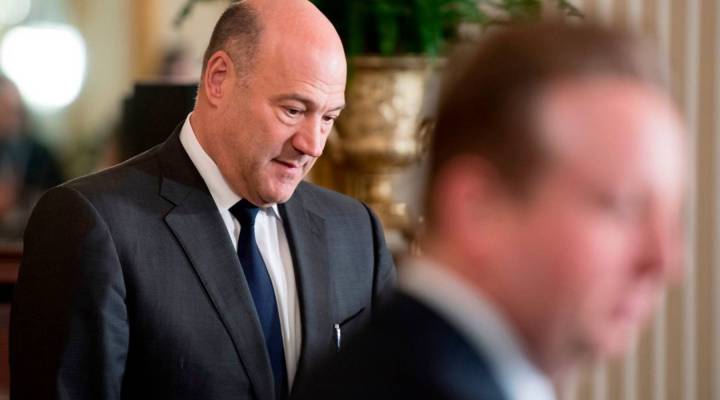 The president’s top economic adviser, Gary Cohn, resigned yesterday. He spent just over a year at the White House.

Cohn, a former executive at Goldman Sachs, was a key figure in the administration’s crowning achievement, the new tax law. He has also pushed for a roll back of regulations put on banks following the financial crisis.

Cohn is also a big supporter of free trade. That put him at odds with other members of the Trump administration – particularly Peter Navarro, who directs the White House National Trade Council.

It seems Cohn lost that fight. Last week, the president announced that his administration would impose tariffs on imports of aluminum and steel.

This time around, “it’ll be interesting to see if the president looks for a more harmonious team or continues to like to clash,” Holtz-Eakin said.

Holtz-Eakin said that there are “interesting parallels” between Trump’s push for tariffs and George W. Bush’s decision to place tariffs on imported steel back in 2002. But while many of Bush’s economic advisers also strongly objected to tariffs at the time, “we didn’t see the same kinds of resignations because there was a belief that the process had been fair, that the economic team had been able to say its piece and ultimately was unable to convince the president,” said Holtz-Eakin.

“But I don’t think [Cohn] feels the process was fair and I think that’s the big difference,” Holtz-Eakin added.

So far this morning, markets are not reacting particularly well to the news of Cohn’s resignation.

The Dow opened down by 126 points.  The S&P was down 18 points. The NASDAQ was down 60 points. Hong Kong’s Hang Seng Index closed down nearly 314 points, more than one percent.

Cohn’s departure is concerning to the business community, said Susan Schmidt, senior vice president and portfolio manager at Westwood Holdings Group in Dallas. “We’re going to see that reflected in the markets because he was a voice of experience and reason,” Schmidt said. “Not in favor of the tariffs, clearly more appreciative of the benefits of free trade, than seemingly what we’re hearing from the rhetoric coming out of the administration right now.”

Schmidt worries the tariffs could spark a trade war, with our trading partners slapping tariffs on other products in response. “Not necessarily steel and aluminum, but other areas that are big exports for us,” she said. “Things like agriculture, meat, oil, consumer products, technology, aerospace — those are areas that can be punished via retaliation.”

A centerpiece of the GOP’s big tax bill, which passed last year, was the corporate tax cut, reducing the rate from 35 percent to 21. Some argued it would make the U.S. a much more attractive place to do business, but tariffs might undermine that exact benefit.

“We are, in effect, working against that by going back and artificially imposing these tariffs,” Schmidt said. “The market would prefer us to pursue a more natural path to see how this settles out.”

Janet Nguyen contributed to this report.

Click the above audio player to hear the full interview with Douglas Holtz-Eakin.