“Imagine the most disgusting smell you’ve ever smelled in your life,” said Eric Westcott, the manager of Central Rental & Supply, a construction equipment company in Russellville, Arkansas, that’s about three miles from a meat-rendering plant that turns animal carcasses into animal feed.

Westcott says in the summer, the smell of decaying flesh wafts into the workshop and gives his workers headaches. So they close their shop door, which makes it really hot. Westcott, who is on the city council, and the mayor, Randall Horton, helped pass an odor ordinance in 2015 to combat the smell.

“If you open a very fresh bag of pet food and stick your face really close to the opening, that very heavy smell, take that times 50 and imagine what it would be like warm,” Horton said.

Russellville is a city with a population of more than 29,000 people in the central part of the state. It was built up around railroads and coal. The plant has been in the city for decades, and Premium Protein Products bought it over two years ago. In 2017, it upgraded its equipment to fight the odors, and the mayor said that has helped.

But the company also sued until the city dropped an odor ordinance that would have imposed fees of up to $2,000 for a single violation or $500 a day for ongoing bad smells.

“Of the many provisions that we have, there are two general references to odor, but there are no specific requirements as to how to control that,” said Stuart Spencer, who works for the Arkansas Department of Environmental Quality. He said the plant’s emissions are safe, and as for its smell, that’s hard to measure.

“So when we have an inspector go out to a facility based on a call that something at that site is causing odor, the odor may have dissipated by the time inspector shows up,” Spencer said.

Premium Protein Products owner David Purtle said in a brief phone interview there are a lot of bad odors in town, including the city’s sewage, and he believes the company is being blamed for them.

According to Danielle Diamond, executive director of the Oregon-based Socially Responsible Agriculture Project, nationwide, smells are sometimes regulated by nuisance laws or not at all.

“There’s no uniform federal standards,” she said. “For the most part, there really isn’t any kind of consistent way that states have ever regulated odor.” She said that’s partly a result of the lobbying power of big agricultural interests.

Jessica Meisinger represents some of those interests as a spokeswoman for the National Renderers Association. She said meat rendering plants are often blamed for smells that come from other sources. And, she points out, the industry helps make sure that slaughtered animal parts don’t go to waste.

“We do have to understand that if we want products to be made in our country, that sometimes we’re going to have to put up with things like odors while we get to a point where we can reduce them,” she said.

In Russellville, Horton said smells from the rendering plant make it harder to entice new business investors to the community when they come to visit.

“Suddenly they’ll say, ‘What’s that smell?’ and then you never hear from them again.” 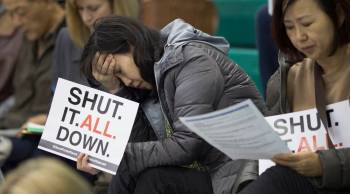