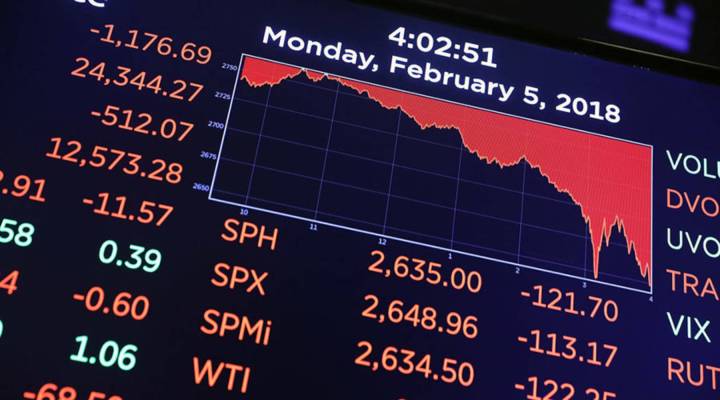 COPY
A trading board on the floor of the New York Stock Exchange shows today's closing numbers. Spencer Platt/Getty Images

The Dow Jones industrial average was down 4.6 percent today and had its largest same-day drop, in terms of points, in history. At one point, it was down nearly 1,600 points. That might give you a knot in the pit of your stomach since we aren’t used to seeing moves like that. So what does it mean? Marketplace host Amy Scott asks correspondent Sabri Ben-Achor to break it down.

Chris Low, he’s head of FTN Financial, told us what he was seeing off the trading floor earlier this afternoon:

That’s remarkable – the largest intraday drop in the Dow ever. We’ve recovered some of that loss but still down — any word on why this is happening?

So why is this happening? To be perfectly honest, a lot of the analysts I talked to … don’t know. On the surface, there is no crisis, no shattering economic data, no change in forecasts to explain this. A couple people I talked to did offer up one possibility though. Here’s John Lonski is with Moody’s Analytics:

There is one possibility that it was basically algorithms at work. Equity buy and sell programs that sensed this was a good time to take profits and get out of the market.

So basically a whole lot of trading robots happened to decide that this was a good time to get out of the market. And honestly that makes sense, because if you’re an investor, or even just have been paying attention to the the stock market over the past year, you’ve probably asked yourself in casual conversation, “Gee, how long can this go on? When should I get out?” Well, all the robots may have decided that the answer to that question was just after 3 p.m. Eastern today.

Now markets have been headed down for several days since last week. Is this connected to that?

This shattering fall we had this afternoon, from which there has been some mild recovery, that is distinct, I think, from the general drops we’ve seen in the past week or so. The background to all of this is that stocks markets are worried about inflation. We got strong wage growth numbers last weeks, suggesting inflation. They are worried about bond yields. We saw bond yields rise very steeply last week. Stocks don’t look as bright when bonds are shining. This is all in line with general dropping in the stock market, and people have been waiting for a correction, but corrections typically take a month to work themselves out, this took like 10 minutes. So today I think was something different.

How widely felt will this be, and how serious is it?

Well, we have had a lot of money pour into the market in the past couple months — $102 billion went into the market in January. So there was clearly a lot of optimism running up toward the end of the year. I think that optimism is being replaced by caution. That said, I do think the thing to remember, which everyone I’ve spoken to has said, is that earnings, economic indicators, all the fundamentals of the economy — those are still strong. There’s no rotting wood that’s just been detected that explains today’s losses. It’s certainly shocking, but so far I haven’t seen anyone suggest people should be heading for the doors and selling off all their stocks.