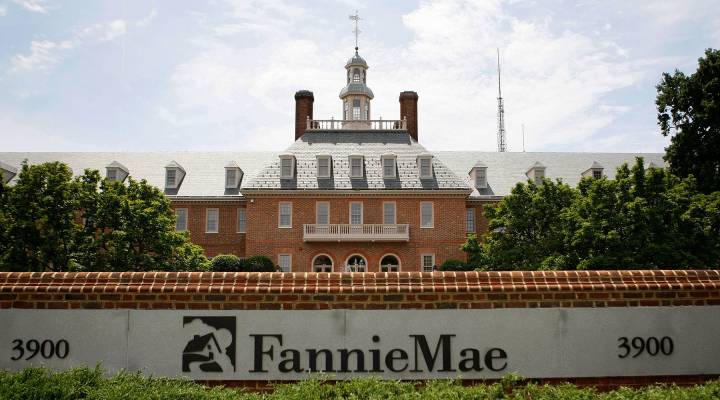 Fannie Mae, or the Federal National Mortgage Association, was founded during the Great Depression and plays a significant role in the home mortgage industry. But during the financial crisis, both Fannie Mae and its cousin, Freddie Mac, got into some trouble. In September 2008, Fannie Mae was taken under government conservatorship, which it remains in today.

Tim Mayopoulos started working at Fannie Mae not long after following a career on Wall Street. He became CEO in 2012. He talked to host Kai Ryssdal about his memories from the financial crisis, how it changed Fannie Mae and the state of the American housing industry. What follows is an edited transcript of their conversation.

Kai Ryssdal: For those who aren’t entirely familiar with what this place does, give me the 30 second, “this is what we do.”

Timothy Mayopoulos: So here at Fannie Mae, we’re in the mortgage business; but we don’t make mortgages to consumers, to borrowers. What we do is we buy mortgages from folks who originate mortgages, whether it’s a credit union or a bank or an independent mortgage bank, which gives them more money to go out and make more loans, and we take the mortgages that we buy and we put them into mortgage-backed securities, and we guarantee the purchasers of those securities that we’ll cover all the principal and interest payments in the event that the borrower doesn’t make them. So what does all that do? What that does is it enables us to attract global capital to the U.S. housing markets at very efficient rates.

Mayopoulos: We are really a fundamental backbone of the U.S. housing industry. If you think about it, we finance roughly 30 percent of all the mortgages in the United States. We have a $3 trillion balance sheet. So if you drive down the typical street of, you know, regular neighborhood in the United States and you look at the houses on it, roughly one in three of them is going to be financed with a Fannie Mae mortgage.

Ryssdal: Which is part of the how we got to — and I don’t want to go back too far into the crisis, because there’s lots talk about what you’re doing now, but that’s how we got to Sept. the 5th of 2008, where the government says, “Listen, you’re ours,” basically, and you enter into conservatorship. After having been known as Government Sponsored Entities, right, and backstopped by the full faith and credit of the government, I guess the question is: Should the American government be in the business of guaranteeing mortgages?

Mayopoulos: It’s a fair question that people ought to ask. Well, you don’t have to have a housing finance system where the government implicitly or explicitly backs a big part of the market. We don’t have to have that. But what people don’t remember is that Fannie Mae came out of the Great Depression. Because the way people financed homes in those days is they got a three- or five-year bullet loan, and then they had to roll it over with a new loan from a new institution. And at the end of those three or five years, they couldn’t find another institution to give them a new mortgage. So they lost their house to foreclosure. FDR recognized that, and the government decided we’re going to make sure that we have liquid markets, that we’re going to have credit available in all markets, at all times, all across our country and that people will be able to finance that with a very long-term instrument.

Ryssdal: OK. But the Depression was a very long time ago. The American financial system is much more sophisticated now, much more liquid now. Do you doubt that private investment would come were you to be dissolved as some lawmakers and many policymakers say, “Listen, let’s get rid of these two”?

Mayopoulos: Look, I have no doubt that private capital ought to play the primary role of backing the housing finance system —

Ryssdal: Say that again. Here’s a guy who runs Fannie Mae saying private capital ought to be doing it.

Mayopoulos: Private capital ought to be the primary source of funding for the housing markets in the United States. And in fact, the innovations that we’ve been a big part of since conservatorship was imposed nine years ago have contributed to that. So if you think historically, Fannie Mae has this enormous balance sheet, we’re making all these loans, we have 18 million mortgage loans on our balance sheet. Historically, we would have held all of that credit risk for the life of those assets. Today we don’t do that. We now transfer a very significant part of that credit risk to private capital. In other words, we’re essentially getting reinsurance on what we have. So people have the impression that Fannie and Freddie are continuing to take all this risk. We still take some risk, but we are transferring a very very big part of that risk to private capital.

Ryssdal: You were on Wall Street for a long time, so what do your friends at Bank of America or JPMorgan or wherever, what are they saying when you guys go to whatever meetings you go to and this comes up, and you say, “You know what? You guys ought to be doing this. You ought to be on the hook”?

Mayopoulos: You know, I think there is private capital out there that will take that risk if properly compensated for it. At least it will do that in most markets at most times. One of the things people need to understand is that the capital markets work until they don’t work. There are moments when they just seize up. And that’s why an institution like Fannie Mae exists, so that when your local bank won’t make you a mortgage loan that we’re out there to say no we’ll actually provide liquidity to this market.

Ryssdal: Give me your sense of basically the state of the American housing industry. I mean, are we stable, are we better off than we were nine years ago?

Mayopoulos: Oh, we’re clearly better off than we were nine years ago. I mean, the country was really in a great crisis, and we certainly at Fannie Mae understand that the reason the government invested a lot of money in Fannie Mae was not because it particularly wanted to do that. That wasn’t an investment decision the taxpayers made and said we really want to be invested in Fannie Mae. But they understood the critical importance of this institution to the operation of the housing finance system.

Ryssdal: We should say here the government, taxpayers, have been paid back.

Ryssdal: Do you ever go to your regulators and say, “Listen, can we lose this conservatorship thing?” Or is that just a nonstarter?

Mayopoulos: No. Look, I’d say our regulator has been on record clearly and consistently saying that conservatorship is not a sustainable state and that ultimately you need to bring private capital back to this market in bigger scale and that you need to be able to release these institutions or create some other institutions to operate the system without this kind of government oversight.

Ryssdal: I want to make sure I understand, it sounds like you’re amenable to, if not Fannie Mae going away entirely, but then certainly pulling back from where you are in this in this mortgage business.

Mayopoulos: I’m — we’re certainly open to that. We’re not wedded to an old system. We’re actually committed to making a better housing finance system. I’m probably one of the very few CEOs who stood up in front of his entire company and said, “You know what, we have to recognize the fact that the legal entity that we work for, Fannie Mae, may cease to exist at some point.” Not many CEOs stand up and say that. But I’ve stood up more than once and said that and said, “But that’s not what your focus should be. Your focus should be on being here and being part of creating a housing finance system that will support the needs of this country for the next 20 or 30 years.” A lot of people are focused on what happened 10 years ago, and what we really need to be focused on as a country is what do we want the housing finance system 10 years from now or 20 years from now to look like?

Corner OfficeDivided Decade
Tags in this Story
Share this Story