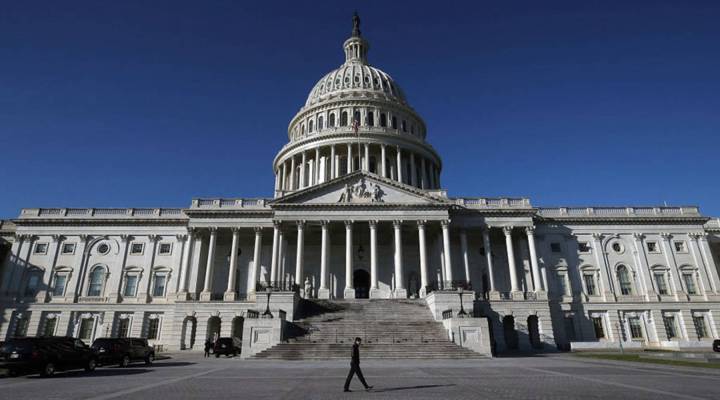 COPY
The House of Representatives has been holding virtual hearings during the pandemic, but lawmakers have been required to vote in person or have another member of Congress cast a proxy vote on their behalf. Mark Wilson/Getty Images

The House of Representatives has been holding virtual hearings during the pandemic, but lawmakers have been required to vote in person or have another member of Congress cast a proxy vote on their behalf. Mark Wilson/Getty Images
Listen Now

There is currently no plan to fund the federal government beyond tomorrow. Lawmakers have yet to agree on a continuing resolution to fund the government. The deadline to do so is this Friday at midnight. To get a sense of how budget negotiations used to go — and whether we can expect the current state of affairs to be the new normal — Marketplace host Kai Ryssdal spoke with Stan Collender, professor of public policy at Georgetown. The following is an edited transcript of their conversation.

Kai Ryssdal: So test my premise, is this any way to run an economy like this?

Ryssdal: I remember back in the day, President Reagan standing at the podium saying “I am not going to sign another continuing resolution.” So this has been going on for a while — the fact that the government does short-term funding. It does seem though, that it’s happening with increasing regularity and ill feelings.

Collender: Well two things. First of all, you’re exactly right. That is, it’s happening more and more frequently and become standard operating procedure as if it’s acceptable, and that’s because the average person doesn’t really care whether the government is operating under a continuing resolution or or real appropriation bill. But I want you to keep this in mind, how long this has been going on. The Congressional Budget Act of 1974 was passed in part to prevent continuing resolutions.

Ryssdal: [laughs] So how come we still have them?

Collender: Well we’re in a different world now than we were 40-some-odd years ago. Hyper partisanship. You know nobody wants to make a difficult decision. It’s a damned if you do, damned if you don’t, situation, and on top of everything else in Washington these days compromise is considered a four letter word. It’s the equivalent of collaborating with the enemy.

Ryssdal: Let me back you up for a minute to something you said, that the average person in this economy doesn’t care how Congress is running or sometimes even whether the government is running. What what are the ramifications though? I mean other than Yosemite National Park being closed when you know you want to go on vacation, what’s the real life impact of this?

Collender: Well, I mean first of all you’re exactly right. The most immediate impact usually is on national parks because grass isn’t allowed to grow when the government is closed. But for the average person they won’t immediately notice, unless you work for the government and they’re told not to go to work and you’re not going to get paid. It’ll take a couple of weeks before it starts to have an impact. And at that point, government contractors won’t get paid, their invoices won’t get processed. And in places where there’s a big concentration of federal employees, the effect will be immediate. People who tried to sell them cars will find that federal employees or their families don’t want to buy these things because they don’t know when they’re going to get paid next. So it takes about two weeks.

Ryssdal: Riddle me this: you’ve been around Washington for a long time, people tell you things. Do you see this cycle changing somehow as it gets worse and worse, which I know is an oxymoronic question.

Collender: Yeah, well, I wish I could tell you that I had a lot of hope this was going to get better, but there’s nothing on the horizon that shows that this hyper partisanship is going to get is going to change anytime soon. And even if there’s a Democratic wave, it’s likely to produce narrow Democratic majorities and unless there’s a crisis this is just going to stay the same way: that is you and I are going to be talking about continuing resolutions and government shutdowns for months to come this year and probably for years to come in the future.