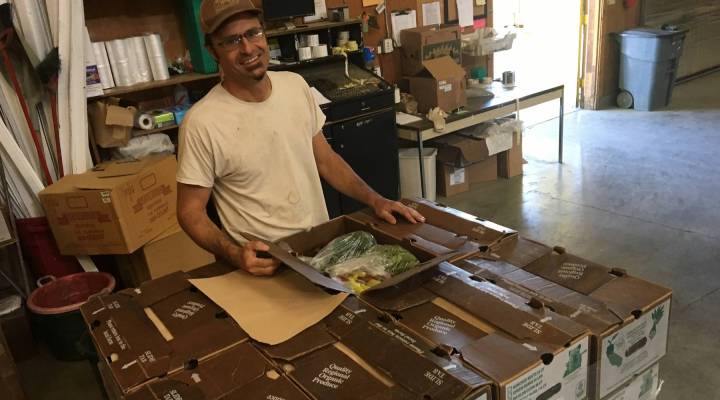 COPY
Paul Underhill is selling more to restaurants and grocery stores to compensate for lost revenue from CSA boxes. Sam Harnett/ for Marketplace

If your New Year’s resolution is to cook more, you might be tempted to order a meal kit from a company like HelloFresh, Sun Basket, or Blue Apron. These companies prepare and package up ingredients, along with a recipe and send them right to customers’ doorsteps.

For years, some small farmers have been doing something similar —  CSA or community-supported agriculture. Now, some of those farmers say that the meal kit companies are cutting in to that market.

Paul Underhill built his Northern California farm on the CSA model. Underhill’s customers pay him to deliver a box of produce every week., which can range in price from $18 to $38, depending on the size. There are no middlemen — the money goes straight to him.

“It was basically like the 20th century farming equivalent of a funding website,” Underhill said, “GoFundMe or something.”

The community agricultural model came to the U.S. in the 1980s. It helped some small farmers survive as big industrial farms pushed down produce prices. Underhill and other farmers in the region said their CSA businesses grew steadily until the recession hit.

Underhill attributed some of the decline to meal kits. He said farmers like him developed the whole straight-from-the-farm concept. He said that model is now being undercut by meal kit companies like Blue Apron. Underhill said he can’t afford to advertise like big companies backed by venture capital.

In one of Blue Apron’s TV ads, the voiceover narration says, “We’re building a better food system where instead of paying for middlemen, we work directly with family farms.” Blue Apron declined to comment for this story. It had a rough year, losing some customers in a market that is becoming increasingly competitive.

The meal kit company Sun Basket wrote in a statement that “CSAs are another excellent way for savvy consumers to gain access to quality produce, and we believe there is ample room in the marketplace for both.” But that marketplace is getting crowded, said Evan Wiig, founder of the Farmers Guild, an advocacy group for local agriculture.

“The new produce box schemes, they really aren’t the death of the CSA,” Wiig said, “They’re just the newest iteration in a long-evolving trend.” Wiig said CSAs used to be one of the only ways for urbanites to get things like heirloom kohlrabi or purple carrots. Today, in addition to the meal kits, there are also more farmers markets, and organic produce is available at many grocery stores, or at Costco.

“The local food system, the local food models, have shifted so dramatically in just the past decade or two,” Wiig said.

Customers now demand more convenience and control, according to Wiig. CSAs often send produce that is in season, unlike meal kits, which can tap different farms to give customers everything needed to make a specific meal at any time of the year.

“We now live in a time when everyone can buy everything online and have everything delivered to their home,” explained Lorraine Walker, who runs Eatwell Farm, another Northern California CSA. Walker is trying to stay competitive by inviting customers to her farm to do things like pick strawberries and make pasta sauce. “That’s the one thing no one else can offer,” Walker said, “That’s the true connection to the farm, to the soil, to the plants, and to where your food comes from.”

Back at Underhill’s farm, workers are wrapping pallets of vegetables with plastic, getting them ready to ship. Underhill is now selling more produce to restaurants and grocery stores. He has resisted selling to meal kit companies because he said they would cut into his profits.

“I’m trying to think of a word other than depressing,” Underhill said, “But that’s what it is.”

Underhill said that with today’s low produce prices and slim margins, selling through a middleman is not a long-term option for him.

Blue Apron has provided financial support for Marketplace in the past. 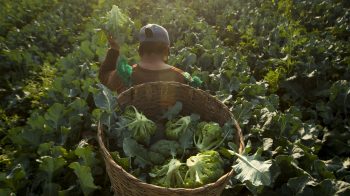