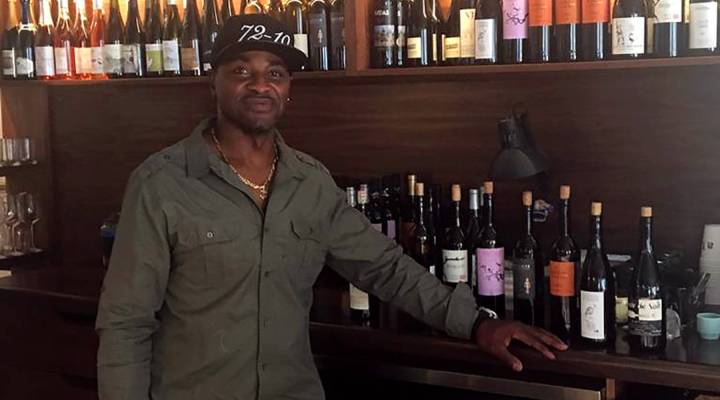 COPY
Cory Woods went through a training program to transition from the kitchen to the front of the house, where he is now earning far more money. Sam Harnett/Marketplace

Cory Woods went through a training program to transition from the kitchen to the front of the house, where he is now earning far more money. Sam Harnett/Marketplace
Listen Now

It has taken Cory Woods a while to get used to his new position as a waiter at Alta, a fine-dining restaurant in San Francisco.

“I am urban African-American,” Woods said, “I am dealing with a lot of Caucasian people with money, people who I have never been exposed to. Initially it was hard communicating with them.”

Woods started working in restaurants 30 years ago, but like many people of color in the industry, he was always in the kitchen, or back of the house. That is where all the “grunt work” is done, Woods said.

At Alta, Woods started as a dishwasher.  Last year he went through a new training program at the restaurant so that he could learn how to work in the front of the house. Now he is waiting tables, making tips, and earning significantly more money — when you factor in tips, his pay went up from $14 an hour to $25 an hour.

Alta is one of a couple of restaurants in the Bay Area that have started training programs to address what they acknowledge is a race wage gap. The initiatives come after Restaurant Opportunities Centers United, a restaurant employee advocacy group, conducted surveys of workers in over a dozen cities.

Through the surveys, ROC United found that on average, workers of color earn less in restaurants than white employees. The organization released a report detailing the race wage gap in the Bay Area.

According to ROC United, the primary reason workers of color earn less in the industry has to do with where they work in restaurants. People of color  are more often employed in the kitchen – cooking or washing dishes. Unlike servers, hosts, or bartenders, kitchen staff does not make tips and pulls down less money on average.

At a panel on the race wage gap, Saru Jayaraman, president of ROC United, said the organization found that out of the metro areas they surveyed, the Bay Area had the worst restaurant race wage gap in the country. In the Bay Area, Jayaraman said white workers in the restaurant industry, on average, make about $5.50 more than workers of color.

So far about 40 employees have gone through the training program at Alta Group’s several restaurants. “Our training programs are designed to give everyone equal opportunity,” said Gabriel Barba, who directs the effort.

Barba said it is rare for restaurants to help workers like Woods transition from the kitchen to the front of the house. Training programs cost money in an industry that has notoriously slim margins.

Woods said he never expected a fancy restaurant would invest in training him. It has taken a few months, but Woods has become comfortable with customers. He talks to them about sports and retirement plans. Customers now ask for him by name.

“I’m proud to say this day that I am considered a success story,” Woods said, “I have two vehicles. I never thought I’d be the owner of a life insurance policy.”

Woods is originally from Missouri. He said the new waiting job is the only reason he can get by in the expensive Bay Area.