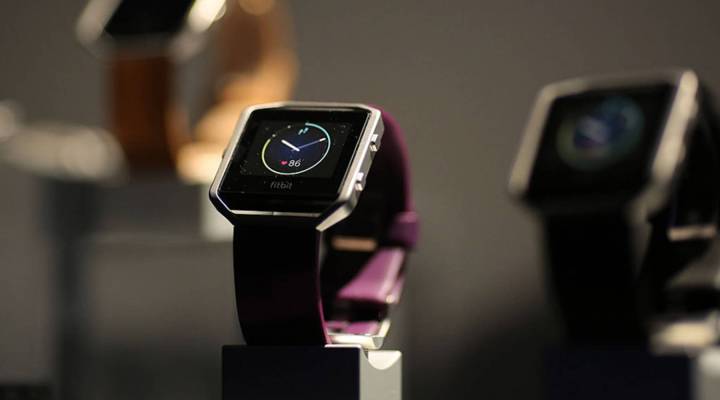 COPY
The FDA is working with companies like Fitbit to streamline the approval process for health and medical software. DAVID MCNEW/AFP/Getty Images
Marketplace Tech Blogs

The FDA is working with companies like Fitbit to streamline the approval process for health and medical software. DAVID MCNEW/AFP/Getty Images
Listen Now

For the first time, last month, the Food and Drug Administration approved an Apple Watch accessory to be used as a medical device in the United States. The device is the AliveCor KardiaBand EKG reader, which lets consumers get a heart rhythm reading from a wristband.

Expect to see more of this kind of device. Under its new commissioner, Scott Gottlieb, the FDA has been creating plans to collaborate more with tech companies that want to make medical devices. His agency is working directly with companies like Apple, Fitbit and Samsung to streamline the process for approving health and medical software.

Gottlieb is a physician, but he was also a venture capitalist before he took over the FDA in May. He spoke with Marketplace Tech host Molly Wood about his plans for the agency.

Molly Wood: How does your work as a VC inform what you’re doing at the FDA?

Scott Gottlieb: In certain ways. One of the things that I was always cognizant of, looking at very early-stage technology, are issues around the cost of development, and the biggest obstacle to making an investment decision isn’t necessarily the investment that it’s going to take to actually develop the technology itself. It’s the risk, and it’s the time cost of capital and also the uncertainty about the regulatory process or how something’s going to be received. So I think that if we’re being good stewards of the regulatory process, if there are things we can do that help reduce uncertainty, whether it’s putting out guidance documents or speaking more clearly about what the objectives are, I think it’s ultimately going to make the cost of capitalizing some of these investments lower, and ultimately it might affect the price of how these new technologies get priced once they do come to market.

Wood: Since you took office, it sounds like you have been making moves to speed things up or reduce barriers in terms of approvals for new medical technology. Is that fair to say?

Wood:  Let’s talk about data and privacy. There’s not a lot of data more sensitive than medical data, and if people are monitoring their heart rates or their glucose levels or sleep or brain activity, who owns that data?

Gottlieb: It’s a good question. So, we’ve described in a recent guidance document how medical device manufacturers can make that information available to the patients themselves. And we think patients should have access to that information.

Wood: Although, with all due respect, access to information is not the same as ownership, and I could also see a scenario where I might want to retract or have a right to disappear some of my information if it could affect my insurance policy, for example.

Gottlieb: Right, and that’s why you always want to pursue a goal also where consumers control their information. And to the extent that we touch certain aspects of that, as a general principle, as a goal, we have expressed an interest in trying to facilitate those outcomes.

Wood: What is the FDA’s role in testing for accuracy? The FDA is not a testing agency; it’s a review agency. So to what extent do you have a responsibility to follow up on the devices or technologies that may get approval?

Gottlieb: Well, we have a lot of ability to look at the post-market safety and efficacy for technologies that come to the market. I think we have a lot of opportunity to move away from the passive system of gathering information about the safety products and towards a more active surveillance system. Maybe not move away from the passive system, but what we also want is, with the advent of more seamless and autonomous data collection tools like electronic health records, we want to have the capacity to be gathering and mining that information on almost a real time basis, where we can be looking for trends in the market to help alert us to certain safety issues early in the life cycle of a product.