COPY
The early morning sun rises behind the US Capitol Building on October 22, 2009 in Washington, DC.  Mark Wilson/Getty Images

The early morning sun rises behind the US Capitol Building on October 22, 2009 in Washington, DC.  Mark Wilson/Getty Images
Listen Now

In the past few weeks, taxes have been on our minds and at the center of the news, as the House and Senate passed their versions of the Republican tax bill.

Tax reform touches virtually everyone living in the U.S. and plays a part in shaping the economy. But it’s confusing.

This week, listeners asked some of their most pressing questions on tax reform and the plans that the House and Senate must now reconcile if Congress is going to pass major tax reform this year. Marketplace Weekend put together a panel of experts to answer those questions: Mark Nash, tax partner at PricewaterhouseCoopers, Michael Simkovic, professor of law and accounting at the University of Southern California’s Gould School of Law and Jill Schlesinger, certified financial planner, CBS business analyst and host of “Jill on Money.”

How does the tax bill effect small business landlords?

This is Doug Culver in Las Vegas. I have a couple of small fourplex apartment buildings, and I’m wondering how the tax bill affects that small business. For instance, mortgage interest on the building — will that still be deductible? And how about property taxes on the buildings — will they still be deductible? And does it make sense to set myself up as a pass-through entity?

Michael Simkovic: All right, so there’s some good news for Doug. Mortgage interest is going to continue to be deductible. There is a limitation on business interest, but it only applies for businesses that have between more than $25 million or more than $15 million, $25 million is the House version and $15 million is the Senate version in adjusted income. So if he’s only has a few small fourplexes, he probably would fall beneath that threshold and would not have his ability to deduct business interest be limited. There’s also a cap on the property tax deduction, but that only applies to individual homeowners, not to people who own a property and rent it out as a business. So he would also get to keep the property tax deduction there. As far as setting himself up as a pass-through business, he might want to do that. There’s a cap on the pass-through tax rate, which could be attractive, but then again, corporate tax rates are also going down dramatically. So it’s not clear as a general rule that he would necessarily be be better off with one than the other, and he might want to consult an adviser about that.

Has the health insurance mandate been removed?

From listener Rebecca Mettler: Has the health insurance individual mandate been removed? Basically, can I stop paying $1,400 a month for health insurance? And a follow on question: Would it be wise to fully fund my [health savings account] before Dec. 31, 2017, and perhaps let go of the super-expensive health insurance? Would the HSA funding in 2017 be a tax deduction?

Jill Schlesinger: So here’s the deal. The good news and bad news is: maybe. The Senate bill actually will repeal the individual mandate. The House bill kept it. I think it’s going to hew towards the Senate version, but who knows. But again, we don’t know, but if the Senate bill were to be repealed, then, you know, I feel like I have to be like your Jewish mother and say, “Do you really need to not have insurance?” Not having health insurance is a huge risk in your financial life. That said, regarding the follow on question: Yeah, I think it would be great to fund an HSA for lots of different other reasons. The HSA, the health savings account, remains a tax preference and really good way to save for unreimbursed medical and health expenses. But, you know, usually it’s paired with a high deductible health insurance plan. So, No. 1 on the list would be gosh, I really want you to have health insurance, so please do that. The follow up question: If you’re not going to do that, maybe yes, fund the HSA, and yes, the HSA should remain a tax preference item.

From listener Ken Merrell: Very proud of my son who submitted his Ph.D. application yesterday. He’ll get a $35K stipend and get taxed on $85K under the new tax plan. How do we reconcile that with a professed ideal that the tax plan is about growth, opportunity and competitiveness?

Simkovic: I’d say it’s very problematic. Both the House and the Senate version include a number of provisions which specifically target college and graduate students and also universities and colleges generally. The particular provision that the question is about is only in the House version, it’s not the Senate version, but graduate students would be taxed on the value of the tuition that they do not have to pay. There are many studies by economists which have found that investment in higher education is very important to economic growth. It’s very important to innovation. It’s important to boosting wages and boosting employment, and the rate of return on that is typically, for higher education, somewhere in the 10 to 20 percent range, which is actually higher than the stock market. It’s higher than private investment, which tells me that we’re underinvesting in education and should be putting more money into that if we want it to maximize economic growth. So I think that that’s an aspect of the bill which would tend to undermine economic growth.

How will the tax plan effect freelancers that reimburse their expenses?

From listener Amy Griffin: A lot of artists/freelancers are freaking out because word is going around that the tax plan ends unreimbursed employee expenses. I assume this is like union dues that your employer doesn’t cover. What does it do to Schedule C expenses though?

Mark Nash: So it is true that both bills would repeal the deduction for unreimbursed employee expenses. So, those things that you pay out of your own pocket as an employee of another employer and try to deduct those on your taxes. They, right now, are miscellaneous itemized deductions, and those are going to be curbed under the tax reform proposals. However, for a Schedule C, which is what most people would be if they are a freelancer or are self-employed, those deductions would be deductible on a Schedule C, and those deductions will remain deductible or those expenses will remain deductible for self-employed individuals. So, not as big of a hit for those people that are deducting them related to the trade or business that they are carrying on, less so for those who are trying to deduct them if you’re an employee of another.

What changes are there — if any — to capital tax gains?

Nash: Well, there were a number of changes to tax rates in general, but no proposed change to the capital gain rates. So, they will remain subject to a maximum tax rate of 20 percent for individuals. Plus, the 3.8 percent net investment income tax or Obamacare tax as it’s sometimes referred to, so a top rate of 23.8 percent on capital gains remains in effect. That’s the same this year. And it’s not proposed to change under either of the two bills.

What deductions are small business owners gaining and losing under the proposed plans?

Schlesinger: Well, here is the problem. There is a lot of consternation around this thing called pass-through entities, right? So, if you’re a sole proprietor, you’ve got a partnership, a limited liability company, an S Corp, what you do right now is you pay tax on your net income and you do it at your ordinary income tax rate. Right, so it’s just pretty easy and it is what it sounds like. The income that passes through the organization comes to you and then you pay the tax. So, here’s the weird part. The House bill has this wacko formula which is so nutty: 30 percent of your net income would be called business income — it’s subject to a maximum tax rate of 25 percent — and the balance is subject to whatever your personal income tax rate is. So, the Senate bill does it slightly differently. They look at your pass-through rate and they say, okay, we’re going to give you a 23 percent deduction on your pass-through income. However, there’s a huge caveat, it really excludes most professional services firms, like you’re a lawyer, you’re a doctor, you’re an architect. The outcome for self-employed people is yet to be resolved. It’s incredibly complicated and I think what’s likely to really happen is if you are a high earner and you are self-employed you better get yourself a fabulous CPA, and now I toss it to Mark, is that right?

Nash: I totally agree. It’s certainly not going to be simplification for the self-employed individual that has to do these things. Great simplification provisions for those who will be filing and taking the standard deduction. But for those who are having to deal with all these calculations that Jill was just talking about, very complicated, and you need somebody that understands these rules.

What’s one piece of advice you should absolutely think about when considering the tax changes for yourself?

Simkovic: If your goal is to try to figure out how this is going to affect you personally and what you should do, I would wait to see how it all ends up coming out because the bill is changing very quickly. There are differences between the House and the Senate version. You’ll do kind of a lot of work chasing your tail following all of the changes and trying to guess how it comes out.

Schlesinger: I’ll jump in here. Be patient. No sudden moves. Objects may have shifted during flight. You may have to do something in the week between Christmas and New Year’s, you will have some time to make decisions. But no sudden moves until we have an actual reconciled bill.

Nash: Yeah I think that that is certainly true. Prepare to move but not necessarily make any moves to the extent that you can be doing that.

Bring us your tax stories by emailing us at weekend@marketplace.org (you can send your voice memo messages here, too). You can also leave a comment on Facebook or Twitter, call the Weekend voicemail 1-800-648-5114 or send your comments and questions using the form below.

What do you want to know about the tax plans? 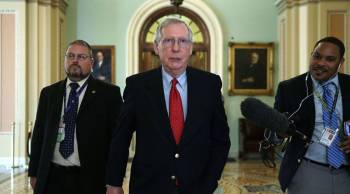