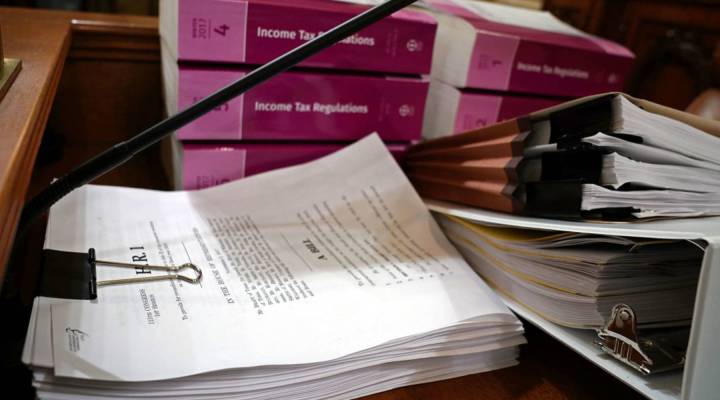 At the heart of the GOP tax plan is a proposal to cut taxes on corporations. Republicans argue that would help the economy; they say companies would take the money they save and use it to grow — to make acquisitions, buy equipment, and hire people.

But Robert H. Frank, who teaches economics at Cornell University, said there’s nothing stopping companies from doing those things now.

“Interest rates are very low. Firms are sitting on a lot of cash. If they have a profitable investment opportunity, they can undertake it right now, immediately, without any tax cut,” Frank said.

Frank said corporations are more likely to use potential tax savings for a different purpose: shareholder payouts. That’s what happened last time companies got a big tax break in 2004. And since then, shareholders have been pressuring companies for higher dividends, said Eric Ervin, who heads the investment firm Reality Shares.

“The shareholders have really demanded this, where they say, ‘As earnings are growing for this business, we want those earnings to be paid back to us in the form of dividends,'” Ervin said.

If companies use their tax savings to pay higher dividends to shareholders, that could, in its own way, drive economic growth.

“Some of that money is going to be invested in other companies. Some of it’s going to be consumed today. So all of that is stimulating for the economy,” said Kent Smetters, who teaches economics at the Wharton School and heads the Penn Wharton Budget Model.

But Professor Frank from Cornell offers a caveat about shareholders: They tend to be people at the top of the income ladder.

And, thing is, “the propensity to spend out of extra income on the part of the rich is very low compared to everyone else,” he said. “An extra dollar won’t get spent nearly to the same extent by a wealthy family as by middle-income one.”

In other words, to help the economy, shareholders would have to spend that extra money in their pockets.