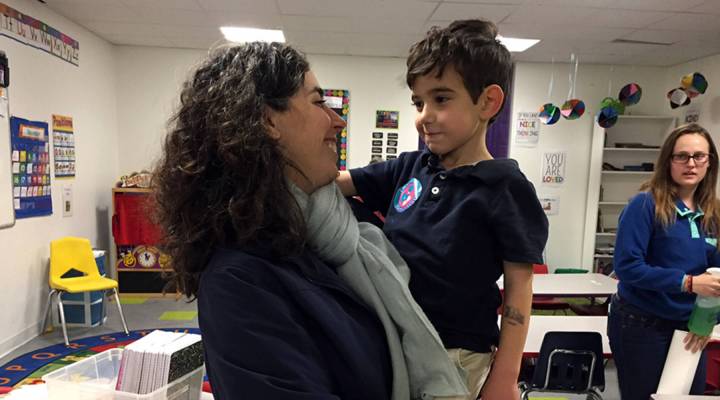 COPY
Meredith Chaiken picks up her son Ezra from an after-school program in Baltimore. Amy Scott/Marketplace

On a recent evening, Meredith Chaiken picked up her son Ezra after a day of school at Margaret Brent Elementary in Baltimore. He’s in pre-kindergarten, and Chaiken’s older son, Tavi, is in second grade. Both boys are thriving in their neighborhood public school, she said.

“I appreciate the teachers,” she said. “They’re dedicated, they’re working really hard, they’re interested in my kids, and it’s a nice community for us to join.”

But according to the popular school ratings website GreatSchools.org, Margaret Brent is rated just two out of 10 for overall quality.

“I’m not surprised,” said Chaiken, when informed of the score.

She wasn’t surprised, because most of Margaret Brent’s students come from low-income families. Chaiken, who does market research, knows there’s a high correlation between poverty and lower scores on standardized tests.

“It’s disappointing that it gets a two,” she said. “I don’t think it deserves that.”

GreatSchools’ ratings, in most states, used to be based entirely on student test scores. But this month the nonprofit group behind the site unveiled a new system. Type a school name into the search window, and you’ll see an overall one to 10 rating. It factors in things like access to advanced courses, test score improvements, and disparities between different racial and income groups.

“What we are excited about now is that we are providing a more nuanced view of school quality and how well schools are serving all of their students,” said GreatSchools’ president Matthew Nelson.

Not nuanced enough, said Jack Schneider, an education historian at College of the Holy Cross. He’s part of a consortium in Massachusetts studying better ways to measure school quality. Schneider said parents want to know if a school is safe, has an arts program or enough resources. The new overall rating still relies heavily on test scores.

“Schools are not monolithically good or bad,” he said. “They’re strong and weak in many different ways.”

A low rating, Schneider said, can steer parents away from schools — even entire communities — that may be a good fit. Several real estate websites, like Redfin and Trulia, embed GreatSchools ratings in their listings, “which really walks a thin line between providing people with information and actually steering them in ways that lead to segregation,” he said.

GreatSchools’ Matthew Nelson said parents should think of the ratings as a starting place.

“The best way that you’re going to know if a school is right for your child and for your family is if you go visit and you talk to the adults, the teachers, the administrators and other parents and students at the school,” Nelson said.

But Meredith Chaikin at Baltimore’s Margaret Brent worried parents who see that big No. 2 on the website won’t even bother. The school had the same score under the old system.

“I’m sure that some people are scared away from that score,” she said, “and I think they’re missing out on what could be a great experience for them and their kids.”

GreatSchools does allow the public to weigh in, and moderates those comments to reduce the chance that a review will be posted by someone who doesn’t have direct experience with a school. On GreatSchools, Margaret Brent gets four out of five stars.

Editor’s note (Dec. 1, 2017): This story has been updated to make clear that GreatSchools takes measures to eliminate reviews posted by people with no direct experience of those educational institutions.