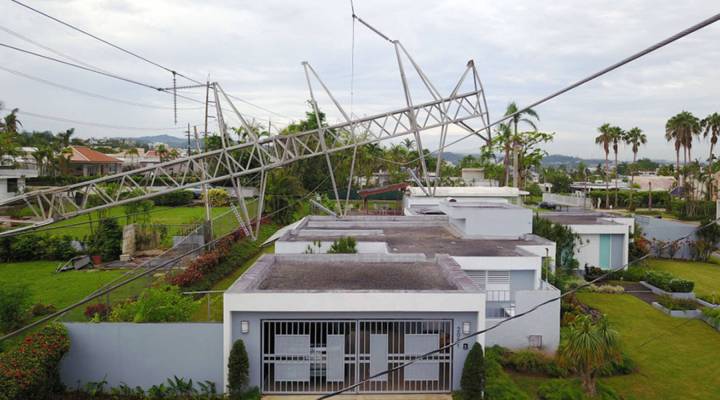 COPY
A power line tower downed by the passing of Hurricane Maria lies on top of a house in San Juan, Puerto Rico, on Nov. 7, 2017. RICARDO ARDUENGO/AFP/Getty Images

A power line tower downed by the passing of Hurricane Maria lies on top of a house in San Juan, Puerto Rico, on Nov. 7, 2017. RICARDO ARDUENGO/AFP/Getty Images
Listen Now

The latest information out of Puerto Rico indicates that less than half of the island has electrical power. That means hospitals, supermarkets and small business are still struggling to literally and figuratively keep the lights on. Marketplace Weekend host Lizzie O’Leary has been reporting from Puerto Rico. She talked with Marketplace host Kai Ryssdal about the situation on the ground. The following is an edited transcript of their conversation.

Kai Ryssdal: Do me a favor would you. You’ve been there a little while now. Look around. Tell me what you’re seeing. What’s your general sense?

Lizzie O’Leary: I think the general sense is, certainly in San Juan, how quiet it is. How many people are not here. Obviously, tourists are not here but there also just aren’t the sort of things you see in a thriving city. There are no street lights for example. People navigating traffic that way. Not a lot of kids. We went to a park. There were not little children playing there, though some of them are now back in school. We were the first customers at a bar and restaurant, and one of the employees came dancing out the door to us, and we asked them what it would take to reopen and what it has been taking. And, you know, it’s sort of creativity. They’re trying a limited menu. They’re trying new prices. They don’t really know who their customers are going to be because they’re not going to be the usual tourists. So they could be rescue workers. They could be people who are doing maintenance, but they don’t really know yet. So there is a lot of trial and error going on.

Ryssdal: I imagine you’re in a big hotel somewhere in San Juan. Who’s the clientele right? ‘Cause it’s not tourists.

Ryssdal: Right. The big story out of Puerto Rico before this storm hit obviously was the economy. This has not in any way done sort of the long term any good, has it?

O’Leary: No, it hasn’t. Look, obviously we’ve reported a lot on the debt situation, $74 billion to creditors, some $50 billion to pension holders. You know, the other thing that one of the economists who we talked to, Vicente Feliciano, was saying was they actually started to make some of the painful, but necessary, reforms to allow some debt restructuring to take place. And then Maria came along, and he had a pretty colorful analogy for it. I’m gonna let you hear that:

“Puerto Rico was like a sick person who had just gone to the operating room and the outlook was actually positive. Regrettably, once we start on that track Maria comes around.”

O’Leary: Maria, he said, could be the last straw for people who were debating whether or not to leave the island. And I would kind of have you focus on two P’s—power and people. Power is obviously necessary for rebuilding to take place. And then the people question: Young people, are they going to stay? Are they going to go? You know, young people in this economist’s family were actually leaving. And he said, “Look, by the time the lights come back on, there may not be people here to see it.”

O’Leary: There’s some stuff that’s really hard to get, like ice. When we went to that burger joint they were talking about how difficult it is to get ice. And then, the other thing is trash. There is so much debris. You see trees and vines and leaves and household stuff — mattresses everywhere. We followed some people dumping out their trash. We followed some of the dump trucks, and we actually went to the big landfill, and there is so much of it, Kai, that I mean that’s something we’re going to dig into in future reporting, just trying to figure out where all of this trash is going to go and if there’s room for it.