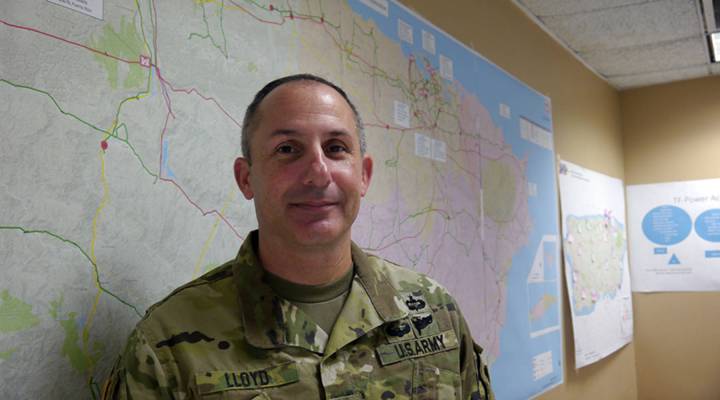 COPY
Col. John Lloyd, who leads the U.S. Army Corps of Engineers mission to restore power to Puerto Rico, stands in front of the strategy map highlighting key transmission lines. "It just is one of the most challenging missions that we've really faced,” he told us. Joanne Griffith/Marketplace
Economics of Disaster

Col. John Lloyd, who leads the U.S. Army Corps of Engineers mission to restore power to Puerto Rico, stands in front of the strategy map highlighting key transmission lines. "It just is one of the most challenging missions that we've really faced,” he told us. Joanne Griffith/Marketplace
Listen Now

Almost three months have passed since Hurricane Maria made landfall, and much of the island of Puerto Rico is still without power. Roadside debris, downed trees and fallen power lines mark the damage Puerto Ricans live with on a daily basis.

The U.S. Army Corps of Engineers is handling approximately 60 percent of power restoration efforts until March, when its mission is slated to end. To date, the Army Corps has ordered nearly 40,000 poles, 7,248 miles of cable and thousands of other items to rebuild the power grid decimated in September. Col. John Lloyd, the Pittsburgh district commander for the Army Corps, is the man on the ground in Puerto Rico leading the effort.

Lloyd spoke with Marketplace Weekend’s Lizzie O’Leary about what it takes to turn the lights back on in Puerto Rico, what has been accomplished so far and what is to come. The following is an edited transcript of their interview.

John Lloyd: The infrastructure was unstable before Irma and Maria, so you had a very unstable grid — lot of power outages before the storm. And now you have a category 5 hurricane that comes through and rips through the island and causes extreme damage on the transmission lines.

Lizzie O’Leary: And for people who are new to thinking about this, transmission lines are what moves the power from from plant to —

Lloyd: From the plant, those transmission lines carry power, and then it goes to substations along the way and continues to step it down until it’s brought to your house. You see most of the transmission lines were damaged. There’s two lines coming out of the south, to the north, that we’re still working on right now. But once those lines are completed, we think we’ll have a good transmission loop and have some stabilization.

Lloyd: So, for the Corps of Engineers, so we were given specifically the mission from FEMA and we serve as FEMA’s lead engineer. We were then given the mission at the end of September, a mission assignment to lead the planning and design. We have our own contractors that work for us and we coordinate this very closely with PREPA.

O’Leary: My understanding, and please correct me if I’m wrong, is that you all are handling, what about 70 percent of it and PREPA got about 30? Is that the right figure?

Lloyd: I think that’s initially what we kind of saw 70/30, I think was a good estimate. It may be more 60/40 now and it kind of changes as we get more boots on the ground.

O’Leary: As you mentioned, this is an island. Where is all of this stuff coming from? And, have you been impacted by the Jones Act?

Lloyd: So let me answer your first question, so most of the equipment is being manufactured in the United States. So, poles, wire, conductors, insulators — you name it, whatever it is, we have priority to receive that. The bottom line with that is that there just is a shortage in the United States with those components, based on all the damage that was done during the other hurricanes. So it’s been difficult to get that manufactured, get it in the pipeline and then loaded on a ship and brought here.

O’Leary: One of the things that I’m really interested in is the standard to which you can rebuild things. Under the law, FEMA has essentially dictated things can be restored to what they were pre-disaster. Are you making improvements to the grid or are you just allowed to restore them? Because they weren’t in great shape pre-storm.

Lloyd: The mission assignment gives us direction to do temporary repairs to pre-storm conditions. So that’s fairly specific. The fact is this — is that all the work that’s going to be done is going to be done to standard and to code. We know a lot of the work before the storm wasn’t to standard, or wasn’t to code. So of course going out there just by doing the work, it’s going to be brought up to whatever the current code is for that work to be done. So in one sense we were bringing it back to better than it was. But at the end of the day it’s going to be back to that pre-storm level of condition but just better standard — to code whatever that looks like.

O’Leary: How much of an impact did some of the lack of maintenance have on the lines around the island, and how much has that impacted your work?

Lloyd: I would say significantly in a lot those rugged areas, the terrain, a lot of the maintenance for the access roads hasn’t been done for years. I mean, just driving around you see a lot of vegetation overgrown on some of the lines. That would be normal work that a utility company would be responsible for. So a lot of that wasn’t done. That’s caused significant problems trying to restore the grid and it’s taken longer than it should.

O’Leary: One of the questions I have is when we’ve been out on the island and we’ve been in Hatillo or even in Toa Baja, which is not that far from San Juan, there were people who haven’t had power for two months. They are frustrated and they are hot. Why do you say to them about when they might have power back?

Lloyd: Nobody wants to get the power on quicker than me and my team, and PREPA, and everybody who’s doing this mission. The fact is the challenges are just extraordinary with doing this. I mean not only that the terrain causes us issues, the material, getting people in here — it just is one of the most challenging missions that we’ve really faced. I’ve been in many deployments, Afghanistan, Iraq, but these are Americans and this is important to get the power back on to them.

O’Leary: You said it. They are Americans. Do you think they’re being treated the way mainland Americans would be treated in a similar situation?

Lloyd: I absolutely think so. I mean we have brought in more generators to Puerto Rico than any other disaster mission the Corps has done. So more than Sandy, more than Katrina, more than in Texas, more than in Florida, just doing that mission alone and it continues to increase. Of course when the lights are off, it can’t be fast enough. You know, we know that. But I think when you look at the numbers and you look at the response certainly from the Corps of Engineers side of it, I think you can see that our response has far exceeded other responses.

Children thank the U.S. Army Corps of Engineers for helping to restore power to Puerto Rico.

Lloyd: So I mean, so the government of Puerto Rico is the answer. At the end of the day there, they’re responsible for the recovery. The mission assignment we currently have for power ends in March, unless there was an extension. But I think it’s going to take — I think long term, just with regard to power, that’s going to be a discussion with the government of Puerto Rico and the administration to figure out what how do they build a more resilient grid. What does, you know other methods of power, whether it’s solar, wind, upgrading their current power generation, that’s going to be a long-term discussion that they’re going to have to have with the administration. But it’s going to be a long term planning effort that’s going to have to take place.