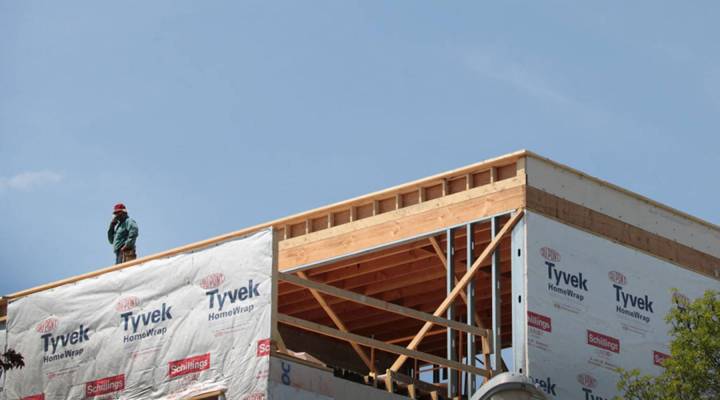 COPY
A worker helps to build a townhome complex under construction on May 15, 2017 in Chicago, Illinois. Scott Olson/Getty Images

A worker helps to build a townhome complex under construction on May 15, 2017 in Chicago, Illinois. Scott Olson/Getty Images
Listen Now

The big debate over the Republican tax bill is looming. According to Republican leaders in the House, the tax bill will be released Wednesday. Once it’s out things are going to get interesting because we’ll learn whose interests are on the line, who is for and who is against. But some opinions are already being voiced. The National Association of Home Builders has said it will “actively oppose” this bill. Marketplace host Kai Ryssdal spoke with Jerry Howard, the group’s CEO, about the NAHB’s thoughts on the tax bill. The following is an edited transcript of their conversation.

Jerry Howard: We look at tax legislation as having three components to it: personal taxation, business taxation and the commitment to housing. The framework of the proposal that came out about a month ago certainly demonstrated that it would have all three. But as we’ve gotten closer to the introduction of the legislation our understanding is that the commitment to housing, which is so important to us, will not be in the bill.

Kai Ryssdal: Do me a favor and break it down for the lay person in the audience, what exactly the issue is here with the tax credit and the mortgage interest deduction and the proposal that you thought was going to be in this bill.

Howard: Sure. The framework when it came out talked about leaving the mortgage interest deduction alone and not touching it. And as a practical matter, by doubling the standard deduction you are reducing significantly the number of taxpayers that would take the mortgage interest deduction, leaving the mortgage interest deduction only for the super wealthy. And we felt that a concept that we had been working on internally, of a tax credit for all homeowners, would go much more significantly to the middle class. So we approached Chairman Brady with that concept. We spent the better part of three or four months working very closely with his team on that. We were under the impression that it would be put in the document, only to receive phone calls on Friday and Saturday saying that it wouldn’t happen.

Ryssdal: Seems like Speaker Ryan perhaps and Congressman Brady of House Ways and Means they’ve got a little bit flatfooted on this.

Howard: Congressman Brady and I talked on Friday night. He was as disappointed as we were that the tax credit would not be put in. The Speaker told me that he has no policy problems with it but that it’s such a big new idea that he didn’t think we had time to explain it to the rank and file Republican members. I disagree with the Speaker on that and I’m very disappointed.

Ryssdal: Interesting you say there’s not enough time because the GOP is certainly hustling to get this thing done.

Howard: Yeah they say they want to get it done before Thanksgiving.

Ryssdal: I wonder whether you’ve considered that the secrecy with which the GOP seems to be writing this bill and how that may, as the details come out, lose them support from organizations like yours and others who don’t like what they see in this bill that they may not have known about.

Howard: I think that my experience in tax legislation, and its broad experience, leads me to conclude that when the details come out there’ll be a lot of people who are unhappy with the bill that would be the case no matter which party was writing or when it was being written. Tax legislation has significant winners or losers and my job is just to make sure that the housing sector is not one of the losers.

Ryssdal: Last thing then I’ll let you go sir, a lot of the pieces I’ve seen on this this morning about your change in position says you will “actively oppose” this bill, what does that mean?