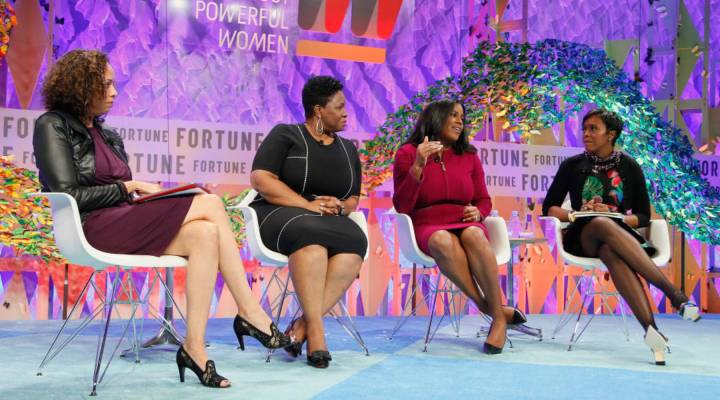 We’ve been reporting this week on a new study from Lean In and McKinsey on women in the workplace that covers 12 million people in America. The study finds that while 47 percent of entry level employees are women, only one-fifth of the chiefs — chief executive, chief financial and so on — are female. Only one in 30 are women of color, so where does that leave black women? Host David Brancaccio spoke with professor Ella Bell Smith from the Tuck School of Business at Dartmouth about the lack of black women in executive roles and what institutional barriers are preventing them from rising to the top. Below is an edited transcript of their conversation.

David Brancaccio: So I’m just kind of poking through the entire Fortune 500 list here: Target stores, AT&T, no. Wal-Mart, no. Kroger, no. I’m not finding African-American women as CEO at any of these Fortune 500 companies. What does that say to you?

Brancaccio: I mean, there’s certainly not parity even for white women when it comes to CEOs of Fortune 500. I think the number is up to 6.4 percent, which is an all-time high. Some are touting that, but some, I think it was Fortune magazine, dubbed this the “black ceiling.” What are ways to crack through that black ceiling do you think?

Smith: You know, we’ve used different metaphors when we wrote our book. We call it the “concrete wall.” To be able to advance, what we know that there are several things — you have to have good mentorship and sponsorship, which means that you have to have some type of relationship, constructive, positive relationship with the managers and executives in your company. You have to perform three times as hard. You have to really contribute to the bottom line of the business, which does not include HR, which does not include social responsibility. You have to really show that you can run a business. It’s very hard to do to get those positions, particularly if you’re an African-American woman. It’s hard if you’re a white woman. It is triple-time harder for African-American women and other women of color, too. This is not just a phenomena that hits African-American women. It hits us the hardest, though.

Brancaccio: So sponsorship, mentorship. It’s about fostering, nurturing, fertilizing a network within the company, I suppose on the board, but also among senior managers as a person is working their way up.

Smith: The formula I like to use is performance plus relationship equal advancement. The other thing is that, you have to understand too, that women have to be — particularly African-American women — the feedback they get, performance review, is not often good. It is not often constructed in a way where the woman can use the feedback that she’s getting. As a result, you really have to work with African-American women to make sure that they’re getting constructive feedback, feedback that they can actually use and incorporate what they’re being told to do into their daily work activities. And that doesn’t happen doesn’t often happen for white women either, but it happens less frequently. We find that managers, particularly white males, are uncomfortable giving feedback to women in general because they are afraid to be accused of sexism. When you think about African-American women, they get really scared because oftentimes they have never had any type of relationship with an African-American woman as a colleague, as a classmate, as a teammate, as a wife, as a mother, as a sister. So as a result, they’re often afraid to give their feedback because the fear of being accused of racism as well as sexism — not knowing how to interact with a black woman, she’s a unknown quantity, which makes very little sense in this day and age. But we find it holds true.

Brancaccio: So people end up with these performance reviews that are namby-pamby or nonspecific?

Smith: What we’ve learned is that because women don’t get constructive feedback, and sometimes they get feedback that is really inappropriate. It’s too harsh. They are told that they don’t fit in. They’re too aggressive. They’re too angry. They don’t connect well with other people. They’re told that they don’t know how to manage their authority. And you know, you keep getting these feedback over and over again, after a while you start believing it. So the other thing that I know that is critically important is that you’ve got to rebuild their confidence. You’ve got to rebuild their belief in themselves. You’ve got to rebuild their confidence that they can succeed, that they can do it, that they are worthy and that they have the skills necessary to really be what I called “diplomatic warriors.” To really get into the workplace and be able to share their visions, to be able to interact, build relationships, to be able to make hard decisions and to be able to make a difference.

Brancaccio: So interesting. Imagine the white guy who’s trying to work his way up the corporate ranks with an eye toward some day CEO. I mean, that’s going to be a tough customer. That’s a person who’s going to have a very good sense of himself, who you could say where you’re being a little bit too aggressive in your career or you’re a little bit too decisive, you’re not taking on enough information from your team, and with a guy, that might be seen as a positive. And you’re saying that often this is used against women, particularly black women, in the reviews they get.

Smith: That’s what I call the “gender dilemma.” Male behavior is fine as long as a white male is doing it. Male behavior is not good if a woman, particularly an African-American woman, is showing those. It creates fear, it produces conflict. People don’t know how to react, but yet, white males are rewarded for exactly that behavior. Black women, if they come in to aggressive, assertive — I like the word assertive — they’re told that they’re angry. If they come in too tough, they’re told that they need to soften. So there’s no right way that they can be. The flip side of that is if you come in trying to be more nurturing and more caring, then you hear, “Well, you’re not tough enough.” So it’s a very slippery slope. What I believe though, is that when you really work with a woman and have her bring her authentic self to the table, be able to talk about, be clear about who she is, be clear about what she brings to a table, with a touch of grace — I always say a touch of grace — to be able to do that. To be able to share what I call a leadership narrative, it begins to break down some of those barriers. Sometimes you have to coach a woman to be able to take that perspective, because after a while, you start believing what you’re hearing, and then you don’t know how to behave. Then you wind up sabotaging yourself, because you really are not bringing your full voice to the table. You can’t lead, you can’t make a difference, you can’t contribute if you’re only bringing half of yourself to work.

Brancaccio: So with the departure of Ursula Burns at Xerox, we’re left with no African-American women as CEO of the Fortune 500 to get us back.

Smith: I know, isn’t that pathetic?

Brancaccio: And when you broaden the category to women of color as CEO, you do get Indra Nooyi, who’s the boss at Pepsi, and Geisha Williams, who’s Latina, at PG&E, the electric utility. But are there companies that are taking this seriously and are doing better than others in trying to break down the ceiling for black women?

Smith: Well, you know, I think companies have a short history. We’re talking as if these women are new to the workplace. If you go back and look at our research in “Our Separate Ways,” we have second-, third-generation African-American women who have been in the corporate arena who have been very successful. I think of the Bridgette Hellers, I think of the Ann Fudges, I think of Jerri DeVard. They’re there. They’re there in few numbers, but they’re there. And I think we forget that black women have been on the corporate scene for a very, very long time. I think we also forget that black women don’t just represent a monocultural group. You have African-American women who come from high-middle class, upper-middle class backgrounds who are in the corporate arena, as well as those who come in with backgrounds from working class, working-class poor. They have different resources at their disposal or work at and to learn from, but no matter what they bring into the corporate world, it’s frowned upon. And I don’t know any company that consistently, and I have to say this, consistently, does a really good job at this. There are periods where you have one company, and I’m not going to name names, but you have some companies that, you know, you can check the box and it looks like “OK, we’ve got pipeline, we’ve got women who are in succession that are behind these women that can move into senior positions.” And then there are other years that there’s none of that. And what we also know is that the pipelines don’t remain. Black women, women of color wind up going to other companies where they think the grass is greener and they have a better opportunity. So they change companies. And that’s a problem with pipeline, too. But I can’t tell you that one company that has been consistently good at developing African-American women leaders and executives, and that’s pretty sad.

Brancaccio: I mean, it’s telling in itself that you and a collaborator 16 years ago came out with a book about this and it’s not like everything has changed since then.

Smith: Very little has changed. I think in the last three years, we’ve taken a stronger stand for women in the workplace. But when we talk about women in the workplace, we’re still talking about white women and advancing white women. Very little has changed. And the stories that we told in “Our Separate Ways” based on 10 years of research, those stories remain very much the same.