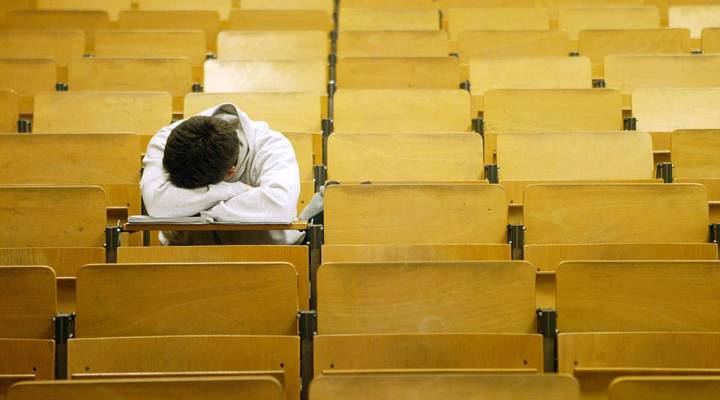 Cathy Cohen, a professor of political science at the University of Chicago, has some of those answers. She’s the lead investigator of GenForward, an ongoing study that looks at how 18- to 34-year-olds think about major societal issues, with special attention to how race and ethnicity factor in.

The focus of the latest survey covers education, including how much millennials value college, how well they think our K-12 system prepares us for the workforce and how they think the education system can be improved. Here are just a few of the results:

The relationship between college and success

Most people would probably agree that college is expensive — but is it worth it?

Cohen said that young African-American men and women often live in communities where access to a college education isn’t guaranteed, and can be difficult to attain based on cost and how well their education prepared them.

“They have seen individuals in their communities find other ways to succeed. In fact, it’s been a necessity,” Cohen said.

As for young, white millennials, Cohen said that factors like white privilege — which provides them with an opportunity to succeed without an education — might be at play. “The data tells us in fact that whites are more likely to get a job with just a high school education than some African-Americans with a college degree,” she added. “So, again, in terms of lived experience, certain young whites may look around and say, ‘Look, my father and mother were able to succeed’ — in terms of success being a job that put food on the table.”

Cohen said that for Latino and Asian-American groups, it may be a question of how they define success.

“So for these groups that may be heavily populated, in particular by members who are immigrants, getting a job — especially a basic job — may not guarantee success, and so success in that case is facilitated by a college education,” Cohen added.

But Cohen noted it’s important not to come away thinking African-American and white millennials don’t value education. “I think instead what we’re seeing here is that they understand that there have to be multiple pathways to success,” she said.

How good is America’s K-12 system?

The majority of respondents across racial and ethnic lines said that their K-12 education did indeed prepare them for college.

But fewer people from each group said  their school did an “excellent or good”  job preparing them for the workforce.

Cohen said she found data that students who were exposed to career training and technical education thought it was beneficial for them, giving them both academic exposure and skills that prepared them for the workforce.

“So we may again want to be rethinking how we think about curriculum and skills that are a part of an essential K-12 education,” she said.

Millennials across race and ethnicity strongly supported both charter schools (publicly-funded, privately-managed schools) and vouchers that would pay the tuition for students to attend private schools.

There was a lot of support from African-American millennials, in particular, for school choice.

“I don’t think that’s that surprising in the sense that in many African-American communities, it is hard to access quality education,” Cohen said. “And so those young people are supporting as many programs as possible that might improve education in their neighborhoods.”

However, Cohen noted that the survey also asked them to identify the top three interventions (out of a list of 13) they think would really improve K-12 education.

They found that the top three didn’t include charter schools or voucher programs. Instead, respondents picked an increase in school funding, an improvement of teacher training, and a rise in teacher pay as factors.

Is that student debt really worth the burden?