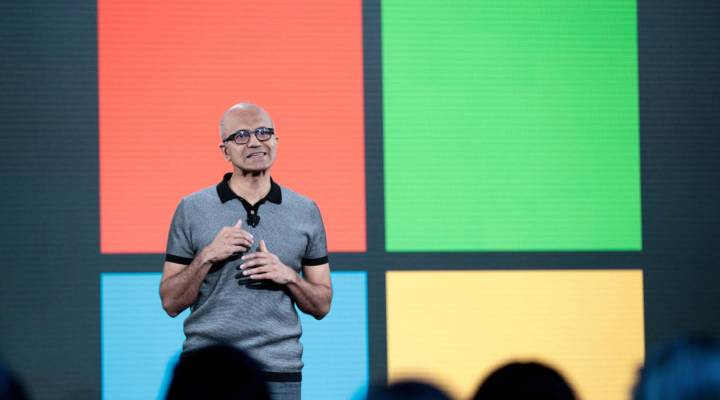 Microsoft CEO Satya Nadella talked with Marketplace host Kai Ryssdal about his new book and why he thought the company needed to “hit refresh.” Yesterday on Marketplace, they talked about why it was time to change the culture at Microsoft, his biggest mistakes, and Nadella’s thoughts on immigration and tax policy.

Today that conversation continues as Nadella explains his vision for Microsoft, the personal role Microsoft’s technology has played in his life, fixing the gender gap in technology, and what he sees as the “most important agenda” he has at the company. The following is an edited transcript of their conversation.

Kai Ryssdal: Part of the I guess theory behind you doing this book is to lay out your vision for the future of this company. You talk a lot about cloud technology which you ran before you got the top job. You talk about the HoloLens and augmented or mixed reality, a lot of talk about artificial intelligence here, which is all great and whiz bang. I wonder though if getting those right makes up for you guys having missed mobile?

Satya Nadella: I mean it’s always the case when a company like ours that’s been around for 42 years, and here we are competing with a whole lot of new people, and that means we got some things right and we may have missed some things. But the question is if you missed something you don’t rue that fact, you really look at what’s the next turn. We’re very excited about the cloud. That’s something that’s really driving a lot of our current growth, by the way. And now I believe the next big waves are going to be these two — mixed reality and A.I. and we definitely are on the forefront of it.

Ryssdal: Paul Allen and Bill Gates when they started this company, the mission was in essence a computer on every desk right so that people would be connected and that would change the economy, which it has. With all of these things you’re working on now — the cloud and the Hololens and A.R. and all of that. What does it look like if you are as successful as Bill Gates and Paul Allen were 40 years ago?

Nadella: When I joined the company even as late as 1992 we to talk about our mission as a PC in every home and every desk. And just by even the end of that decade, at least in the developed world, we had pretty much accomplished quote unquote “that mission.” That’s when it struck me that that was a goal as opposed to a mission. Our goal from the very first day when Bill and Paul created the very first product that this company produced, which was the basic language interpreter for the Altair, was to create technology so that others can create more technology. That’s what I see.

Nadella: That was a much later because he’s had many surgeries and one night I was sitting in a hospital room and watching all of the machinery, all of these computers around the children’s hospital in Seattle that in fact were running many of them windows and it hit home that the work we do here is so ingrained in our economy and in our society. And here it is, in his most perilous time, he’s sitting, I mean he’s in a hospital bed managed with devices and software that we built.

Ryssdal: It bears a mention here and you say this in the book, I’m not making this up, you basically would not be here if it were not for your wife. And her having given up her career as an architect to care for the kids including Zain and a daughter who’s got some learning challenges. Talk about that for a little bit.

Nadella: Yeah I mean that’s absolutely right. Anu is my life partner her and I’ve known her all my life. We grew up together. But for, quite frankly, the sacrifices she had to make I wouldn’t be here. She has been able to hold the front and home with Zain and all of the other challenges we face, but also as someone who through all of this, as helped me grow. She’s the one who has influenced a lot of how I think on the most important topics.

Ryssdal: One of the things that’s big in tech right now — and has been for a number of years but is becoming more pressing — is the issue of diversity and specifically women in technology. What is Microsoft’s role in that, and how do we boost that pipeline? Because tech companies always say “oh we don’t have women in the pipeline! So, you can’t blame us if 4 percent of our engineers are women.” How do we fix that?

Nadella: Well I mean there’s two sides to it I think. One is we have to make it more amenable, inviting — computer science as a curriculum. But the first place where I want us to, instead of worrying about the supply side, we at this company have to every day get better at the diversity and inclusiveness of the people who are already here. Because the best way we can make it more attractive for more women to join computer science, join companies like Microsoft is for them to come here, thrive here, feel a sense of belonging and inclusion. That’s I think what’s the most important agenda I have in this company.

Ryssdal: Do you feel like you have a clue as to what’s going on down in the cubicles and building 72 across the hall.

Nadella: You know one of the most intimidating things that I do is this town hall which is a Skype broadcast where people can have live emojis, feedback which is all anonymous on what I’m saying. And I analyze it afterwards. How many thumbs up or thumbs down I got. So quite frankly—

Ryssdal: Is it really that easy thumbs up or thumbs down?

Nadella: And there’s lots of other emotions too people express. But you know it’s always hard. You’re absolutely right that being a CEO means that sometimes you get abstracted from what’s happening. But I think the real power comes when you are able to synthesize. And there is, it really is something that you have to take and make a conscious decision and take time on.