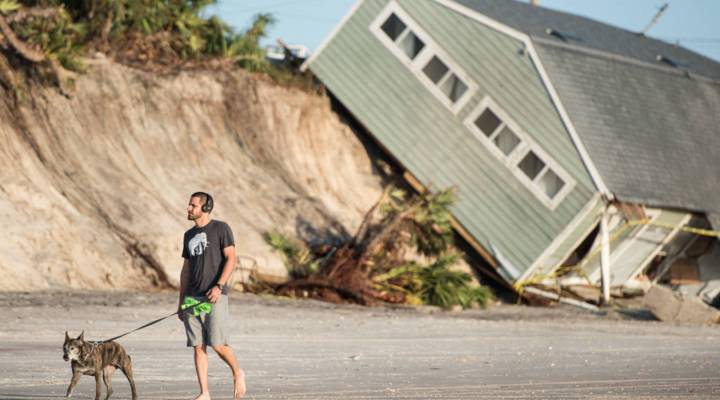 There’s some insult being added to the injury in Florida this week. On top of the flooding and the wind damage — and damage to property of other kinds — it’s especially difficult right now for Floridians to get their insurance claims processed. The problem being that a lot of the insurance adjusters are in Houston, because Harvey got there first.

Leslie Scism wrote about Florda’s insurance adjuster shortage today in the Wall Street Journal. Marketplace host Kai Ryssdal spoke with Scism about her piece. Below is an edited transcript of their conversation.

Kai Ryssdal: You point out in this story that Florida is especially vulnerable to this kind of shortage just because of the way the insurance market works. Explain that a little bit.

Leslie Scism: Florida has a very unusual market and it has developed in this unusual way since Andrew in 1992. The big insurance companies, the big household name home insurers, have been shrinking their footprint there. In their place have come a lot of small to mid-size insurers. They don’t tend to have these big fleets of in-house adjusters so they turn to what’s called the independent adjuster market.

Ryssdal: So that’s where the competition is. Freelancers basically is what is what most of them are?

Ryssdal: And is there then the commensurate supply/demand thing going on that if you’re an insurance gesture in Florida you’re doing alright?

Scism: A lot of companies are scrambling to find enough insurance adjusters now to handle Irma’s claims and they’re having to raise pay. So if you’re still in Florida and you’re an independent adjuster you’re gonna make a little more money than you would have, had Harvey not already hit. And some of those Harvey adjusters are coming back to Florida now but they’re wrapping up their work or some of them are leaving before they wrapped up. But they’re eager to come back to Florida and get the higher pay now.

Ryssdal: And there’s a great anecdote of one guy you talk to for this piece driving around in his RV. And that’s how he does it, he’s got his office in his in his RV.

Scism: We learned in reporting this that a lot of these independent adjusters are what are called cat chasers. They go around in the wake of catastrophes and earn a lot of money. In the couple of months immediately after, adjuster’s can make $60,000 to $100,000 in a month if they work really efficiently and do their work fast.

Scism: Right. And as another person told us it’s not like wine that supposedly ages well. So, yes because as houses just sit there without the homeowner having money for major repairs, there could be some worsened damage — could be mold, could be other things. But another concern in Florida is the plaintiffs lawyers will start to connect with large numbers of these homeowners and these claims will become litigious matters. If the lawyers get involved that could drive up the costs quite about it.

Ryssdal: You point out that the state of Florida is actually trying to get more folks certified to address these insurance claims. One imagines it cannot be an arduous process to get that sort of certification then.

Scism: To get a license requires about 40 hours. So it is a little late for people to come down there to Florida and think they’re going to get a license and then get certified with an insurance company. So, I have had a few readers send e-mails asking how they can can go about getting licensed there. But there is a process.