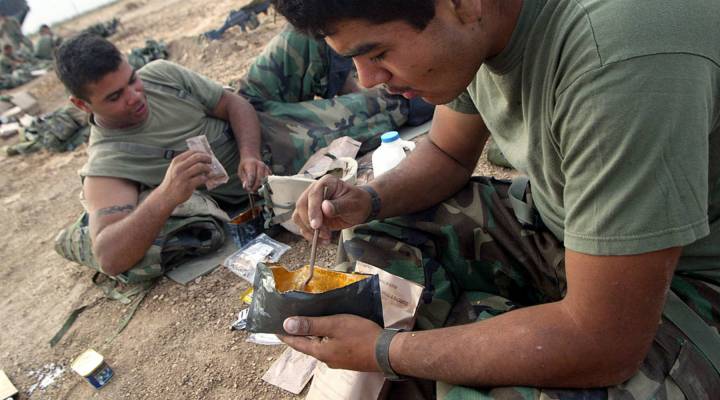 The day after its deal to buy Whole Foods was finalized, Amazon slashed prices at the notoriously high end grocery chain. All of a sudden, a pound of Fuji Apples that previously cost $3.49 was now $1.99. A rotisserie chicken went from $13.99 to $9.99. Avocados went from $2.79 to $1.99. Overnight, Whole Foods got more affordable … and became more competitive in the grocery market.

However, in its pursuit of world domination, Amazon is not hoping to gain customers just among those people who shop for their groceries at Whole Foods. The company is also looking to get into the kitchens of those who barely make it to the grocery store, who have Seamless on their phones and their go-to takeout places on speed dial. In addition to getting into your home fridge with fresh ingredients, Amazon is hoping to get into your pantry and even your office fridge.

How? By selling meals, ready to eat, usually known by their acronym, MRE.

Weeks before the Whole Foods deal was approved by the U.S. Federal Trade Commission, Reuters reported that Amazon was exploring selling MREs. The meals, which were initially designed for consumption by military personnel out in the field, do not need to be refrigerated and come — as the name suggests — ready to eat.

At the moment, consumers can purchase MREs via the Amazon marketplace from independent vendors. However, the Amazon MREs that could hit market as early as next year would be made in-house by the retail giant.

“Amazon has largely succeeded in almost every other vertical they have created, but food is the new one. For food, maybe no idea is crazy enough for them,” said Andrew Alvarez, a lead analyst at IBIS World who specializes in food services and hospitality.

“It sounds a little weird, it sounds a little crazy — you are eating food that has been microwaved and vacuumed sealed — but people are still giving soylent a try, for example. It’s kind of hard to gage market response to something like this,” explained Alvarez. He has never tried MREs but has tried soylent. “And to be honest, I’d prefer MRE over soylent,” he added laughing.

Military Meals, Ready to Eat (MREs) packages are shown February 21, 2002 at the Army-Navy Surplus USA store in Chicago. The U.S. Department of Defense has contracted with food scientists at Washington State University to try and develop macaroni and cheese that will remain tasty and nutritious for three years after it is cooked.

While MREs might not include fresh ingredients, they could compete with meal-kit delivery services that require subscribers to do the actual cooking, Alvarez said. MREs are likely to appeal to people who work long hours, like millennials, who are too tired to cook when they get home, according to Alvarez.

“I’ve tried Blue Apron,” said Kinton Connelly, who runs the MRE website mreinfo.com and is intrigued by Amazon’s potential foray into the MRE industry. “It’s kind of fun. It’s kind of easy, but I can see where the next step is meals that are already packaged and ready to go.”

In order to successfully market these meals to millennials and other office workers, MREs will have to undergo a rebranding. At the moment, they are viewed as meals reserved for war zones, Doomsday preppers or the zombie apocalypse.

Perceptions around the palatability of MREs is the first barrier to rebranding. MREs could potentially replace current frozen dinners and canned food options, if they passed the taste test.

According to Connelly, MREs have gotten better over time. After all, the military wants the meals to be consumed. They don’t want soldiers to get sick and tired of eating the same thing over and over again. Menu options have grown — there are currently 24 meal options, consisting of 240 items, according to Eater. The technology behind MREs has also improved and there are a number of technology companies currently exploring making the meals more culinarily appealing to the general public. One of these companies is 915 Labs, which is Amazon is reportedly in talks with.

“The one comment that you get the most from people when they first try an MRE — ‘Wow that’s not as bad as I thought it would be’ or ‘that’s not bad at all,’” explained Connelly. “It’s not fine cuisine. You are not going to say: ‘Wow, that’s the best thing ever.’ Have you ever had SpaghettiOs? The military spaghetti probably tastes like that. So it’s not a fine pasta dish but it’s good. It’s decent.”

A British Army soldier from the 3rd Battalion The Parachute Regiment cooks his ‘ready to eat’ individual meal ration during operation Southern Beast on August 6, 2008 in Maywand District in Kandahar Province, Afghanistan.

While MREs may not ever get to the point of fine dining, they do distinguish themselves when it comes to shelf life. Currently, MREs are required to last for three years at 80 degrees Fahrenheit and six months at 100 degrees Fahrenheit. Since they do not require refrigeration, such meals can be stored in any of the Amazon’s warehouses and easily shipped to potential customers. This is also one of the reasons why commercial MREs are already popular in countries where refrigeration is hard to come by.

MREs also spike in popularity around the time of inclement weather or other scenarios, where electricity, refrigeration and cooking might not be an option. Take Connelly, he got interested in MREs in late 1990s, when people worried about the turn of the century and what the change from 1999 to 2000 would mean for technology.

“It was back during the Y2k time, when there was a lot of concern about what was going to happen. Was the country going to fall apart when all this technology fails?” said Connelly. “As I was looking around at all the various preparedness options for food, I came across these MRE things. I’ve always been curious about them.”

Having done a lot of research on the subject, he decided to put it in one place which is how mreinfo.com was born. Over the years, the audience for the site has shifted from a niche group of veterans who missed MREs to a more varied and international audience. The website often sees spike in traffic during inclement weather situations such as hurricanes — either right before or right after.

“It doesn’t hurt to be prepared. It doesn’t hurt to have extra food in the house — especially food you can store long-term, for whatever happens,” said Connelly. He pointed out that Federal Emergency Management Agency and Center for Disease Control and Prevention have issued “Preparedness 101: Zombie Apocalypse” guides that advise consumers to stock up on non-perishable food items. “And it’s just in jest, but I guess the idea is if you are prepared for the zombie apocalypse, you are prepared for anything.”