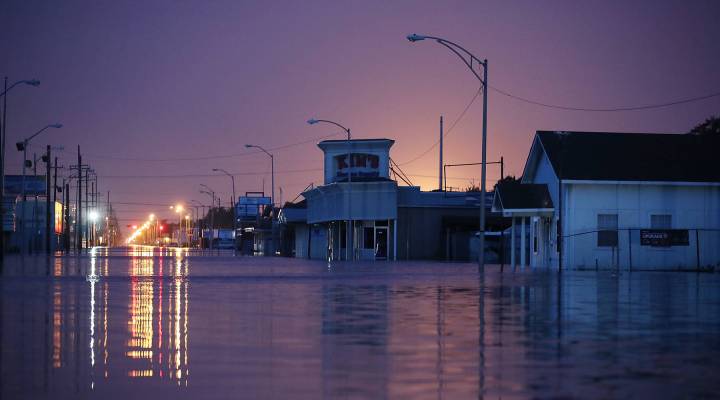 COPY
A flooded street is seen after the area was inundated with flooding from Hurricane Harvey on August 31, 2017 in Port Arthur, Texas.  Joe Raedle/Getty Images
Weather Economy

A flooded street is seen after the area was inundated with flooding from Hurricane Harvey on August 31, 2017 in Port Arthur, Texas.  Joe Raedle/Getty Images
Listen Now

In the wake of Hurricane Harvey, as is the case in many events that displace people in life-changing ways, there has been a significant community response, including a big effort from the faith community in Houston.

Even though Houston’s — and the nation’s — largest megachurch, Joel Osteen’s Lakewood Church, came under fire for not immediately opening its doors, many churches, synagogues and mosques have become makeshift shelters for people stranded by flooding. In the weeks and months to come, religious organizations will disperse donations and funding to their congregations and the community.

That’s certainly the case for Rabbi Oren Hayon and his synagogue, Congregation Emanu El, in Houston. About 2,000 families worship at Congregation Emanu El — a large portion of Houston’s Jewish population. The synagogue was largely spared from damage during the storm, and now Hayon and his team are working quickly and collaboratively to help people coping with the aftermath.

“One thing that we’ve done this week is to set up a full-day day camp, starting tomorrow, throughout the whole holiday weekend,” Hayon said. “It’s a day camp that will be open all day long serving breakfast, lunch and dinner to kids of all ages whose families have been affected by the storm.”

Congregation Emanu El is partnering with other groups to help run the program. Day camps, diapers and other assistance that might not fall into the hands of national organizations or the Federal Emergency Management Agency is, in some ways, easier for faith groups to implement.

They’re on the ground, they know the neighborhoods and they have a built-in method for collecting donations and supplies, and distributing them to their congregation and the community.

“Financially … we can be particularly agile in collecting financial contributions and dispersing them fairly quickly and fairly nimbly,” Hayon said. “The gifts come from the heart. They’re distributed in ways that are immediately effective and immediately meaningful. That’s not to say that we take the places of some of those organizations and federal agencies, because we really, really need them. But I think there’s a really terrific partnership and synergy between local faith organizations and state and federal agencies to help with the relief effort after a storm like this.”

Hayon said that faith communities in Houston are working together to help each other and ensure people are safe and comfortable, with some religious leaders gathering for a group meeting.

“Houston is a really wonderful place where representatives of all faith traditions work and collaborate and cooperate very amicably and productively,” Hayon said. “We’re starting to see the development of really strong coalitions of religious professionals and religious organizations across denominations and across faith communities.”

The work that Hayon and others in the faith community are doing will have to continue, given the extent of the damage Harvey has caused to the city. Hayon said that his synagogue will be adapting its plan for providing aid. Right now, it might mean helping people find hotel rooms or providing towels for a shower. In a few weeks, it could be assisting in apartment searches or helping to fund a down payment for a new car. In a year, it could be deeper assistance, helping people recover assets damaged or lost in the storm.

“There’s certainly no way to estimate the scope of the need. It is absolutely inestimable. It absolutely goes beyond anything we can imagine at this point,” Hayon said. “Our ability to help over time can evolve as the needs of the community evolve.”