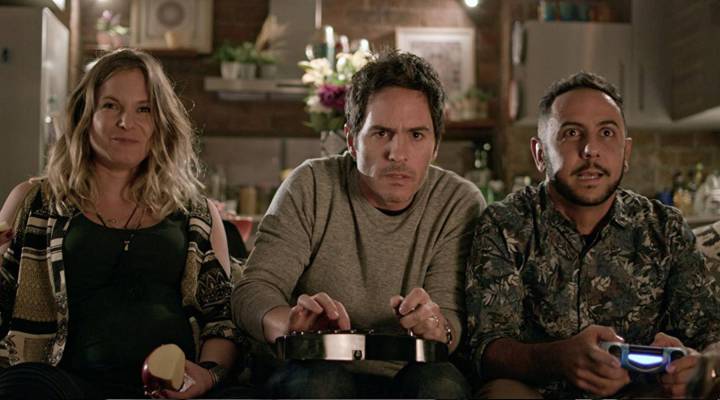 Nicolás Lopez is a Chilean filmmaker who’s latest film, “Hazlo Como Hombre” (“Do It Like a Man”) broke box office records in Mexico and opens in the U.S. over Labor Day weekend. Lopez is no stranger to breaking box office records. His film “Sin Filtro” (“No Filter”), released last year, beat out “Rogue One,” the latest “Star Wars” movie, at the box office in Chile. He talks to Marketplace host Kai Ryssdal about creating his own Chile-wood, not making movies for art, and why he makes more money on his films without Hollywood’s help. The following is an edited transcript of that conversation.

Kai Ryssdal: What’s it like waiting for this movie to open in the States after the success you had in Mexico?

Nicolas Lopez: It’s crazy, because it’s a movie that nobody wanted to make.

Lopez: Yeah, but that has been the history of my life. I always try to make things in a very different way, and people always get really, really scared, and then when they’re a success, everybody is like, “Oh yeah, we always knew.”

Ryssdal: I’ll tell you what, this movie, while we’re not going to give it away, does things in a very different way. You’re Chilean.

Ryssdal: And yet you did this film in Mexico with Mexican actors. How come?

Lopez: Yeah. It’s even weirder than that. I shot this movie in Chile with Mexico actors. So I brought everybody down to Chile.

Ryssdal: All right, I had it backwards, OK.

Lopez: And we shot everything there. And we shot the movie really, really fast. We made this movie for less than a million. We made it for, like, $800,000 or something like that. And the thing is that because I created a system in Chile that we call “Chile-wood” —

Ryssdal: No man, it works, branding is everything.

Lopez: But the thing is that we make, like, five movies per year. So I have everybody on staff. From my DP to everybody that’s on post-production. So we are forced to make movies.

Ryssdal: Well, this so interesting, so are you are a filmmaker or are you an entrepreneur?

Lopez: I think that I have always been an entrepreneur, because being a film director in Chile is like being an astronaut in Zimbabwe, you know? It’s like something that doesn’t make any sense, at all, whatsoever. That being said, I have produced more than 30 movies, and what happened to me is really cool, because I ended up making movies here in the U.S. Like we did that movie two years ago called “Knock Knock” starring Keanu Reeves. And we shot that whole movie in Chile, we shot Chile for L.A. And the movie went to Sundance, but then the movie was, like, dumped. It was, like, a DOV release.

Lopez: Exactly. So it was really frustrating. And then I was like, “You know what? I need to make a really, really, really cheap movie.” And I did a movie for less than $300,000 that was called “Sin Filtro” or “No Filter.” And that movie ended up grossing more than “Star Wars” in my country. And then it was like, that’s their way of making movies for the U.S.

Lopez: Yeah. Because more money’s more problems. And I think the thing about what happened here is that people love to talk about making movies but they don’t like making movies. And they love the whole part of like, “Oh, my agent, and my whatever, and we’re dealing with this.”

Ryssdal: You know you’re sitting in L.A., right? I mean those kinds of people are, like, surrounding you.

Lopez: I know, and it’s all about, like, “Oh, my lawyer.” At the end of the day, it’s like people care more about their contracts and everything than actually making the movies, because they know that if one movie hits, they are rich. And what happens with me is that if one movie hits, it’s amazing. But then I need to make another one and another one and another one. It’s like going to the gym. And right now what happened with “Hazlo Como Hombre” is that our production company, with everything happened in Mexico, of course we’re getting way more money than if I were making. like. a big movie here in the U.S. To put things in context, we made 2.5 times more than “Dunkirk” in Mexico. And two times more than “Baby Driver” with a movie that costs $700,000.

Ryssdal: So what’s really funny is you say you don’t want the hundred-million-dollar budget, but you count those pennies, man, because you know exactly how much —

Lopez: For sure! I’m at producer and I’m a director. I’m not being an artist at all. I want to make movies for really big audiences. But the thing is that I don’t want to have to be involved in the whole process without being my own boss.

Ryssdal: Can we talk for a second about how Latinos are portrayed in your films. You were quoted, I guess, in the L.A. Times, not too long ago, you want to show Latinos “as normal people, not all poor and barefoot and we don’t know what Wi-Fi is.”

Lopez: And I said that like 10 years ago. Yes, of course. The thing about Latinos is that I realized that I was Latino when they came here. I was like, “Oh, so I’m a Latino, so what, do I have to be, like, eating tacos?” Can somebody explain to me what is being a Latino? Because I’m from Chile. I was raised watching big Hollywood movies from the ’80s. I was watching “Ghostbusters” and “Back to the Future” and “The Terminator,” and those were my movies. And every TV show that I watch was TV shows from the U.S. But I also have a huge influence from Spain, from Mexico. So when I got here, suddenly it was like, “Oh, people are trying to put me in a box because because I was born in South America.”

Ryssdal: You’ve alluded to this a little bit, how we in the States think Latino, and it’s everybody south of the Rio Grade, but it’s actually, there’s Chileans and there are Mexicans. And the idea that there’s a Spanish-speaking film industry is just a misnomer.

Lopez: It’s interesting, because I think that the best thing that happened to us in a really weird way is Trump, because now we have reason to hate somebody as a group. Because what happened before is that Argentinians didn’t like Chileans, Chileans didn’t like Peruvians. So we were very separated. So now we have a common enemy. And in a way, that’s amazing. You see that people are watching more Mexican films in Mexico, because that’s also a reaction and that’s how suddenly we made a movie in Chile with Mexican actors that was released in Mexico and now it’s being released in the U.S. It’s insane.