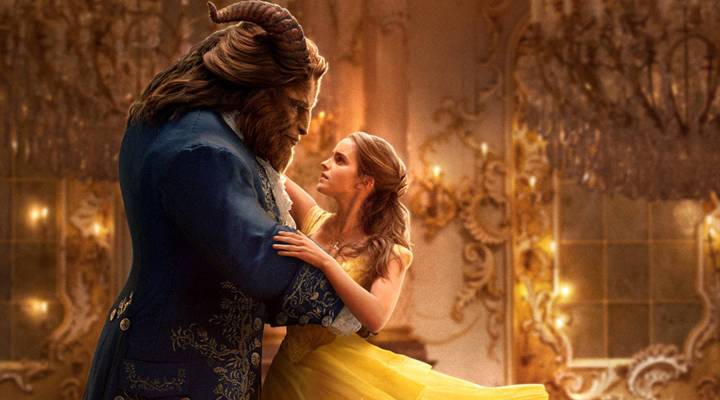 COPY
Dan Stevens is the beast and Emma Watson is Belle in Disney's live-action film. Disney

When Disney’s live-action remake of “Beauty and the Beast” opened in theaters last weekend, it broke a bunch of box office records. That’s pretty good news for Todd Lieberman and David Hoberman, the producers at Mandeville Films who made the film for Disney. Lieberman talked to Marketplace host Kai Ryssdal about the experience. Below is an edited transcript of their conversation.

Kai Ryssdal: How did it come to pass that you and your colleagues at Mandeville were the people that Disney said, “Yes, please do this ginormous movie for us.”

Todd Lieberman: Well, it’s one of those stories, I guess, that you can kind of trace back to several years ago —

Ryssdal: Like nine years ago, I mean, this thing’s been in the works forever.

Lieberman: Yeah. We had the idea a long time ago to do, frankly, a movie about the beast, had several drafts of that done. And then “Frozen” came out. And Disney knows their brand better than anybody, and they’re kind of geniuses across the board. And [chairman at Disney Studios] Alan Horn and Sean Bailey [president of production for Walt Disney Studios] called and said, “What do you guys think about taking this and going back to the beloved 1991 film and kind of doing that with the available technology now?” So it was their idea and they were right.

Lieberman: Sure. Absolutely. Yeah. And when we say “the beloved 1991 film,” we knew it was beloved, but boy, we didn’t know how beloved it was. And that movie is revered.

Ryssdal: Did Bob Iger, when this deal got signed or whatever Hollywood does when a deal — greenlight, right? When it got greenlighted — did Bob Iger sit down and say, “Listen don’t blow this?”

Todd Lieberman is a producer at Mandeville Films, which made the live-action version of “Beauty and the Beast” for Disney.

Lieberman: No, look, I mean there’s no overt pressure of “If you guys don’t do this, then X Y Z.” It’s kind of inherent in the pressures on all of us including them. We all feel the same pressure.

Ryssdal: Talk to me for a second about the choices you made to diverge, I guess, from the original, right? The Belle backstory and a little bit more about why the beast or the prince or whatever he’s probably referred to is, in fact, the way he is.

Lieberman: We all collectively wanted to make sure that the story was fleshed out more so than what may have been allowed or normal in an animated film. So there was always a question in fans of the film of what happened to Belle’s mom, and we figured that was probably a good question answer. And that’s really the tricky balance in this thing, is not changing the original film that people revere to the degree that they do so much that it doesn’t feel like that movie. But at the same time giving people enough — more candy and emotion to kind of latch on to to justify being made.

Ryssdal: Along those lines, acknowledging that you’ve been at Disney now for a long time, you and David [Hoberman], are you guys now made men at Disney with this smash runaway hit?

Lieberman: That’s not a question I could answer really, but I’ll say I don’t think there’s any anything but joy coming out of this experience from anybody. You know, I’ve had the fortunate — I was fortunate to come into a scenario with David 18 years ago where I think he probably was already a made man because he had run the studio, so I kind of drafted off that goodwill. But yeah, as it stands right now, I would imagine everybody’s pretty happy.