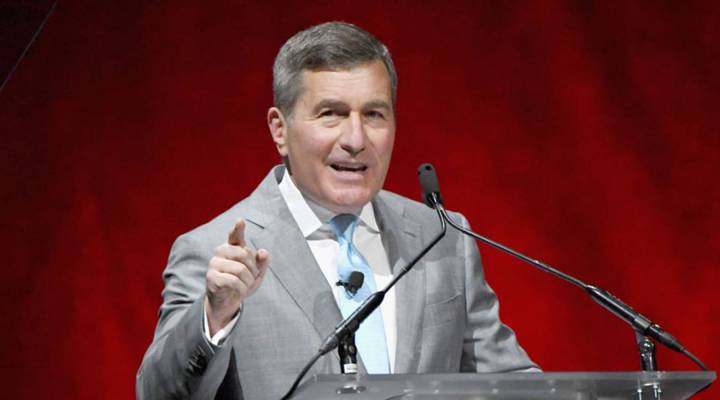 COPY
“My industry and me in particular, we were one of the first out in support of the tax deal that [President Donald Trump] put forward," says Charlie Rivkin, CEO of the Motion Picture Association of America. Above, he speaks at CinemaCon in April in Las Vegas. Ethan Miller/Getty Images for CinemaCon
Corner Office

“My industry and me in particular, we were one of the first out in support of the tax deal that [President Donald Trump] put forward," says Charlie Rivkin, CEO of the Motion Picture Association of America. Above, he speaks at CinemaCon in April in Las Vegas. Ethan Miller/Getty Images for CinemaCon
Listen Now

Most people are familiar with the Motion Picture Association of America, even if they don’t know it — the MPAA’s familiar film rating screen generally appears between the previews and opening of a movie for home and theater audiences. The MPAA is a trade organization that works for some of the major Hollywood studios and with other content creators on issues like piracy, incentive programs for film production and promoting access to foreign markets for Hollywood films.

Charlie Rivkin became the CEO of the MPAA in 2017. And he might be uniquely suited to the position — he worked for The Jim Henson Co., including a stint as CEO, and later served as the U.S. ambassador to France, then an assistant secretary at the State Department under President Barack Obama. He talked to Marketplace host Kai Ryssdal about Hollywood entertainment as soft power and more. What follows is an edited transcript of their conversation.

Kai Ryssdal: A lot of people will know you mostly or even only by the logo that flashes before all the movies and all the trailers, the ratings and all of this. What else does the MPAA do?

Charlie Rivkin: It’s true our brand identity does come from the fact that —

Ryssdal: Brand identity? You are a CEO aren’t you?

Rivkin: Well, it’s the truth. I mean, the MPAA is seen on the trailers, like you said, and it’s known for its rating services, but that is only one part of what we do. We are probably the premiere anti-piracy force in the world. We open up markets for our studio members, we work with states and governments around the world to provide incentives for production and we fight piracy as a primary goal.

Ryssdal: Let me ask you actually since you mentioned it right off the bat, anti-piracy. Obviously a lot of that in the news of late with President Trump and China and the intellectual property and forced technology transfer tariffs that he’s putting into place. How does your business, your industry feel now about the theft of its intellectual property?

Rivkin: Well, you mentioned a couple of different topics, and if you want to talk about anti-piracy and theft of intellectual property, we are making some great strides. China is a different topic.  In China, what USTR, the U.S. Trade Representative, is working on is the continued access to their market for our entertainment product.

Ryssdal: Are you suffering from market access both in China and around the world? I mean, it seems it seems you can get American movies pretty much anywhere.

Rivkin: American movies are very popular in China. Very popular. And China is soon to be, if it isn’t already, the single-largest film market in the world. It went from about $800 million in 2011 to about $8 billion today. So it’s a market that’s very important to my members, and we want to make sure that our product is present.

Ryssdal: You guys are out actually with a new report not too many months ago about viewing in dollar amounts and how basically you did it at the global box office. And I guess that’s the key part of that question, right? It’s a global box office.

Rivkin: Well, it’s great because there’s enormous growth outside of the United States.

Ryssdal: Let me ask you what may come off as a slightly touchy question, but you roll the dice when you walk into the studio. We’re in a moment now where because of the political situation in this country, the perception of this country and perhaps its cultural properties is changing overseas. How much of a concern is that for you and for your members?

Rivkin: Well it’s in many ways the golden age of content. When you say it’s changing overseas, I don’t know exactly what you’re referring to, but —

Ryssdal: Well, let me let me state it baldly, right? President Trump is not making a whole lot of friends in many ways across the country, right, with his trade policies, with some of his pronouncements on the way America is going to run itself internationally. And yet you have a product, your members have products, that depend, as you said, on the global market. Are you worried about that?

Rivkin: So starting with President Trump, I should say that my industry and me in particular, we were one of the first out in support of the tax deal that he put forward because our studios were paying a tremendous amount of money in a high tax rate, 35 percent versus the 21 percent. President Trump has shown a great interest in protecting copyright and property. And the president himself and other members of his administration had actually been in the entertainment business, and they understand it’s not just a great job-creating machine — 2.1 million Americans go to work every day in all 50 states — but it projects our soft power abroad, and I don’t believe that our consumers around the world are confusing politics with entertainment.

Rivkin: Tell that to my studios.

Ryssdal: Well, you know, one hopes they’re listening. What does the American film industry and your members, what does it look like?

Rivkin: Well, box office continues to expand. New markets continue to grow. So overseas, we’re going to see, we going to continue to see dramatic growth. In fact, China I mentioned went from $800 million to $8 billion, but China grew 22 percent last year and Latin America, 21 percent. But the growth to our member companies is not just box office. It’s television, it’s digital video services and home entertainment, and I believe the market will continue increases as distribution vehicles increase.