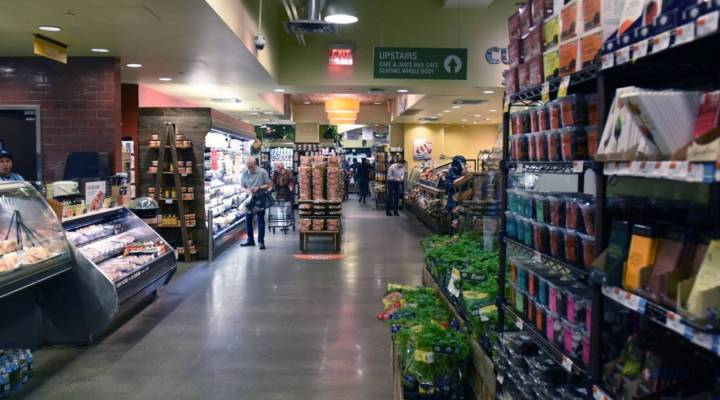 COPY
A view of a Whole Foods market in New York. TIMOTHY A. CLARY/AFP/Getty Images

A view of a Whole Foods market in New York. TIMOTHY A. CLARY/AFP/Getty Images
Listen Now

The Federal Trade Commission has decided that Amazon’s plan to swallow up Whole Foods is fine by them.

The FTC investigated whether the $14 billion merger would decrease competition, stating on Wednesday that it would not “pursue this matter further.”

But when it came to another large retail merger, the $6.3 billion merger between Staples and Office Depot last year, the FTC rejected the deal.

It’s important to note that approvals don’t necessarily have to do with the size of the companies involved, explained Erik Gordon, a professor at the University of Michigan.

“Antitrust law is not about just being big. Because there’s nothing bigger than Amazon,” he said. “It’s about substantially lessening competition in a particular market, and the fact that somebody big goes into the market doesn’t necessarily mean competition goes down. It actually could go up.”

And in the case of the Amazon-Whole Foods deal, the terms of the competition were unclear. Because of Amazon’s digital roots, there’s a new paradigm here for retail that hasn’t been fully explored in the marketplace.

“In a sense, it’s an antitrust experiment,” Gordon said.

But it was easier to tell with Staples and Office Depot because of their brick-and-mortar locations.

“You looked at stores, you looked at contracts. It’s pretty easy to say, ‘Well, you guys have stores across the street from each other, so if you merge competition is lessened,'” Gordon said. “But what do you do when you face an Amazon or a Facebook or a Google? It’s new territory that the FTC is going to have to figure out.”

And it’s an industry that seems like it’ll be facing plenty of shake-up in the near future — especially since Google and Walmart have just announced that Walmart products will be available on Google Express.