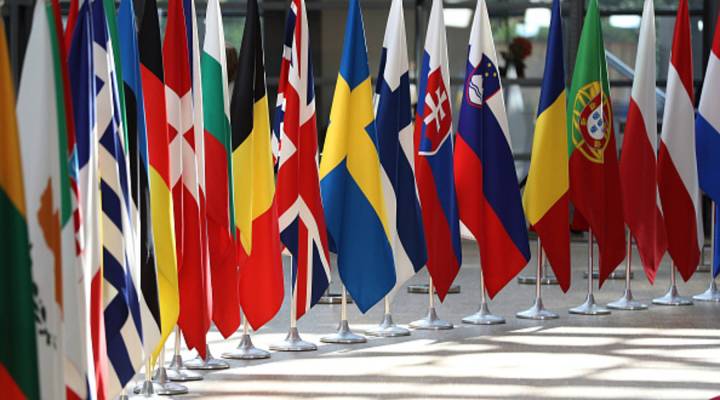 COPY
Is our world getting more or less globally connected? Dan Kitwood/Getty Images
Trade Off: Stories of Globalization and Backlash

Earlier this week, negotiators from the U.S., China and Mexico met around a table to reopen talks on NAFTA — one of the trade agreements President Trump promised to overhaul during his campaign, along with the rest of the way the U.S. does business with the world. But does all this hostility toward globalization mean the world will see less of it?

Probably not, says Pankaj Ghemawat. He is a professor at IESE Business School and New York University’s business school, and he studies globalization for a living. Ghemawat is the lead author of the DHL Global Connectedness Index, which tracks data on cross-border flows of trade, capital, information and people to paint a picture of globalization and to monitor changes. He joined us to talk about whether global trade is losing steam.

David Brancaccio: For most of my adult life, borders were dissolving and goods and people were moving more freely across the globe. Now you have Brexit in Europe, and we have moves under Donald Trump to harden U.S. borders. Is globalization done, do you think?

Pankaj Ghemawat: Well, that’s certainly what a lot of people are saying, and I think I’ll sound the contrary note here: The sentiments have moved around more than the actual numbers. Globalization, so far in the last 12 to 18 months, has been going sideways. It hasn’t nosedived nearly as sharply as public sentiment or the tone of media coverage actually has.

Brancaccio: But clearly something’s different with Brexit [and with] Trump administration[‘s] moves towards greater protectionism. It’s a different chapter in globalization if indeed globalization isn’t going away.

Ghemawat: We are unlikely to live in a world in which globalization goes to zero. Given that, it’s important for business people and others to make some contingency plans about what does happen if we get a hard Brexit, or what does happen if the NAFTA re-negotiations, whenever they conclude, do lead to a significant raising of barriers. But I think it’s very, very silly to either plan for a world of either total free trade or a trade-free world.

Brancaccio: Think globalization gets too much of the blame for the stagnation that many middle-class people feel in the developed world?

Ghemawat: I think that that’s something that most academic economists would agree on, which is quite rare, in fact. [To understand why that is] compare the Netherlands and the U.S. The Netherlands has trade exposure roughly six times the U.S. level. Given that, and given that the Dutch still managed to preserve a more reasonable income distribution, I look at what’s going on in the U.S., where clearly there are some major distributional concerns, and point to the fact that if the U.S. really isn’t one of the world’s most trade-intensive countries, [it] probably [has] something to do with domestic policy and changes in technology that plays as large, if not a larger role, in the outcomes that we’re observing.