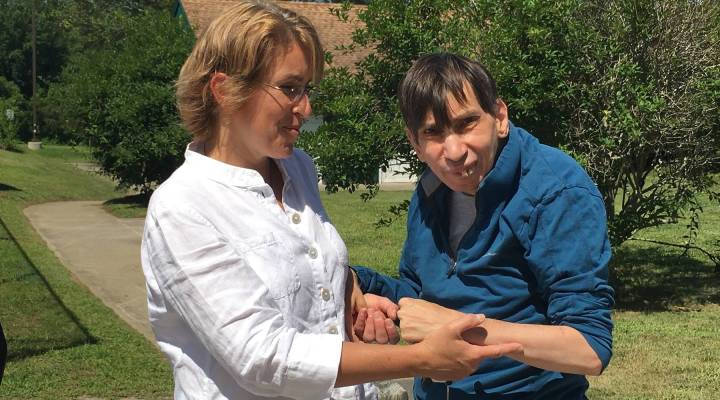 Barbara Deindorfer lives in North Stonington, Connecticut. The 52-year-old cares for her older brother, John, who has severe intellectual disabilities. She became the full-time caretaker for her brother two years ago, when her mother died.

“We were left in a situation, really, where we were lost,” she said. “I was trying to work, I was trying to take care of the kids. John was a handful.”

She reached out for help, but it was several months before she was able to locate a daycare service for John.

“I remember the exact moment, and this voice came on the phone. I can’t say it without crying, because she said, ‘Look, I just want you to stop, and I’m going to take care of you,’” Deindorfer said.

The service she found was through a nonprofit called The Arc, which contracts with the state of Connecticut to provide care for the developmentally disabled. But now the state may cut funding for the service.

Connecticut is one of the richest states in the nation. It has the highest per capita income in the U.S., and many of the nation’s hedge fund managers are based there, in close proximity to New York. And yet, Connecticut is facing down a multibillion dollar budget gap for state services in the next two years.

He said the state’s current $5 billion budget gap is the result of eight decades of financial mismanagement in Connecticut’s capital, Hartford, with politicians failing to put money away to meet the pension bill for state employees, combined with a delayed recovery from the Great Recession that has eaten into tax revenues.

With those bills coming due, it looks likely that social services will be hit hard. State employees have also had to give back — a recent agreement negotiated with unions could see $1.5 billion cut from the state’s labor expenses over the next two years.

But Republicans in the legislature want to limit collective bargaining and cut pension benefits even more.

“Middle class workers have done their part by saving the state billions of dollars,” said Darnell Ford, a union member and state worker, at a recent rally in Hartford. “Now it’s time for our legislators to do their part by asking the billionaires and corporations to do the same.”

Bruce McGuire represents some of those billionaires as president of the Connecticut Hedge Fund Association. He said that the several hundred funds based in and around Greenwich, Connecticut, manage about $750 billion in assets.

“Connecticut is actually the third-largest center globally of the hedge fund industry behind only New York City and London,” he said.

Some lawmakers have been eyeing that potential piggy bank. A bill in the legislature this year would have taken aim at what’s known as the capital gains tax loophole, because fund managers pay taxes on their earnings at a much lower rate than income tax. McGuire said there’s an issue with that.

“This is not a heavy industry,” he said. “We’re not talking about big plants and heavy equipment — we’re talking about people with cell phones and Bloomberg terminals that can be very portable.”

He said there would be no better way for Connecticut to encourage hedge funds to decamp to another state than to consider what the industry would see as punitive tax measures.

And it appears his message is gaining traction. Speaker Aresimowicz said he’s dubious that the wealthy are really fleeing this state, but raising their taxes is a political nonstarter, even in this traditionally blue state where the gap between the rich and poor is one of the widest in the nation.