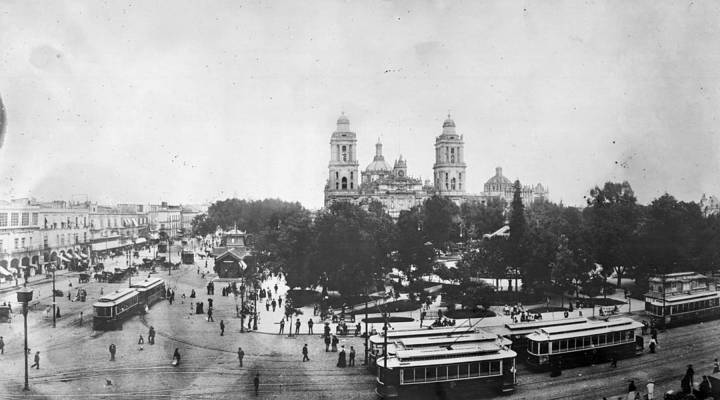 William O. Jenkins isn’t exactly a household name, but he was once among the richest and most influential men in Mexico. Jenkins was born in Tennesee in the 1870s. In his 20s, he moved to Mexico and started investing in everything from sugar to movies. Eventually, he became a millionaire magnate with a lot of friends in high places. Andrew Paxman, who teaches history and journalism at the Center for Research and Teaching in Economics (CIDE) in Mexico City, has a new book that details Jenkins’ life: “Jenkins of Mexico.” Marketplace host Kai Ryssdal spoke to him about this little-known slice of history. The following is an edited transcript of their conversation.

Kai Ryssdal: I’m going to go way out on a limb here and guess that most of the people listening to this interview have never heard of William O. Jenkins. Give us the thumbnail sketch, would you?

Andrew Paxman: This is a story about a Tennessee farm boy who elopes with his Southern belle girlfriend, drops out of Vanderbilt and heads for Mexico in 1901, and 50 years later is the richest man in the country. And how he gets there is a story of investments in textiles, in property trading, in sugar and in the film industry during the golden age of Mexican cinema. One of the great ironies of this story is that in the 1950s, Mexico had the world’s third-largest film industry, just after Hollywood and India, and yet the man who profited the most was an American, William Jenkins.

Ryssdal: It is also a story, you say in this book, of him having the guts to buy when not quite blood was literally running in the street, but almost. He took advantage of the Mexican Revolution, he took advantage of his political connections, and he built his fortune almost by hook and by crook.

Paxman: As you know, the famous Baron Rothschild saying, “The best time to buy is when the blood is running in the streets.” That’s what Jenkins did during the Mexican Revolution. A lot of old-money Mexicans, their estates were being sacked by Zapatista rebels. They were in dire straits, a lot of them. And Jenkins was cash rich at the time. He made a lot of predatory loans, and at the end of the revolution he cashed in, so during the revolution he managed to quintuple his fortune from $1 million to $5 million.

Ryssdal: Is there an allegory to an American tycoon? The one that comes to mind is John Rockefeller, but does that apply?

Paxman: Jenkins very much was influenced by the so-called robber barons, and he imbibed that culture of hard-driving business practices, monopolistic practices, all that kind of thing. But then the other fascinating parallel with the robber barons is that, like them, he decides to bequeath his entire fortune to charity. You might say that he out-Carnegies Andrew Carnegie.

Ryssdal: I want to skip to the end of the book a little bit and draw some analogies and parallels to today. The epilogue in this book basically draws a line between William Jenkins and Carlos Slim, who I would bet most of the listeners of this program have heard of, at one time the richest man in the world, certainly now the richest man in Mexico. Give me the parallels, would you?

Paxman: There’s a business genealogy, first of all. William Jenkins’s right-hand man was a banker called Manuel Espinosa Yglesias, and Manuel Espinosa in turn became the richest man in Mexico in the 1970s. He became something of a mentor to Slim, and then, of course, Slim in the ’90s becomes the richest man in Mexico. There’s also the idea of businessmen who got ahead in great part through political relationships. I hesitate to use the word “crony capitalists,” because it’s a nebulous term that covers a lot of sins. I tried to make the case that they are both entrepreneurs and also men who have taken advantage of close relationships with state governors and even presidents of the country.

Ryssdal: What do you suppose Jenkins would make today, and granted he died in ’63, so he’s been gone a while, but what would he make of the Mexican-American economic relationship of today?

Paxman: Well, Jenkins was very keen on bringing the United States and Mexico closer together. And I think he would be troubled by some of the sounds coming out of Washington at the moment. I should say that he was not in the export business. All of the money he made in Mexico was reinvested in Mexico. But he was very keen to disabuse Mexicans of their prejudices of the United States and vice versa.