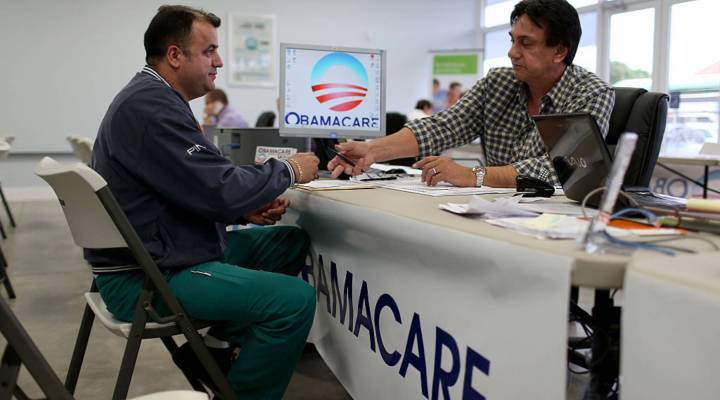 COPY
Ariel Fernandez, left, sits with Noel Nogues, an insurance adviser with UniVista Insurance company, as he signs up for the Affordable Care Act in 2015 in Miami. Joe Raedle/Getty Images

Ariel Fernandez, left, sits with Noel Nogues, an insurance adviser with UniVista Insurance company, as he signs up for the Affordable Care Act in 2015 in Miami. Joe Raedle/Getty Images
Listen Now

For as much as President Trump has pushed to repeal Obamacare, the administration is quietly moving ahead with several programs aimed to slow health care spending in Medicare and Medicaid. It turns out, as health care keeps gobbling up more and more of our economy, controlling costs is something everybody agrees is a problem.

Tucked into the 900-plus pages of the Affordable Care Act is a provision that created something called the Center for Medicare and Medicaid Innovation.

“The Innovation Center was specifically charged with trying to develop new ways to pay for care that increase value,” said Dr. Amol Navathe, a University of Pennsylvania economist. “When we think of value here, we are thinking better patient outcomes for lower costs.”

Traditionally, Medicare pays doctors and hospitals for every service performed. In recent years, the Center has rolled out several programs designed to pay for value, rather than volume.

One is the bundled payment program, where providers keep spending below a fixed amount for a procedure, like a hip or knee replacement. Any savings is shared between providers and Medicare, but hospitals or doctors pick up the tab if they go over budget. Nearly 550 physician practices and hospitals have signed up, including at Penn Medicine in Philadelphia.

Dr. Eric Hume and physician assistant Kristel Dow-Frey huddle around a computer reviewing the case of a patient who wants her hip replaced. In the past, the team typically signed off on surgery quickly. Under bundled payments, providers want to make sure everything goes smoothly. If the patient has to be readmitted, for example, the hospital may lose money. Ironically, before the ACA, if a patient came back, the hospital would make money.

So now, Hume and the team are more judicious, delaying surgery for months until the patient is in better health to minimize any complications.

“We tell the patient the risk of having a heart attack or a stroke is related to how well their blood sugars are controlled,” Hume said.

A new program to reduce wasteful care has changed how Dr. Eric Hume and surgeons around the country perform joint replacements.

Surgeons across the country have begun adopting this more cautious approach as the bundled program has ramped up. Shifting how doctors’ do their jobs, to get them to think about their patients more completely so they can root out wasteful care is a key goal, Penn’s Navathe said.

“Each provider basically works in their own silo. I, as an office-based physician, for example, am going to see my patients and not think too much about the hospital,” Navathe said.  “The idea here is if we start to think about what’s happening in the continuum of care, then we can really unlock some efficiencies.”

The limited evidence that exists on bundles show modest financial savings, about 4 percent per procedure.

There’s a lot of evidence about another of the Center’s programs, the more ambitious Accountable Care Organizations, or ACOs.

Under ACOs, doctors and hospitals are responsible for all of a patient’s costs for the year, aiming to keep spending under a benchmark. In 2014, they saved Medicare $700 million, or half a percent of the program’s spending. Tiny, yes, said McWilliams, but a beginning.

“This has been sort of the holy grail of health policy to try to establish incentives to both lower spending and improve, or at least lower spending without harming quality, and so far this has been progress in the right direction,” McWilliams said.

Can ACOs achieve more than half a percent savings?

In a statement, federal health officials told Marketplace that the Department of Health and Human Services is committed to finding and testing new models. McWilliams said the question is how much the Trump administration wants to roll up its sleeves to improve what the Obama administration started.