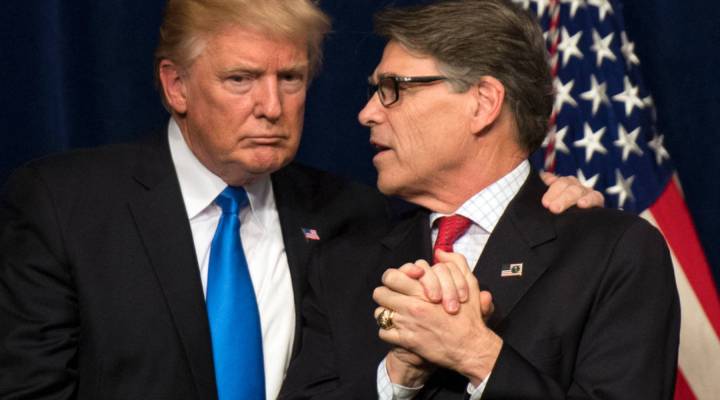 It’s no secret the Trump administration believes in fossil fuel “dominance.” Key to that belief is the idea that renewable energy is unreliable — that if coal-fired electricity keeps shrinking, the lights could one day go out. President Trump has suggested this, as have the heads of the Environmental Protection Agency and the Department of Energy. The DOE has been studying the question at the command of Secretary Rick Perry, and a draft of that study was leaked. Scott Tong from our Sustainability Desk joined host Adriene Hill to discuss it. Below is an edited transcript of their conversation.

Adriene Hill: What did the Energy Department find? What’s the study tell us?

Scott Tong: The staff draft did not really find what the secretary appeared to be looking for. The draft said it’s not so bad. Or to quote the document “The grid is in good shape. System resiliency continues to improve.” So the question is, what’s the final report going to say? Because it’s due now.

Tong: It’s a complicated answer. So come with me, Adriene down the rabbit hole for a moment. The grid is not, as the Flintstones suggested to me growing up, some assembly line of stegosauruses behind the wall. Sorry to break this news to you. I’ve been able go on a couple of tours of grid operators, and it’s this giant engineering exercise in redundancy. There are backup plans for everything. What if this plant goes down? What if this transmission line goes down with the wind doesn’t blow? Or the control room goes down? There’s even a second control room. So let me play you a bit of sound from a visit last week to the folks who operate a part of the grid in the east from Tennessee to New Jersey to Illinois. Stu Bresler is senior vice president of what’s called the PJM Interconnection. And he was asked by reporters if more renewables and less coal harm reliability.

Stu Bresler: I don’t think we’ve seen that. I think it’s safe to say that from PJM’s standpoint, we haven’t seen a degradation in reliability at this point, but we need to make sure we stay ahead of it. We did this analysis on the basis of retirement of all the coal and nuclear on the system and all that being replaced by natural gas. We would run a reliable system.

Hill: Scott, though he’s talking about natural gas there. And I wonder what we know about wind and solar reliability?

Tong: That’s been tested in the country. So in the Southwest U.S., the wind power provided 52 percent of electricity in the system in February. It was not a problem. In Secretary Perry’s home state of Texas, wind provided 48 percent of electricity at one point last year — not a problem. In New England, coal power is almost gone from this system, and that’s of no concern. These are declarations by the grid geeks. These are the reliability police telling us that.

Hill: So it sounds like the study certainly doesn’t back up the administration’s claim that we need more coal. What happens now?

Tong: First of all, this is a draft, and it can always change when the political appointees get their hands on it. That happens with any administration. They could massage it to argue for coal subsidies. They could try to undo state policies on renewable energy, as Secretary Perry has suggested, and rhetorically this allows fossil fuel proponents to keep asking the question: Are renewables bad for the system? To many, this is kind of an old question that’s been answered. But here in Washington, you know, old questions have a way of developing constituencies, and they get backed by money and they never go away.