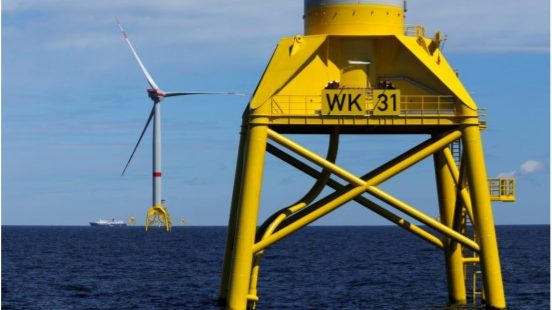 The nation’s first large-scale offshore wind farm has been delayed by the federal government, leaving unclear how long it will be until America’s next renewable energy sector will launch. The main opposition: outspoken commercial fishing interests in New England.

On most afternoons in Point Judith, Rhode Island, commercial fisherman Brian Loftus steers his trawler back into port after a 12-hour day. Loftus unloaded some 1,500 pounds of whiting, scup, skate and squid. Estimated revenue: $3,000. Loftus has fished for three decades here, but to him there’s a looming problem: Offshore wind developers plan to plop turbines more than 70 stories high into his fishing grounds.

At issue: Vineyard Wind, the nation’s first large-scale offshore-wind farm, 14 miles south of Martha’s Vineyard and Nantucket. Vineyard Wind had scheduled construction to begin by the end of 2019. It is the first of several offshore wind farms planned on the Atlantic Coast; the projects span from Rhode Island all the way down to the waters off North Carolina.

But commercial fishing organizations, as well as the federal National Marine Fisheries Service, raised concerns about the impact of large wind farms on marine ecology and commercial fishing operations. Last month, the federal government put a surprise halt to the permitting process, saying it needed to further study the broad impacts of all offshore wind projects in the queue.

For its part, Vineyard Wind said its project was designed to limit its geographical footprint on key fishing grounds in the area.

“Vineyard Wind’s proposed wind farm and related permit applications were built upon a solid foundation of extensive scientific information,” the company said in a statement, “which clearly demonstrates no significant impacts to fish or fisheries.”

The delay could impact Vineyard Wind’s project, independent analysts told “Marketplace.” The developer has signed an agreement to sell electricity to Massachusetts utilities beginning in 2022 and hopes to take advantage of a federal wind energy tax credit that expires at the end of 2019.

For offshore wind proponents, the setback delays the launch of a new energy sector in the country. One industry study suggests the offshore wind industry may create 36,000 full-time jobs.

Many of those jobs would be in construction, engineering and heavy industry. The local union in Boston representing ocean pile drivers and divers is preparing for those opportunities.

“I did consider going offshore in the Gulf [of Mexico] after I graduated dive school,” said union diver Shane Boedeker, referring to offshore oil and gas work. “But I’d be a little more excited to be part of a green energy movement that they’re doing up here.”

One New England port city trying to thrive in both economies — commercial fishing and offshore wind — is New Bedford, Massachusetts. One of the country’s most valuable fishing ports, due in part to a thriving scallop economy, New Bedford has partnered with the state of Massachusetts to invest in a marine commerce terminal to serve offshore wind construction and maintenance work.

Already, the terminal is host to land-based wind turbine blades awaiting delivery to other parts of the country. Want a sense of the scale of these blades? Note the human being in this photo below.

How long will this first offshore project be delayed? The federal Bureau of Ocean Energy Management, the lead agency in the permitting of such projects, said on its website that it “anticipates completing the Supplemental EIS [environmental impact study] late this year or early next year.”

Some observers, however, argue the offshore wind delay has less to do with science than politics. They note President Donald Trump regularly derides wind energy in his stump speeches and that Interior Secretary David Bernhardt, who has final say over project permits, is a former lobbyist to oil and gas drilling interests.

“This Interior Department in the Trump administration has done everything possible to reduce environmental reviews for drilling,” said Jesse Prentice-Dunn of the Center for Western Priorities, a conservation group. “And so to say that offshore wind suddenly needs more robust review seems rather hypocritical.”

If this initial project’s pause turns into a delay of a year or two, wind energy analysts tell “Marketplace” that momentum in the entire U.S. offshore wind market could stall.