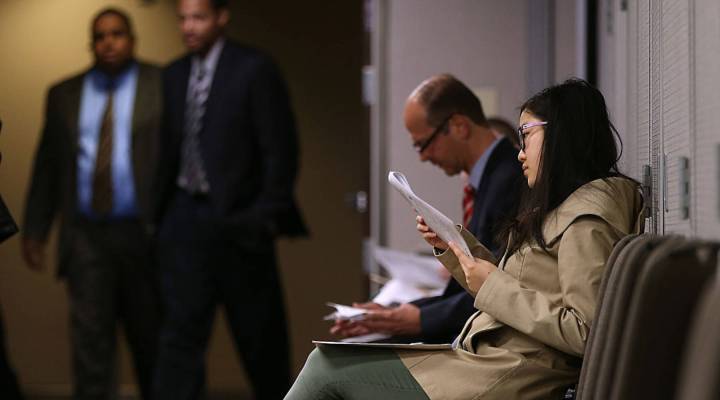 WASHINGTON (AP) — U.S. employers added a robust 222,000 jobs in June, the most in four months, a reassuring sign that businesses may be confident enough to keep hiring despite a slow-growing economy.

The Labor Department says the unemployment rate ticked up to 4.4 percent from 4.3 percent in May, which was a 16-year low. The rate rose because more Americans began looking for work and not all of them found jobs.

The government also revised up its estimate of job growth for April and May were revised up by a combined 47,000. In the first six months of this year, hiring has averaged nearly 180,000 jobs a month, only slightly below last year’s pace.

Yet even with the strong hiring, average hourly pay rose in June by just 2.5 percent from a year earlier. That’s below the 3.5 percent pace typical of a healthy economy.

Friday’s jobs figures arrive against the backdrop of a mixed picture of the U.S. economy.

Home sales are chugging along, though a shortage of properties for sale suggests that the pace of purchases could flag. The number of people signing contracts to buy homes — step that precedes final sales by a month or two — has fallen for three straight months.

And auto sales are slowing from last year’s record pace, causing some automakers to cut jobs.

At the same time, surveys of manufacturing and service companies indicate that growth in both sectors may be accelerating. Factory activity is expanding at the fastest pace in three years, the Institute of Supply Management, a trade group of purchasing managers, found.

The economy grew at just a 1.4 percent annual rate in the first three months of the year, below even the sluggish 2 percent average pace in the eight years since the recession ended. But most economists have forecast that growth rebounded in the April-June quarter to an annual rate of 2.5 percent or higher.

Still, the economy appears resilient enough for the Federal Reserve to keep raising its benchmark interest rate. The Fed has signaled its belief that the economy is on firm footing as it enters its ninth year of recovery from the recession, with little risk of a recession.

Consumers have expressed confidence in the economy and, accordingly, are spending more than they did in the first three months of the year. But they are displaying caution about their spending, which barely rose in May.

President Donald Trump has boasted that hiring and the economy have significantly improved since he took office. Yet job growth has slowed from its peak in 2016.