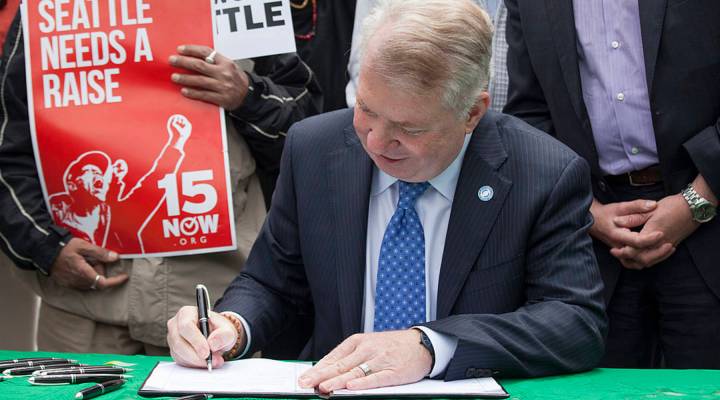 There was a study out this week from the University of Washington and the National Bureau of Economic Research that’s raising some questions about how to frame minimum wage increases in this country.

Mark Long is a professor of public policy at the University of Washington and co-authored a study that looked at what happened when the city of Seattle started implementing minimum wage increases.

Kai Ryssdal spoke with Long about what he found and possible implications for minimum wage increases elsewhere. Below is an edited transcript of their conversation.

Kai Ryssdal: What was it that you found exactly in this study?

Mark Long: We were looking at what happened in Seattle when it raised its minimum wage from $9.47 an hour, which was the state’s minimum wage, up to $13 an hour. What we found is that, in exchange, that hours were reduced by about 9 percent. As a result of that combination, we found that earnings were reduced for these low-wage jobs.

Ryssdal: So employers, realizing that we’re going to have to pay more per hour, cut people’s hours.

Long: That is what it appears to be.

Ryssdal: If you separate out higher-income wage earners in the Seattle area — the folks in the high-tech companies — and you go to the restaurant workers, and the ticket takers in the movies, and more low-wage service kinds of jobs, where do you see the impact of the wage decreases the greatest?

Ryssdal: What are you seeing out of people, activists across the country, who are driving for a $15 minimum wage, who say this is the way to get working people in this economy a living wage. And they look at your study and they go, “Wait, what?”

Long: Well, I think there’s two things you should take away from this. One is there should be some concern about the disemployment effects, particularly of local minimum wages, in particular when it’s a large increase in the minimum wage. [Disemployment effects are] reduction in the job opportunities, the jobs and the hours available. But the other thing you should be thinking about is what are the distributional effects? And that’s one of the things we plan to study. So for example, is this causing a reduction in opportunities for teenagers while at the same time promoting the opportunities for low-wage heads of households? And if that is the case, it may be worth it, the tradeoff between promoting the living-wage opportunities for working adults who have children in exchange for reduction in teenage job opportunities.

Ryssdal: If I’m a labor activist in Sheboygan or New York City or Portland, Maine, what do I take from this?

Long: Well, you should take, of course, this is one study in this in one area. And so you should be concerned whether what we’re finding is a particular artifact of it being Seattle. I think they have a strong belief that this is a way to improve the lives of low-skilled workers and their families. But that said, they should be tempered by some of this evidence in their enthusiasm, particularly when they’re talking about local minimum wages. Again, a state or a federal effort is likely to have a different effect.