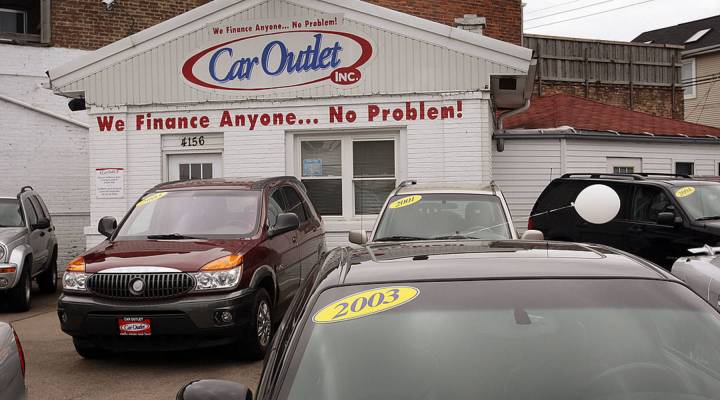 What are subprime auto loans?

Subprime auto loans are loans given to consumers who would be ineligible for regular car loans for reasons like having a low credit score or not having a high enough income. Since these loans are riskier, they tend to come with higher interest rates, higher fees and longer terms. For example, deep subprime loans for borrowers with credit score of 300 or less can come with interest rates as high as 20 percent.

So, what happens when borrowers cannot make payments?

This is where it gets tricky. Since these are asset-backed securities, the lender first repossesses the asset — the car. So now the borrower has no car to get to work and is still stuck repaying the loan.

Because most cars depreciate as soon as they are driven off the lot, borrowers are often saddled with car loans that exceed the value of the car. So even after the car is repossessed and sold, there is often a balance left on the loan. As a result, some lenders have taken borrowers who default to court to sue them for the remainder. When lenders win in court, borrower’s wages can be garnished until the balance is paid off, which can be devastating for those living paycheck to paycheck.

To ensure that more borrowers can pay off their loans, lenders have also started to offer subprime auto loans with longer repayment periods, which allows for lower monthly payments. But that also means that the balance of the loan collects interest for a longer period of time. And the longer the loan, the less the car is worth by the end of it. About 12 percent of those who took out a loan to buy a car ended up with a loan for a longer period of time than the amount of time they actually expected to own that car, according to a recent survey.

Subprime auto loans and the troubles that tend to come with them have also caught the attention of the late night host John Oliver.

“Theoretically it is a good thing that car dealers lend money to people who can’t get financing elsewhere, but in practice these dealerships can trap people with few options into paying vastly more than the car is worth,” Oliver explained in August of last year. “It’s just one of the many ways that when you are poor, everything can be more expensive. The average interest rate on the buy here, pay here lot is 19 percent, with some paying up to 29 percent.”

Not really. The whole premise of subprime loans is that they are riskier than prime loans, so if people default it’s not exactly unexpected. A certain percentage of the loans are expected to default. But the number of delinquencies has been climbing since 2014, which is concerning.

According to a recent report by Fitch Ratings, subprime auto loans issued in 2015 are experiencing net losses at a rate projected to reach 15 percent. These losses are even higher than losses on similar bonds from 2007.

What’s more, some banks seemed to have given out loans willy-nilly. Consider this report from Moody’s Investors Services that was released in May. It found that Santander Consumer USA — one of the largest subprime auto lenders in the U.S. — only checked the income of eight percent of its applicants before giving them a loan.

Is this going to crash the economy like the subprime housing loan crisis?

Probably not, for several reasons. One, big banks, which invested heavily in the subprime housing loan market, are slowly shying away from subprime auto loans. Two, compared to mortgages, auto loans make up a much smaller portion of the U.S. household debt. And three, while houses whose owners default can be difficult for banks to sell in order to recoup losses, there is always a market for used cars. Still, banks are starting to back away from these loans.

If the economy is not going to crash, why are banks backing away from these loans?

Because lenders have a hard time making money off of these investments. It might take lawsuits and a lot of chasing down borrowers to make a profit.

During the first three months of this year, JPMorgan Chase issued just $8 billion worth of auto loans to its portfolio, down 17 percent from last year. Gordon Smith, head of the bank’s consumer banking division which issues such loans, told the Financial Times that subprime loans now make up a dramatically smaller portion of its auto loans mix.

Back in 2015, Wells Fargo announced that subprime car loans will only make up 10 percent of its new car loans, limiting its exposure to the subprime market.

Last year, Jamie Dimon, CEO of JPMorgan Chase, described the auto-loan market as “stretched,” adding: “Someone is going to get hurt. … We don’t do much of that.”

“There’s a problem with subprime auto, which we see,” Dimon said in April. “But subprime auto is so small relative to the U.S. debt market it won’t make a difference to the system.”

Auto loans make up about nine percent of the total U.S. household debt of $12.72 trillion. As of March 31, the breakdown of the debt is as follows:

And just about 3.8 percent of that $1.17 trillion is seriously delinquent — defined as payments have been overdue for three months or longer.

As for securities such as those bonds that we were talking about earlier, as of end of March just $192.3 billion of them are backed by outstanding prime and subprime auto loans, according to the Securities Industry and Financial Markets Association.