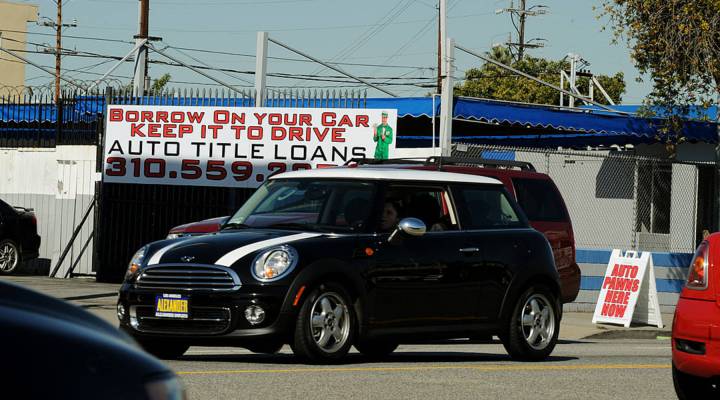 COPY
The delinquency rate on car loans is up slightly but subprime car loans are shrinking.  MARK RALSTON/AFP/Getty Images

The delinquency rate on car loans is up slightly but subprime car loans are shrinking.  MARK RALSTON/AFP/Getty Images
Listen Now

The total outstanding debt for new and used auto loans, as well as leases, climbed to a record high of $1.027 trillion in the second quarter, the credit bureau Experian said.

The share of subprime and deep subprime loans, aimed at borrowers with poor credit, increased within that broad pool of outstanding debt.

But Melinda Zabritski, senior director of automotive finance at Experian, said subprime borrowers’ share of new loans dropped compared to the same quarter last year. The share of deep subprime loans, for borrowers with credit scores as low as 300, was unchanged.

“If you look at the entire market, loans and leases combined, the market is very, very prime,” she said.

Experian’s latest State of the Automotive Finance Market report suggests that what’s going on in the subprime part of the market isn’t cause for alarm, even though 30 and 60-day delinquencies climbed.

It’s worth noting that over the past year, Experian changed its standards for what it considers subprime and deep subprime, taking a more lenient tack on what category borrowers would fall into.

“The ranges shifted to simply be consistent across the industries Experian analyzes,” Zabritski said in an email.

Chris Kukla at the Center for Responsible Lending is worried that those subprime and deep subprime borrowers will get into trouble.

According to Experian, the average term on all new car loans is 68 months. Kukla said that’s up from more like 62 months a few years ago.

Meanwhile, the average monthly payment for both new and used vehicles is climbing.

Kukla said the picture looks yet worse when you consider that some subprime borrowers are paying auto loan interest rates above 20 percent.

“You put all those things together, and that’s a recipe for folks not being able to repay their car loans,” he said. “And it means that eventually the number of people losing their cars could significantly increase.”

What’s more, he said, people often need their vehicles to get to work, so they might sacrifice other important expenses to pay off loans that exceed the value of their cars.

Jenna Grodecki in Kalamazoo, Michigan, isn’t crazy about the financing terms she got from a credit union this past April to purchase a 2013 Ford Fusion. She’s 25, and though she isn’t a subprime borrower, she does have a lot of student loans.

To get the size and quality vehicle she wanted, Grodecki had to take a loan term of 76 months — more than six years.

“At that point in time, it was kind of the only option that I had,” she said.

Grodecki said she hopes she’ll eventually earn more and can pay it off faster. Meanwhile, she said she advises friends not to make the same mistake.