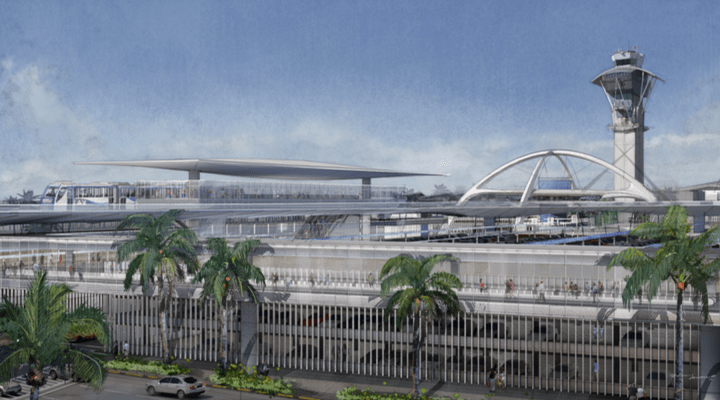 Deborah Flint is about to celebrate two years as CEO of Los Angeles World Airports, a job that puts her in charge of Los Angeles International Airport and Van Nuys Airport. LAX was already in the middle of a multibillion dollar renovation project, which Flint continues to helm. It includes renovating terminals and finally linking the second busiest airport in the country with the city’s metro system.

Deborah Flint: Thanks for being here at LAX.

Kai Ryssdal: Well, it’s weird to be out here and not catching a plane, as I was just saying before we turned the microphones on. How much time actually do you spend at LAX as a customer, as an actual passenger?

Flint: Far less time than I’m here no doubt. But I do get to have my own unique passenger experiences.

Ryssdal: So what do you think of the passenger experience at LAX?

Flint: I love the opportunities to be out in the terminals. It’s the part of the airports that I actually love the most rather than being here in the conference rooms. But this is where the magic happens for the passenger. And, you know, LAX is just this iconic, incredible airport. You see over 200,000 passengers a day coming through here.

Ryssdal: When they called you and said, “Hey, listen, we’ve got this job. But there are some downsides. It’s old. It’s crowded. We’re in the middle of a gazillion dollar renovation program. It’s going to be a heavy lift.” What was your reaction?

Flint: Serendipity. I had been always watching LAX, and the city of Los Angeles is so fresh, it’s so cool, it’s so vibrant. It’s the entertainment capital. LAX to me is the brand that should set the stage for national aviation as well as global aviation. But because of my industry background, it also was clear to me for a long time that LAX needed to be in this transformative era.

Ryssdal: So, I’m a United guy. Spent a lot of time in Terminal 7, and they’re there rehabbing them, and it’s great and it’s nice. You all just did the big Delta move from Terminal 5 to 2 —

Flint: Yeah, they switched from the north to the south—

Rysdal: How much time do you spend on the phone with, say, Ed Bastian at Delta. Or Oscar Munoz at United?

Flint: They are very involved when it comes to making the deals here at the airport. LAX is unique in that many of the large hub airports across the country may have one single dominant air carrier. At LAX, we have not one airline that has more than 20 percent market share. That’s great for the passengers. The fares are competitive as a result of competition. And that’s the model that should be in place for airports around the country — one of the reasons why airports are seeking to find new funding mechanisms that’s not necessarily held by just one airline.

Ryssdal: So play that out a little bit. You’re part of the city of Los Angeles government structure. You get fees from airlines. Where else do you get revenue, and how can you grow your revenue to do this big renovation that you’re in the middle of for the next six, eight years?

Flint: A happy passenger is a spending passenger, and that’s incredibly important to us, because the federal government says to airports, “Airports, we want you to be self-sustaining, meaning whatever money you generate, you need to keep to the airport so that you can support your operations and your capital development program.” And so a key to that is what we call our passenger facility charge, and as an industry been working really hard to try and get that modernize and increased to —

Ryssdal: What I hear you saying when you say modernize and increased is that passengers are going to be paying more.

Flint: Paying more to increase it to what it originally was authorized at. But paying more in one regard goes directly back to your own local airport in better passenger experience, less lines, chargers, for instance, for you to have when you’re waiting for your flights. I mean, these are your local governments spending that fee for the betterment of your experience.

Ryssdal: Who’s your competition? Because it’s not like I’ve got a whole lot of choices if I have to fly from Los Angeles to somewhere. I mean, I could go to John Wayne down in Orange County, I could go to Ontario I suppose —

Flint: You could. And those are real choices. Airports are very competitive. International flights in particular are so attractive to the local economy. Over $70 million is generated from one international flight in terms of jobs and spending. I appreciate the 50,000-plus jobs that are right here at LAX, and we still have more people that we want to see get good jobs and work here because of the airports.

Listen to the full interview on the Corner Office podcast.