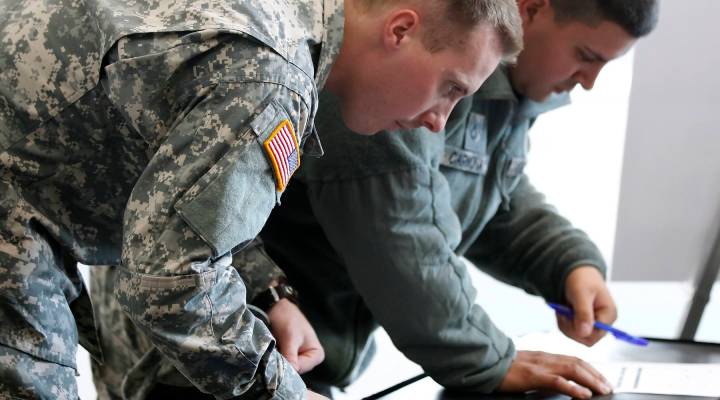 You’ve probably heard by now: the tech industry is in need of talent. Some companies are looking to veterans of the military to fill those roles.

Amazon has partnered with the Department of Labor, creating the Amazon Veterans Apprenticeship Program.  Veterans enrolled in the 16-week program train for positions in cloud computing.

Ardine Williams is vice president of talent acquisition for Amazon Web Services, and she’s also a veteran herself. Williams spoke with Marketplace’s Molly Wood about the difficulties of finding a civilian job, and Amazon’s efforts to help. Below is an edited excerpt of their conversation.

Ardine Williams: The challenge that people have on the tech side is, in many cases, the technology that they’ve been working with doesn’t change as quickly in the military as it does in the civilian sector, and so helping veterans who are a good fit culturally and have good basic technical skills learn that next, more state of the art capability is really what helps bridge them into a role in tech, and then open up other career opportunities.

Molly Wood: What other things about the transition might be hard for veterans coming into the private sector, Amazon in particular?

Williams: You have to be willing to take a stand and say this is what I want to do. We have thousands of job openings at Amazon and I get contacted regularly by veterans who say “I’m really a capable leader and I can do just about anything.” And I don’t have any jobs like that. I need someone to come and say “Hey, these are three jobs that are a great fit for me” and “I want to be a project manager in supply chain.” It’s a very different experience in the military where you have a branch officer or someone the career side saying, “Hey Ardine, we’re going to send you to Fort X and you’re going to do Y.”

Wood: The tech industry takes a lot of criticism for being in a bubble in a lot of ways. Do you think that hiring from the military, creating a pathway for veterans, could improve the sort of pipeline problem that the tech industry often cites in terms of improving diversity? Or is the military its own bubble?

Williams: While it’s imperfect, the military is a relatively good snapshot demographically of the U.S., not geographically perfect, but from a demographic perspective if you look at gender and ethnicity. So in that regard, it’s a very valuable pipeline for any industry.

Wood: How will you know if you’ve succeeded?

Williams: The first piece for me is “are they successful, are we actually able to bring people in?” and then, “can we scale it,  can I grow it to be a very robust pipeline?” So late last year, we worked with the Department of Labor to build an apprenticeship program and we’re running a number of cohorts this year in different locations. And success to me will be that we have a great graduation rate from those programs and that those graduates go on to roles that continue to increase in responsibility at Amazon.

You can listen to the full interview by clicking the audio player above.