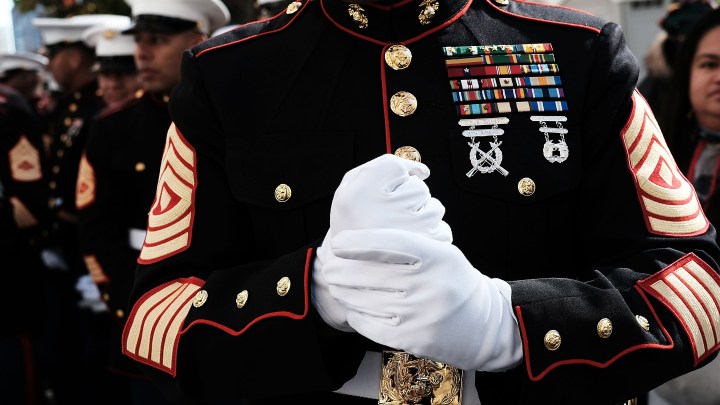 COPY
The type of discharge a veteran has matters for the types of benefits they receive and can affect future employment. Spencer Platt/Getty Images

The type of discharge a veteran has matters for the types of benefits they receive and can affect future employment. Spencer Platt/Getty Images
Listen Now

For the 12 years she was in the Navy, La Wanda Mobley said she was pretty much the ideal service member.

“I had a stellar career, I had medals, my performance evaluations were always the highest marks that you could receive, everybody spoke highly of me,” said Mobley, who now lives in New York.

Mobley was also a lesbian in the military, and said the sexual harassment she experienced as a result led her to “self-medicate” with drugs like cocaine.

“Because of the things that happened and I self-medicated, that ultimately is what led to my discharge, and my sexual orientation definitely played a role in why I was a victim of MST [military sexual trauma],” said Mobley.

Mobley said being “other than honorably” discharged from the military set off a spiral of drug and alcohol abuse for the next 13 to 14 years, but she eventually got sober and realized she’d left a lot of veterans’ benefits on the table. She is now receiving them and even works for the Department of Veterans Affairs.

But her experience reflects the complicated dynamic for many of what it meant to serve as LGBTQ in the military. While some people were discharged specifically for their sexual orientation, many others have related charges that contributed to their ouster.

“There’s about 114,000 veterans that were discharged either ‘other than honorably’ or ‘dishonorably,’ because of just simply being LGB and trying to serve in the military under discriminatory policies,” said Jennifer Dane of the Modern Military Association of America (MMAA), which represents LGBTQ service members and veterans. She specifies lesbian, gay and bisexual, since the ban on transgender service members is still in place.

And the type of discharge a veteran has matters for the types of benefits they receive. Access to VA home loans and GI Bill educational benefits. Even the type of VA health care someone receives can be tied to discharge status. Veterans who were denied benefits because of their sexual orientation can apply to the Department of Defense to have their discharges upgraded.

“This is a stain on the record. This ends careers,” said Ashton Stewart, who runs the SAGEVets program which focuses on older LGBTQ New Yorkers who served in the military.

“One of the veterans that we’re talking to told me a scenario that he was applying for a job, things were going great. They had a really friendly hiring program for veterans,” Stewart recalled. “He had a security clearance while he was in the army. But they kicked him out with other than honorable for his sexual orientation. And [the employer] told him to his face that ‘we would hire you on the spot, but we just can’t take that risk.’”

The VA website says upgrading a discharge can take a year, but Dane at the MMAA said there’s a backlog, which has only gotten worse in the pandemic.

“We are lucky if we see any changes within two years,” she said. “And we’re lucky if we get that. Sometimes we get it within 18 months. And sometimes it’s three or four years.”

The Department of Defense wouldn’t make anyone available for an interview for this story and did not respond to our specific questions on discharge upgrades for LGBTQ veterans.

How veterans are faring in the tight labor market